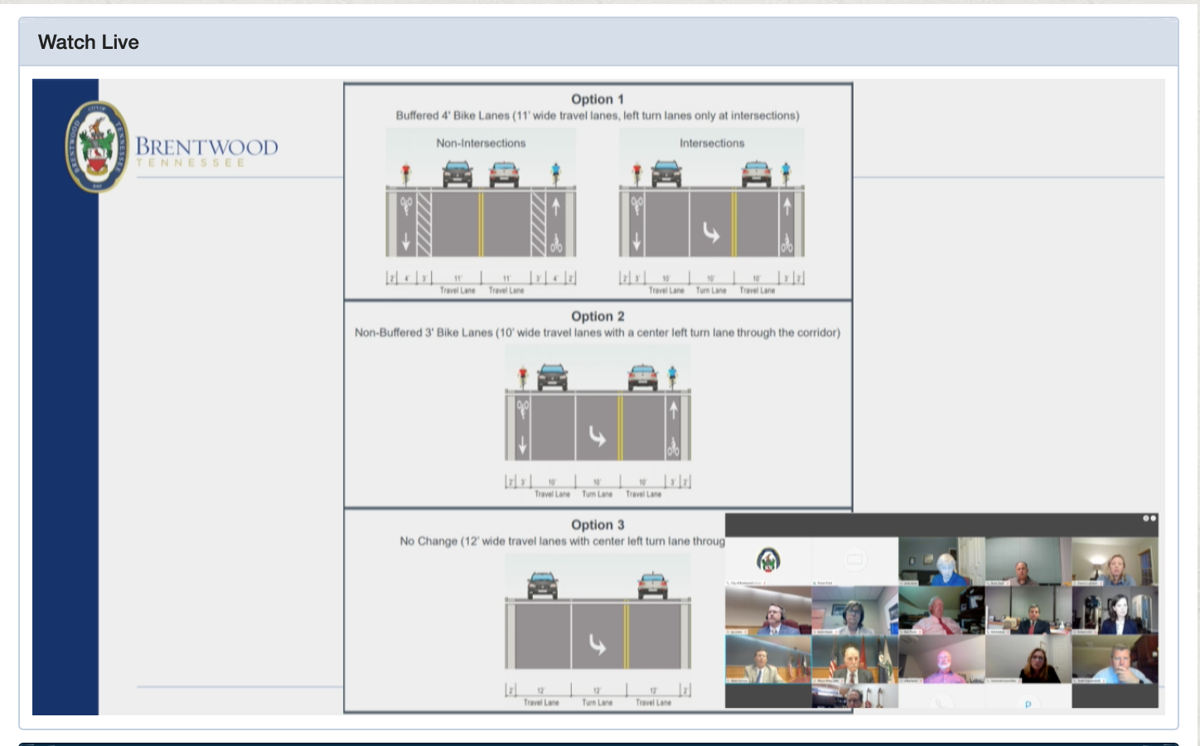 On Monday night, the Brentwood City Commission approved the installation of bicycle lanes on Granny White Pike when the road is repaved this summer.

The topic of bike lanes has been long discussed by the city with input from the citizen-led Brentwood Bike and Pedestrian Ad Hoc Committee as well as at public comment opportunities in February and online.

“All of them said option 2 they could live with, and I think that says a lot about us trying to address the needs, the safety, what both groups really wanted in the end and we’ll just go forward from there,” Commissioner Smithson said in the meeting. “And I will say, I have gotten so many comments from people who appreciate us trying to expand the bikeways and the walking paths in Brentwood."

According to a news release, the engineering firm Kimley-Horn worked with the city to develop three options, with "option two," a non-buffered three-foot bike lane with 10-foot-wide travel lanes and a center left turn lane through the corridor, finally approved with a vote of 6 to 1.

Gorman said that it was a tough decision to vote no on the agenda item, but cited the amount of people that would use the non-buffered bike lanes, adding that he had spoken with some people who he said expressed that they wouldn’t cycle on Granny White Pike without fully-buffered bike lanes, which was considered as "option 1."

“I can’t vote in favor of this because it’s just not going to serve the general population like I originally thought we could get connectivity here,” Gorman said. “I think we need to continue to look where we can add bike paths and walking trails and I think we need to visit our zoning.”

Safety was a topic of discussion during the commission meeting when Brentwood citizen and 2020 Bike Walk Brentwood Board Chairman Richard Hunter alleged during citizen's comments that an unidentified Brentwood resident ran him off the road while he was cycling in April.

Hunter said that the incident was reported to police, and according to Brentwood Police Department Public Information Officer Cpt. Richard Hickey, there was no evidence in the allegations that would allow the department to press charges as the driver denied that the incident occurred.

"We need more and safer places for us to get out and bike," Hunter said in the meeting.

Commissioners, who were participating in the meeting electronically due to the ongoing COVID-19 pandemic, discussed the issue and what would be best for everyone, drivers and bikers alike, as well as residents who live along Granny White Pike.

The city has settled on the use of a heavy-duty green epoxy paint at several intersections to as well as green backgrounds for each of the required bike lane symbols to indicate the bike lane.

“Given the traffic levels on the road, any change to the lane configuration would have an impact on the nearby residents as well as those who routinely travel the road,” City Manager Kirk Bednar said. “We plan to use this through the intersections and with the symbols to create better visibility of the bike lanes and safety for those using them."

According to the online agenda, the Granny White Pike repaving project is estimated at $36,000, with sufficient funds for the summer 2020 project to come from the Bike/Pedestrian project in the Capital Projects Fund budget.