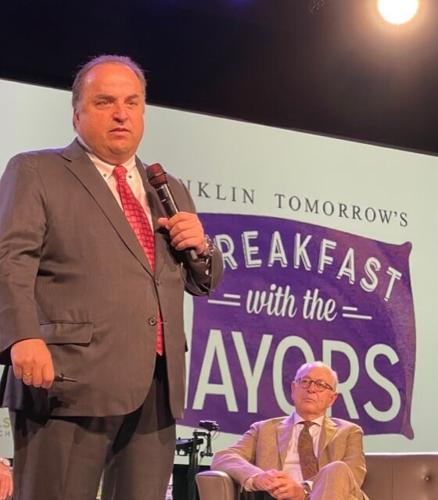 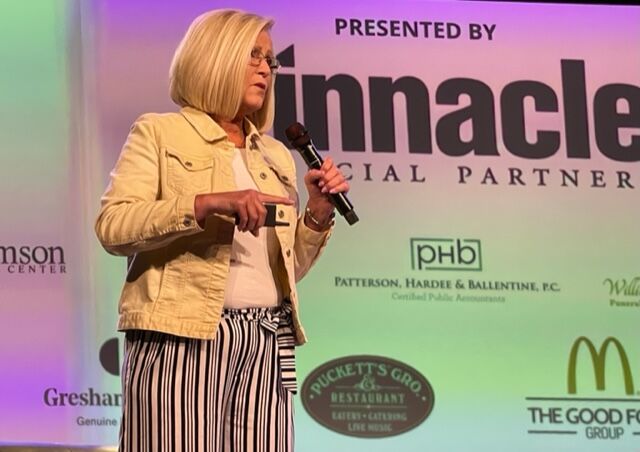 As he helped to kick off Franklin Tomorrow’s most recent Breakfast with the Mayors at Rolling Hills Community Church earlier this week, Franklin Mayor Ken Moore asked for a show of hands.

“How many of you know CPR?” Moore inquired, looking out toward the audience and a significant number of raised arms. “Way to go,” he said. “Good.”

“I challenge every single one of you to learn about how to prevent suicide. What are those signs that you need to be looking for in your family, your friends, and ask those questions.”

Though this quarter’s Breakfast with the Mayors took a look at health care in general and featured Cathy Montgomery from the Williamson County Health Department and Phil Mazzuca from Williamson Medical Center, Moore made it a point to focus on mental, or behavioral, health — a topic, he said, that’s still hush-hush in many ways.

Moore told of how Franklin had been designated as one of the state’s healthier communities a few years ago, with concentration on obesity, tobacco cessation, activity and mental health.

“We were excited about that, but what we found was that it was very challenging to get anybody to talk about the mental health aspect,” he said. “Nobody minded talking about being fat, not getting exercise and smoking. Those were easy. But to get people to have that conversation about mental health was difficult.”

Soon after, Moore explained, several organizations and health care leaders came together to place an emphasis on raising awareness about mental health and, especially, suicide. Working with others, Moore helped lead the way to the Find Hope Franklin initiative and website.

“We embarked on a mission to try to educate our community on suicide and mental health,” he said.

The Williamson County Health Department has partnered with Vanderbilt Medical Center and Ascension St. Thomas to develop a community health needs assessment, and a cornerstone of that is behavioral health. Other points of focus are affordable housing, healthy living and prevention, and substance misuse.

“Some of the information that came out of our discussion about mental health were ratio of providers in Williamson County compared to our growth in population,” said Montgomery, director of the county’s Health Department. “Also, the affordability of mental health counseling is a factor. A lot of insurance plans don’t cover the cost of behavioral health and so this became a cost burden too.

“In addition, suicide deaths were also something that surfaced to the top under mental health. We’ve been tracking suicide numbers since about 2013, and on average Williamson County numbers about 30-32 deaths per year due to suicide.”

Mazzuca, CEO of Williamson Medical Center, presented many of the details and highlights of the recently announced expansion of the facility. Within the new addition to the medical center are adjustments that will make the emergency room more secure for patients with mental health concerns or in crisis. Mazzuca said through the years he has seen an increase in incidents of behavioral health patients entering a hospital’s ER.

“Behavioral health doesn’t have a lot of easy access to care so they come to hospital emergency rooms,” Mazzuca said. "And in our current emergency rooms, we take care of the patients, but it’s not in a safe or secure area within the main ER.

“When I thought about this,” he continued, “I said we’ve got to do something so that we have a safer and more secure environment for behavioral health patients coming to our ER. One of the things we’re doing is we’re putting in an eight-bed secure pod. We’ll have locked doors that will be able to keep patients and staff safer. This was really an important issue for us, to make sure we handled this increase in behavioral health.”

Click here to view the full program from Breakfast with the Mayors.