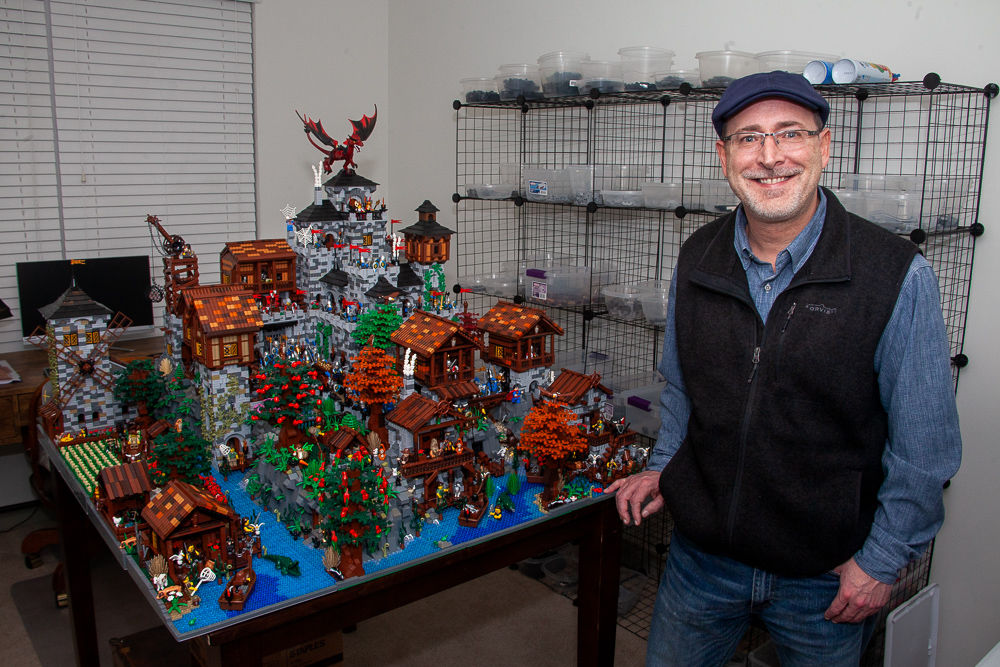 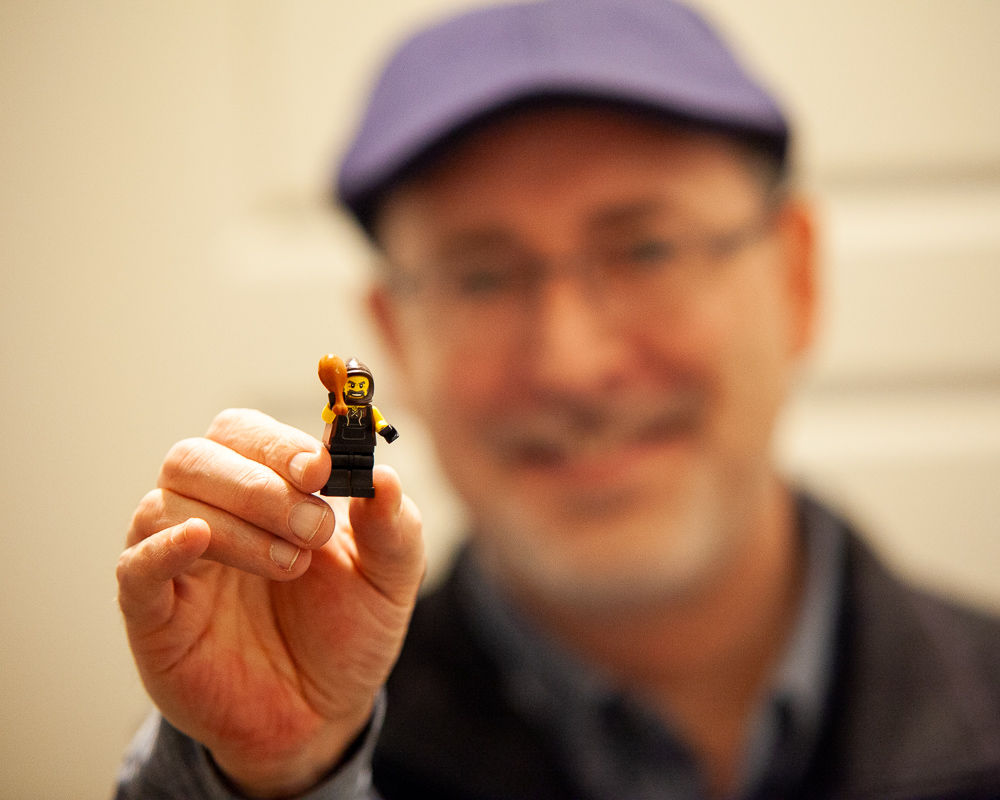 LEGO artist Lee Gould's shows off a figure named Alexander who represents himself in his massive 40,000-brick build titled, 'The Land of Alderon.’ 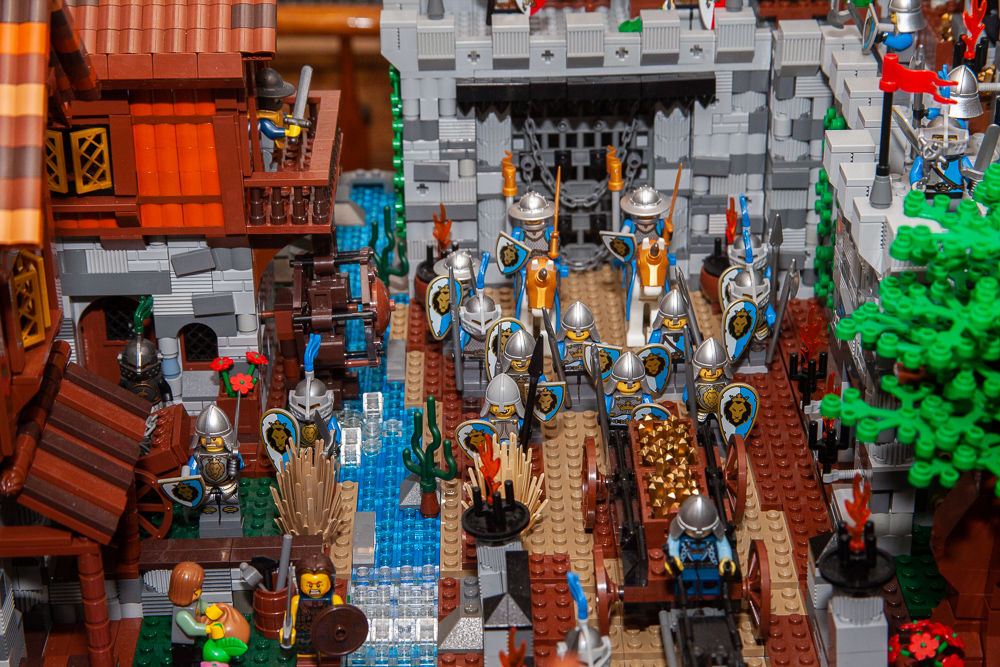 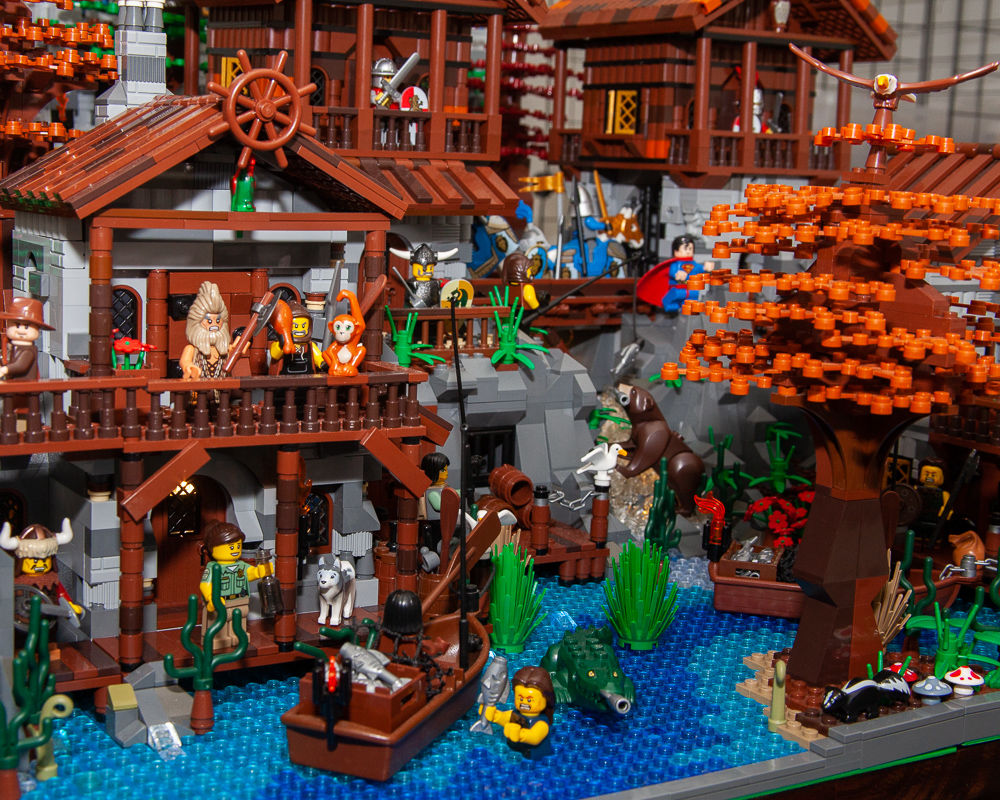 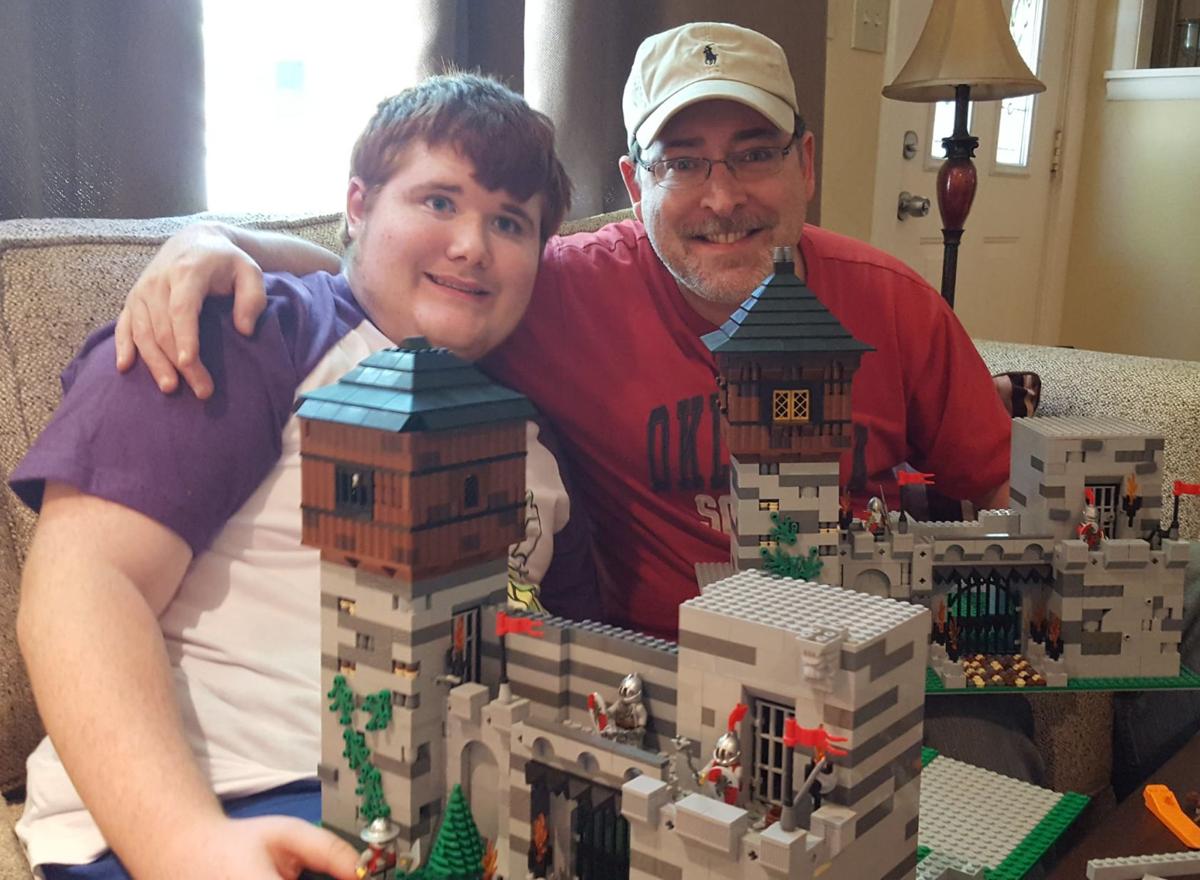 Brentwood resident Lee Gould is a part of a growing number of artists who have transformed LEGOs from a simple toy to one of the world's most important and democratic mediums in contemporary art.

Gould grew up in a family that couldn’t afford LEGOs,  but like most children, he fell in love with their simplicity and near limitless creative potential playing with the classic toys at friends houses.

Gould has three sons of his own and made sure to introduce them to the toys that they played with throughout their childhood.

“When I started in my professional career in healthcare I bought my sons kits and we had a great time together and when they got older I needed to find a hobby,” Gould said.

Gould’s sons are now college aged, but about 10 years ago when they were teenagers, Gould rediscovered his love of LEGOs, a love that he had no idea would set him on a new path of artistic expression.

“There was this big tub of LEGOs from the boy’s rooms and one day I came home after work and I started building and then I just never quit,” Gould said. “I call it my ‘Peter Pan hobby.' It’s my passion, it’s an addiction, and it’s something that’s a great balance with my day job.”

Gould has now been working as a serious LEGO artist for about five years, inspired by his love of architecture, buildings and landscapes, specifically a fascination with medieval castles.

Gould moved to Brentwood a little over two years ago from Tulsa, Okla., where he first became involved with BrickUniverse, a LEGO fan convention that travels across the United States.

“LEGO is probably the most timeless and enduring toy brand in the world,” Gould said. “The possibilities are just endless, and most of us who present our LEGO art at these conventions call it art and some folks use metal or wood or paint or musical notes  and our preferred medium is the ubiquitous LEGO brick. You know, there’s thousands of types, an immense color palette and it’s a fairly odd hobby but it’s one that’s growing throughout the world, especially with adults. About half of LEGO purchases now are from adults who are buying for adults.”

BrickUniverse made its second appearance at the Wilson County Expo Center in Lebanon, Tenn., during the first weekend of January.

BrickUniverse attracted thousands of visitors to the Expo Center in both 2019 and 2020 including LEGO artists superstars Paul Hetherington, Jonathan Lopes and Rocco Buttliere.

"We spend a lot of time together when we go to different shows, learning new techniques, exchanging ideas," Gould said. "They're big inspirations. I'm considered kind of a warm-up act because I don't do this full time, but they have made a career out of this. You're seeing more and more people making careers out of LEGO — six-figure salaries, being paid to headline conventions, they teach private LEGO lessons, getting commissioned [to make] work."

It was here that Gould’s work was most recently displayed, an opportunity that he said has opened the door to networking with other artists and a chance to share his love with visitors of all ages.

Gould showed off his massive 40,000-brick build titled, “The Land of Alderon,’ — yes, it’s Star Wars inspired just spelled and pronounced differently — that is an ever-evolving piece, which includes a 35 lbs medieval castle with a red dragon perched on top surrounded by guard towers, a fisherman’s wharf with varying depths of water, a working windmill, rows of corn guarded by a scarecrow, waterfalls, and of course LEGO knights, commoners, animals and so much more.

Gould estimates that he has put 300 hours into the piece over about six months — the pieces also has touches like flickering orange led torches, lights that simulate rushing water beneath clear bricks as well as a fog machine and theme-appropriate music.

Gould isn’t near done as he is expanding on the colossal construction with a future village and whatever else his imagination comes up with.

Gould said that he prefers to free-build, working without instructions or themed kits in order to reduce limitations on his creativity.

"Life doesn't come with an instruction kit," Gould said. "Anybody can do it, it just takes work."

LEGO began as interlocking wooden toys in Denmark in 1932 before transitioning to the well-known plastic bricks in 1958 and finalized in 1969.

While they are still sold in the toy section of stores across the world, the brand has become an iconic staple across entertainment industries from toys to video games and movies, taking over pop culture in its inevitable ascension to an accepted art form, having been displayed in art galleries and public exhibits around the world.

That seriousness of the art is in every aspect of Gould's builds as he is constantly working to add little additions like smoke rising from chimneys, a hidden cave with treasures or a tower still under construction as a way to add life into the inanimate and tell a story in every section of multi-colored plastic.

"Visually what I attempt to do in my large creations — my latest one is a little over 40,000 [pieces] — is to tell a story in about every 10 inches of space," Gould said. "So you can look at 10 inches of space and be immersed in it for about a minute and picture yourself tending to the crops or milking a cow or fishing or fending off the barbarians who are trying to capture your wagon full of gold. So my goal is to make them as sticky as possible, with the hopes that people will stay in front of that creation for several minutes before they move on."

For Gould what began as a creative outlet has transformed into a way to give back and inspire others to explore their limitless creativity within those little plastic bricks.

"When I was in Tulsa I taught a lot of lessons, especially to autistic children. I found out early on early on at the conventions in Tulsa that LEGO is a wonderful form of therapy for individuals on the autism spectrum. So I learned how to work with these children, and I always say this, there is nothing wrong or broken with them. They simply interact with the world differently. They're beautiful, they are wickedly brilliant, and you see them in a lot of different artistic fields and LEGO is a perfect form of play that helps them expand their social network, verbal and non-verbal communication and it just gives them a great deal of joy."

Gould described on session with a child named Chance who initially hid behind his mother and made no eye contact.

"What I'm doing is teaching them about depth and texture and color and form and theme and all that," Gould said.

Gould described the growth in Chance who transitioned throughout each session to making eye contact, giving Gould a hug, to communicating and introducing his own style of creativity and building.

Chance eventually displayed his work in public, showing off his own imagination and creativity through a parkour creation.

"By the end of it we called ourselves the Brick Brothers and we have a special bond. His mom was floored because she had not seen her child interact that way and develop the communication skills that he did," Gould said.

Gould, who is also a part of LEGO group in Nashville, said that when he retires he plans to take on the craft full-time, building, displaying, teaching and taking commissions. "I hope to be building on my deathbed," Gould said.

"Humans are just inclined to create, we're inclined build, to fashion something new, and the reason I do it is because I love it, but more importantly, again, it just goes back to the show and watching that 5-year-old smile and dream."