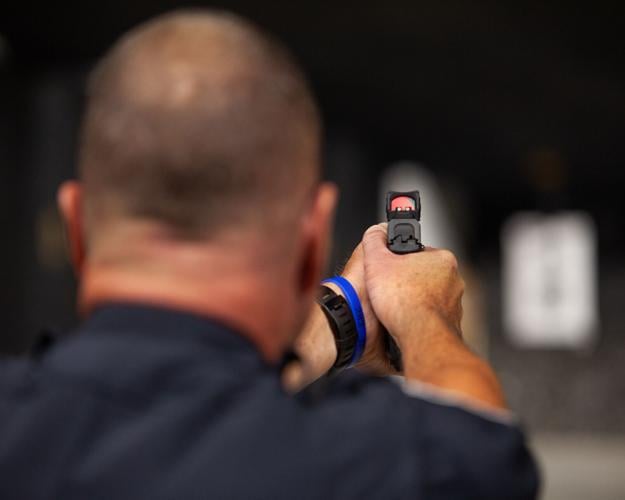 BPD Captain Alan Hardcastle demonstrates the department's new red dot sights that they are adopting for their service pistols. The shooter sees a perfect red dot which is seen refracted through the optic's glass in the photo. 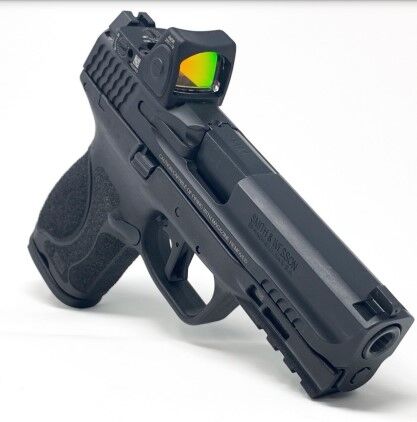 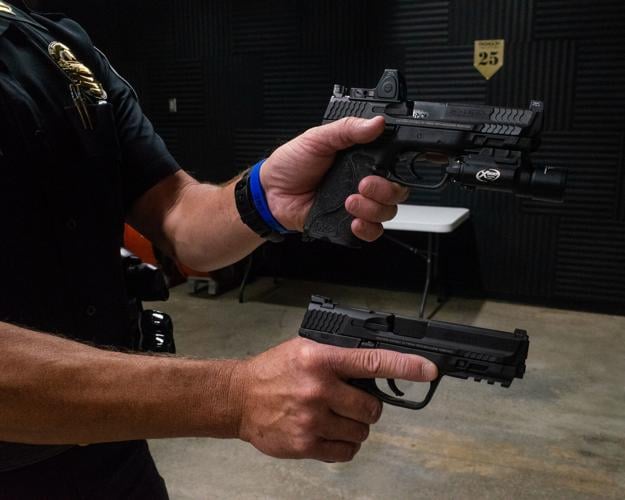 BPD Captain Alan Hardcastle shows the difference between the department's current and new service pistols which will now have red dot sights attached.

The Brentwood Police Department is upgrading its service pistols with the addition of red dot optical sights.

The Brentwood City Commission unanimously approved the purchase of new optic-ready pistols, red dot optic attachments and holsters as part of the consent agenda during Monday night’s meeting for a total combined price tag of $55,044.75, which is paid for through the Capital Projects Fund.

BPD officers are already issued the Smith and Wesson M&P M2.0 9mm pistol, but the city is trading in their current stock for new pistols of the same make and model which come ready to mount the red dot optics right out of the box.

The Commission approved the contract which sees the city purchase 75 pistols at $465.05 per gun with a trade-in value of $300 per gun that they are currently using.

The red dot sights themselves are the most expensive part of the upgrade, coming in at $421.64 per optic. The red dot sights are separate attachments that sit on top of the slide of the pistol and provides the shooter, in this case the officer, with a glass viewfinder that uses a red led light to serve as the targeting reticle.

This accessory should improve ease of shooting and accuracy at a greater distance versus the standard iron sights that utilize a small front sight and rear sight which must be aligned by the shooter.

That improvement has already been shown to the department in their internal testing before the items were purchased, with every officer who tested the optic seeing an improvement in accuracy.

“That was one of the big determining factors for us when we were asking if it was really worth it,” BPD Assistance Police Chief Richard Hickey said. “When we saw that marginal shooters did substantially better using the red dot sights, that’s when we said, yeah, this is well worth it.”

“What the red dot does for us, it takes the three focal planes out of play and gives you one focal plane,” Hardcastle said. “We know from experience that when an officer gets into a deadly-force situation, they’re going to focus on the threat -- Whatever is going to hurt them or kill them, that’s what they’re going to focus on. So what the red dot does is just allows us to have a natural point of aim.”

Hardcastle, who has seen three different service pistol upgrades over his 26 years with BPD, said that not only is it easier to accurately aim and hit targets by using the red dot sight, but many officers are familiar with the accessory either through their own personal use of the type of optics or simply through the popularity and prevalence of the accessory in the greater civilian firearms market.

When Hardcastle first joined the police force, Tritium night sights, which offer the shooter three self-glowing dots inside of a gun’s iron sights were new to the market and rare in police forces. Since that time there have been huge technological advancements within a booming firearms industry that have made those night sights standard equipment.

“We’re starting to see the trend with red dots where more and more manufacturers are either offering red dots packaged on the gun or at least making it an option to put the optic on the guns, in other words, making guns with a milled slide that will accept the sight,” Hardcastle said, adding that multiple law enforcement agencies have been adopting the red dot optic as part of their standard-issue tools.

Of course, with new equipment comes new training, but in this case it's a smooth and natural transition.

“It requires some training and some repetition on the draw stroke, teaching the officer the proper draw to find the dot,” Hardcastle said. “But once you develop that muscle-memory it becomes quicker and quicker and quicker the more you train with it. So we’re going to have a training course that we’re going to put everybody through to transition them to the red dot and then we’re going to have some supplemental stuff that we can do as well that will give them some more drills to work on to help them hone their skill.”

The red dot optic does use a small CR2032 lithium coin battery which will be changed out annually or as needed, but the officer can still use the pistol’s iron sights while the optic is attached.

While the rollout of the optic is a significant improvement to an officer's capabilities and skills, BPD is also reminding their officers and the public that their service pistols are just one of many tools at their disposal. The department says its pistols are rarely used and are reserved for when other tools and tactics have failed or for when a situation has escalated to the point of being life-threatening.

“Yeah, we’re upgrading our weapons, but still our main focus today and what we’re still spending the most time and most money on is doing things so that we never have to pull that gun out — deescalation, [asking] ‘Is this a deadly-force situation?’ — Those are the things that we’re really focusing on, hopefully so we never have to pull those [pistols] out,” Hickey said. “But if we do have to, this will make us even more proficient.”

The complete rollout of the new guns and sights is expected to be complete in early 2022 depending on availability of the products, with the pistol expected to take the longest to get in.