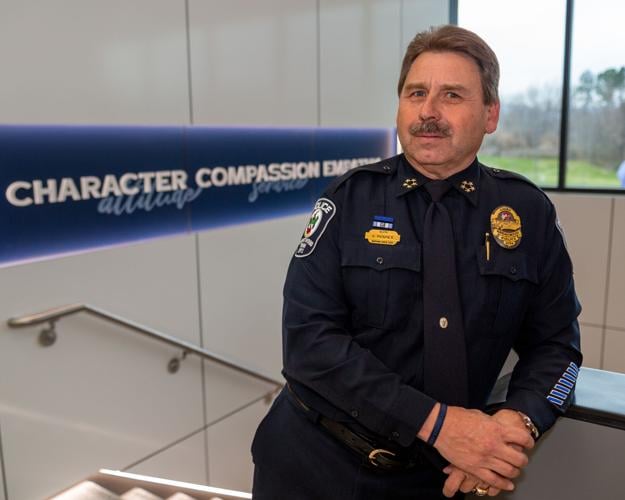 Brentwood Police Chief Jeff Hughes poses for a portrait inside of BPD's headquarters on Heritage Way ahead of his retirement in February 2022. 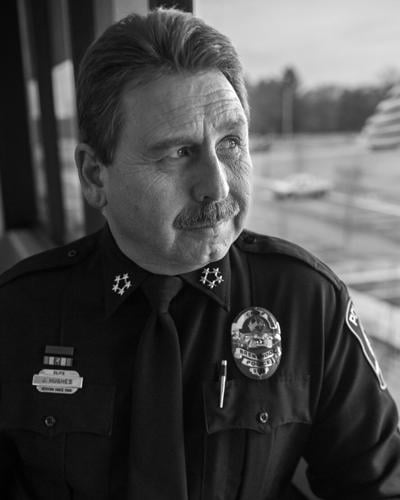 Brentwood Police Chief Jeff Hughes looks out at the city from the police headquarters on Heritage Way ahead of his retirement in February 2022. 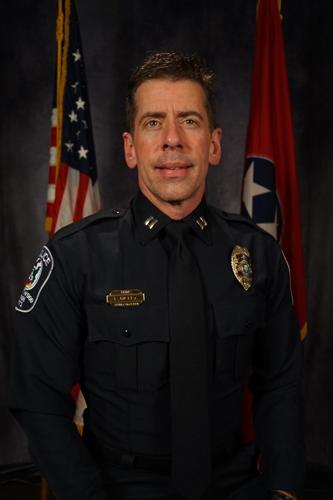 Hughes is only the third police chief in the city’s history, having served in the role since 2012, after joining BPD in 1986, 15 years after the department was founded.

He began his public safety career in 1983 when he was hired as an emergency dispatcher in his hometown of Fairview and in 1984 at the age of 21 he became a police officer with the Fairview Police Department.

“I didn’t have a clue what I was doing,” Hughes said with a laugh. “I look back on it and knowing what I know today, I would have been scared to death for that person who was me.”

Hughes started in law enforcement when the world looked very different, when the pay in Fairview was just over $12,000 a year and the annual salary for a BPD officer was $16,800.

That was a time when an officer was issued a revolver, baton, handheld radio, notepad and pen and an uncomfortable bulletproof vest that Hughes said at the time was rarely actually worn.

Hughes worked his way up the ranks to his current position but said that he never set out to be a police officer, much less BPD’s Chief of Police, even though both of his grandfathers were in law enforcement, one a Tennessee State Trooper and one a Williamson County Deputy.

“I never had a thought that I wanted to be a police officer — I wasn’t that guy — I really wasn’t sure what it was that I wanted to do for a living,” Hughes said, adding that he felt aimless as a college student fresh out of high school. “When you put a toe in law enforcement, you’re bit. The hook sank at that time, and I knew from that moment on that this is the direction I wanted to go in.”

Over the decades, change has inevitably happened, from the expansive growth of the city, county and region in both population and infrastructure to the changes in policing, from technology and training advancements to shifting public perception, the world in many ways looks very different.

“It’s night and day,” Hughes said. “There’s no comparison. If I were to go back on the street today, I would need to go through a rigorous training program because I’ve never been a policeman in a patrol car with the technology that they have today.”

One thing that hasn’t changed, Hughes said, is the support of the Brentwood community from residents to city officials.

“This community is unique — It’s more like a family even at the city level,” Hughes said. “The community support has always been tremendous here, and to be successful as police officers we have to have the support and respect of our citizens, and that has never wavered.”

Hughes said that that support extends to every commissioner and city manager, past and present, with Hughes specifically praising the work of current City Manager Kirk Bednar for his support and leadership in helping BPD reach its current state which in 2021 saw the opening of BPD’s new state-of-the-art police headquarters, the biggest capital project in the city’s history.

Bednar returned that expression of gratitude in an email to the Home Page, citing Hughes’ professionalism, leadership and dedication.

“The Brentwood Police Department has a long and rich tradition of outstanding leadership begun by Howard Buttrey, passed on to Ricky Watson, and continued by Jeff Hughes for the last ten years,” Bednar said. “While many will point to the new Police Headquarters building as Jeff’s lasting legacy, for me his greatest legacy is simply the day-to-day professional level of service provided by the men and women of the Brentwood Police Department. The culture of service and integrity ingrained in the department is a direct result of Jeff’s leadership and dedication to the department and this community.”

While Hughes is BPD’s leader, he said that his leadership style has relied more on trust, honesty, communication, constructive criticism and a decentralized command structure — respecting rank without getting caught up in the rank structure.

“I’ve never looked at it like these people work for me. I work with these people,” Hughes said. “We’re peers. The difference is that somebody’s got to be the last stop when a decision has to be made.”

“It’s about mutual respect. It’s about trusting more and controlling less,” He continued. “In other words, not micromanaging the people that you have entrusted to do the job. I have confidence that they know how to do their jobs and I need to step back and let them do it.”

Part of that leadership has been in planning ahead, not just in how the department functions in day-to-day operations or annually, but in long-term visions of the capabilities of officers on the street to the BPD command staff.

“I’ve had people tell me that when it’s time you’ll know it, and I don’t know if that’s exactly true in my case, but what’s important is that you don’t get to the end of the road without a plan. We started planning years ago,” Hughes said. “Early on, even as chief, we started thinking about a succession plan, and this is something that we were actively discussing and looking at when Chief Walsh retired — trying to plan out a course for the future of the Brentwood Police Department.”

View a video from the City of Brentwood about Hughes and BPD from 2021 below:

Hughes said that while the job does sometimes require officers to issue citations and make arrests, the culture they’ve managed to create and foster is built on treating everyone with respect and dignity and taking opportunities to give back.

This is exemplified in the department’s continued support of blood drives and charities such as the special olympics and polar plunge.

“Law enforcement is part of what we do, but it shouldn’t be the only thing we do,” Hughes said.  “We have a very high emphasis on hiring the right people to be part of this organization, and it’s first and foremost people that possess the desire to serve, and recognize that their primary responsibility is to be a public servant — someone with a servant’s heart. I look for compassion, I look for empathy and I look for communication skills. The two most important things are your ability to communicate and what’s in your heart. Why do you want to do this job in the first place?”

“I think one of the most important things that we’ve done here is that we’ve prepared for people step into those next positions and assume those roles without us ever missing a beat,” Hughes said, adding that he has “no doubt that Richard will do an exceptional job.”

Hickey said in an email that Hughes brought “new level of professionalism” to the department, specifically citing Hughes’ knowledge of CALEA, the Commission on Accreditation for Law Enforcement Agencies, and his role in boosting the training, standards, culture and selection of officers.

“He has been unwavering when it comes to ensuring that we have very high standards as it relates to the people we hire and making sure that we are hiring the best for the City of Brentwood,” Hickey said, adding that his goal in assuming the role of Police Chief is to continue many of the ideals of his predecessor.

“It’s all about people and relationships,” Hickey said. “Whether it’s the people who work here or the community at large, we have to build relationships so that everyone knows who we are, what we are about, and that we are doing our very best, even when we aren’t perfect. Brentwood is a special place. It’s the kind of community that still supports law enforcement and wants us to be out on the street and being proactive in making the city the safest place it can be. It’s our job to earn that support and trust every day and never take it for granted.”

As with any 36-year career, there are highs and lows, successes and challenges, too many to count, but for Hughes the memories always comes back to the people behind the badge.

“I had the privilege of serving in just about every capacity, because I started out in patrol and then went into criminal investigations, so for 10 years I got to investigate and prosecute cases,” Hughes said, reflecting on his long-time partner Tommy Campsey and what he called “probably one of the most enjoyable periods” of his career before he moved on into administrative roles that while less exciting, opened his eyes to different roles, responsibilities and impacts he could have in the department, such as implementing a new physical fitness standard in 2013 which has had positive impacts department-wide.

For Hughes, the worst day of the job wasn’t so long ago, when BPD Officer Destin Legieza was killed on duty in a traffic crash on Franklin Road in the summer of 2020.

“There are days that are horrific. To get that call as chief of police … I don’t have children, but in a sense [that's how] I view these folks that work here. They are my responsibility,” He said. “That’s something I wouldn’t wish on anyone, but for our people, I think it’s made us closer as a result, but that was most definitely the darkest day of my career.”

Hughes will officially retire on Feb. 25, after which he plans to spend time on his Fairview farm that’s been in his family for generations and make some time to ride horses, play golf and travel, but his impact and legacy will no doubt continue to be felt right in the heart of Brentwood.