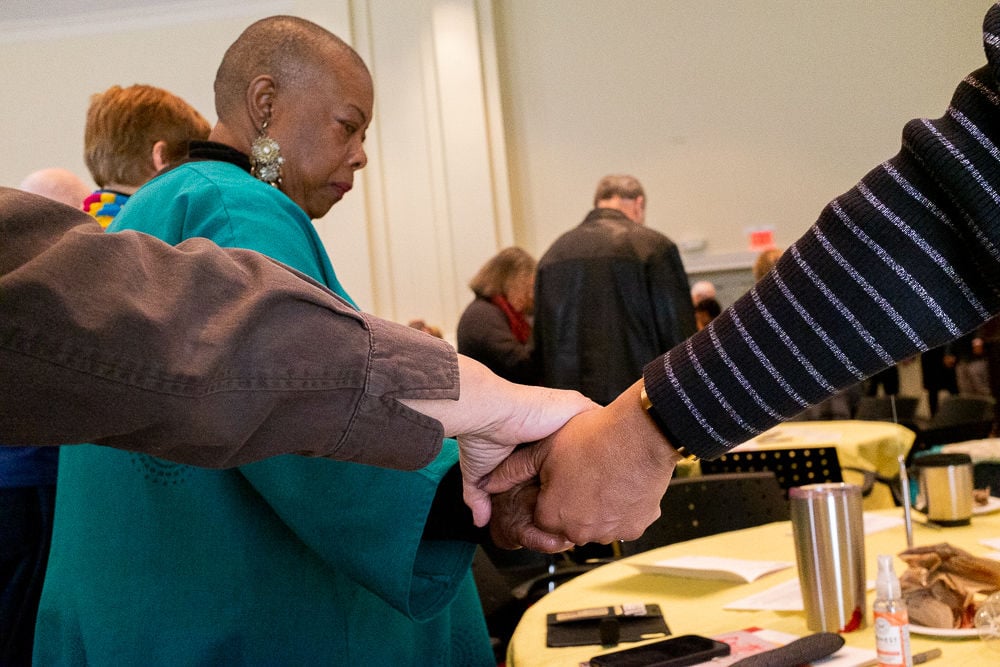 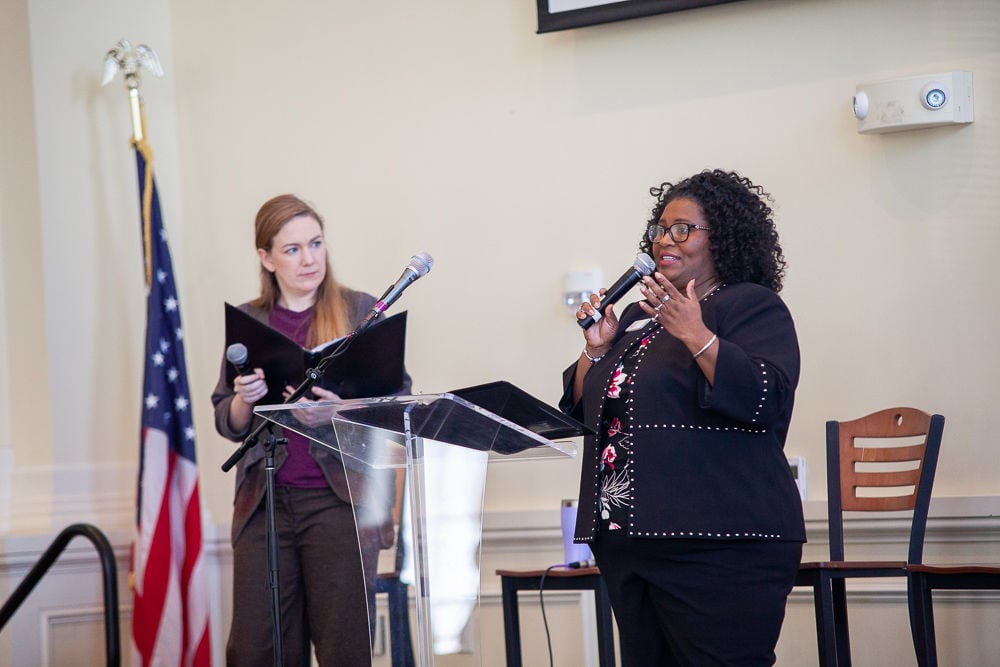 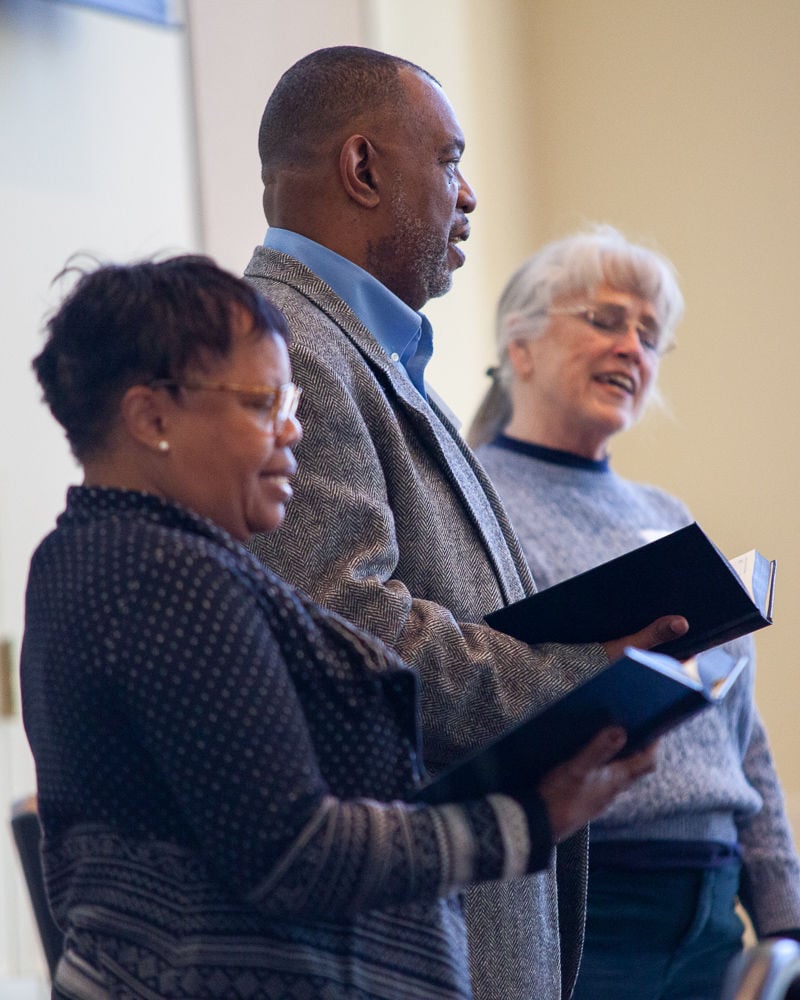 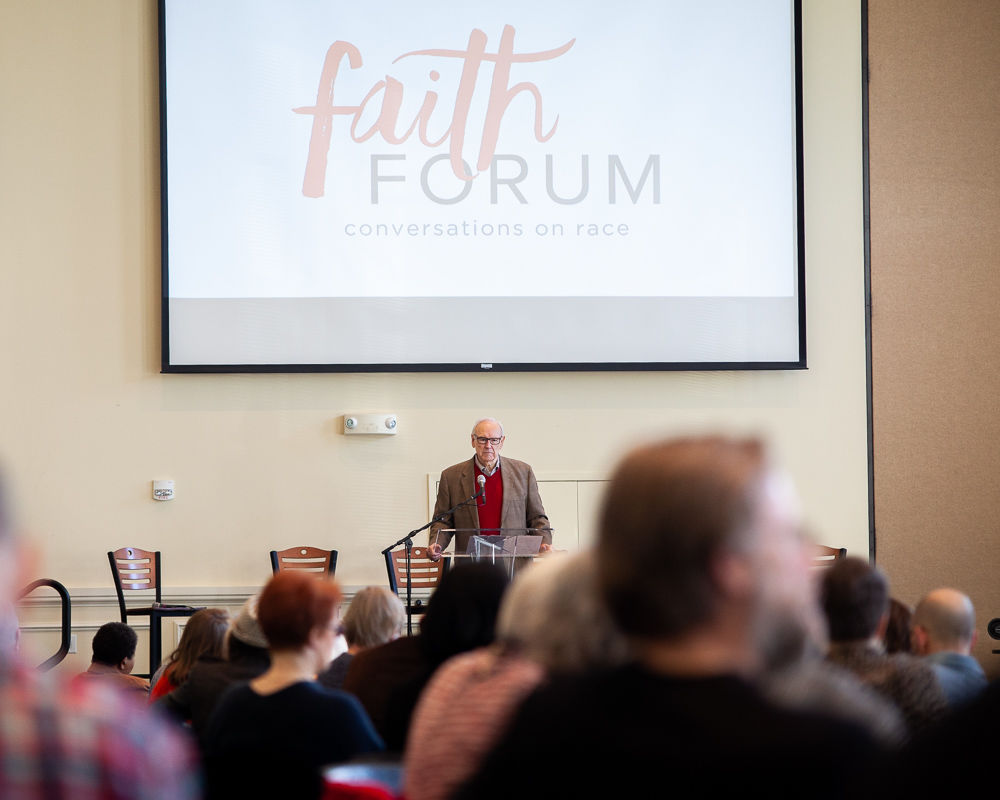 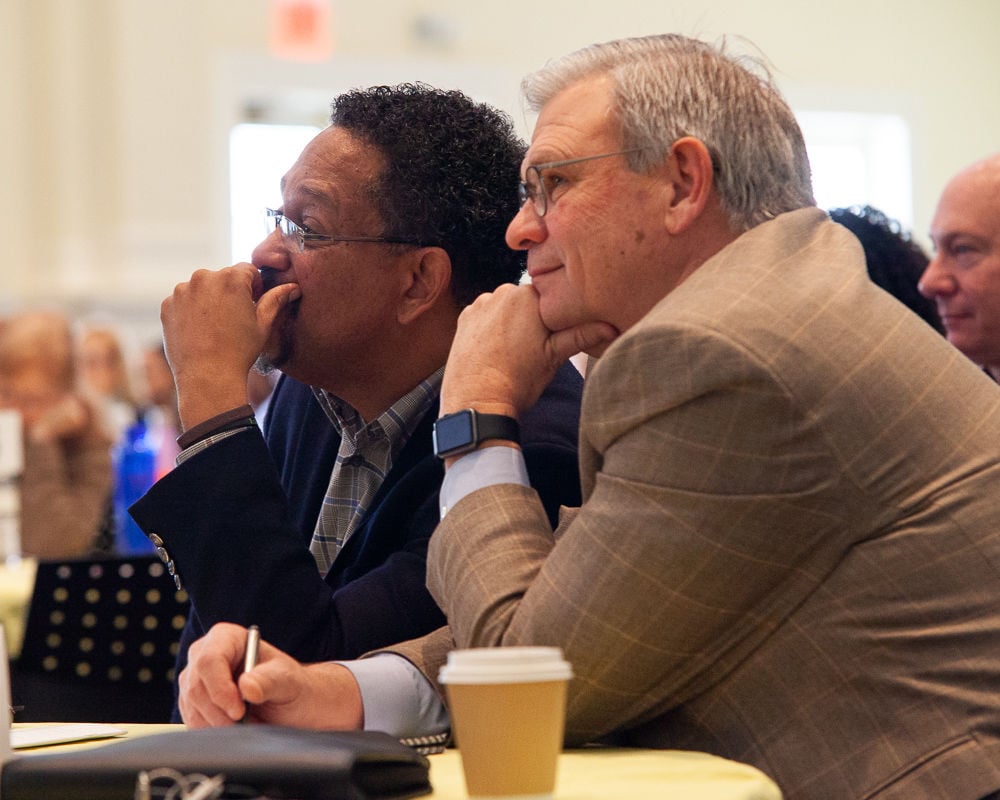 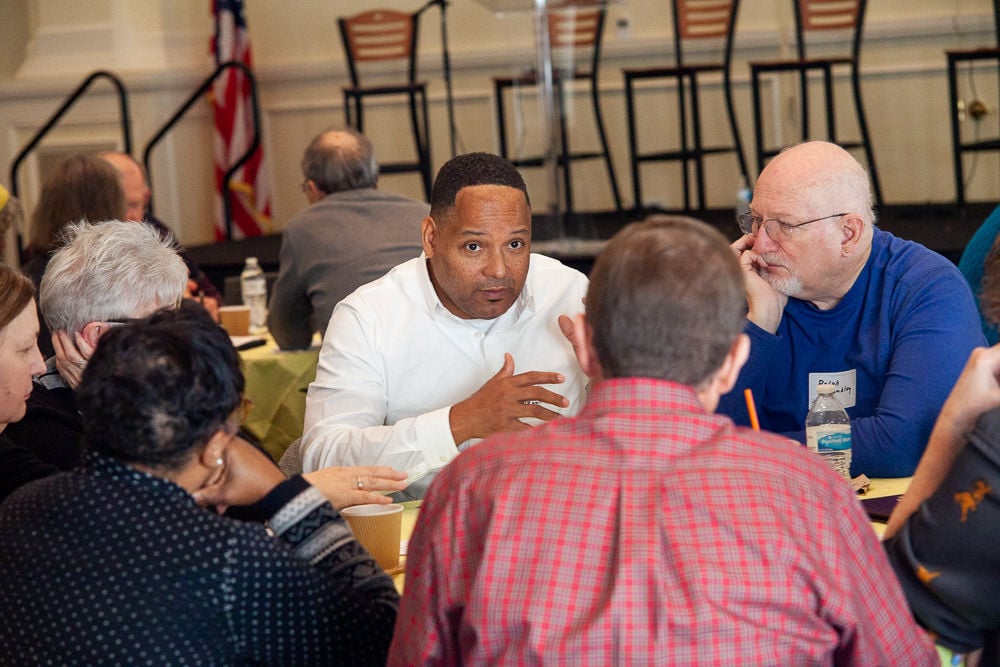 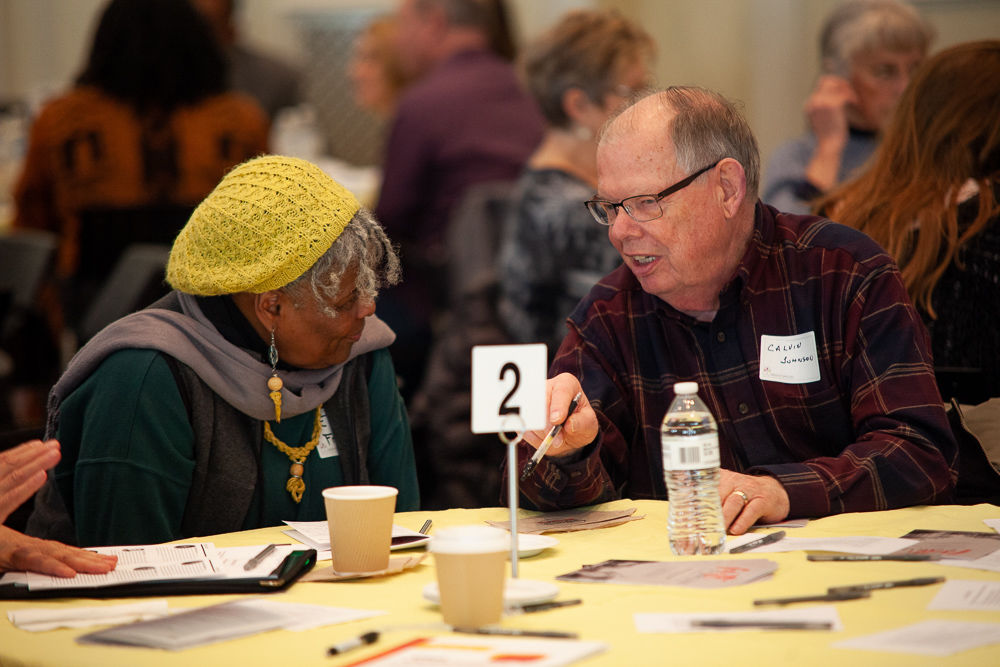 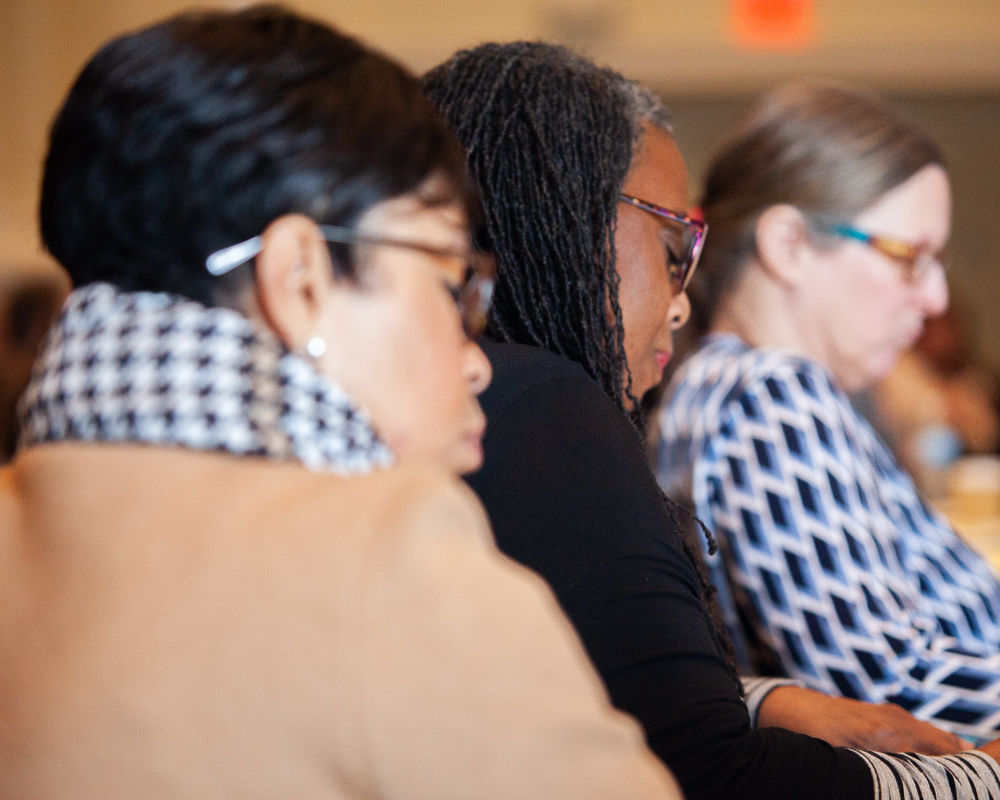 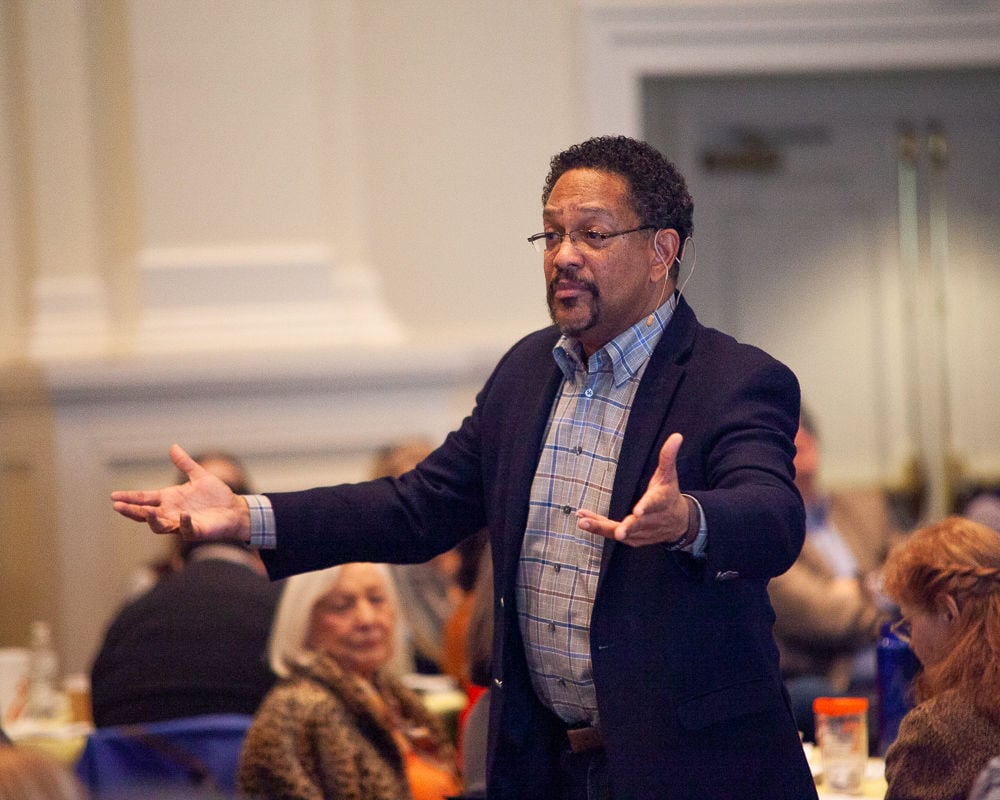 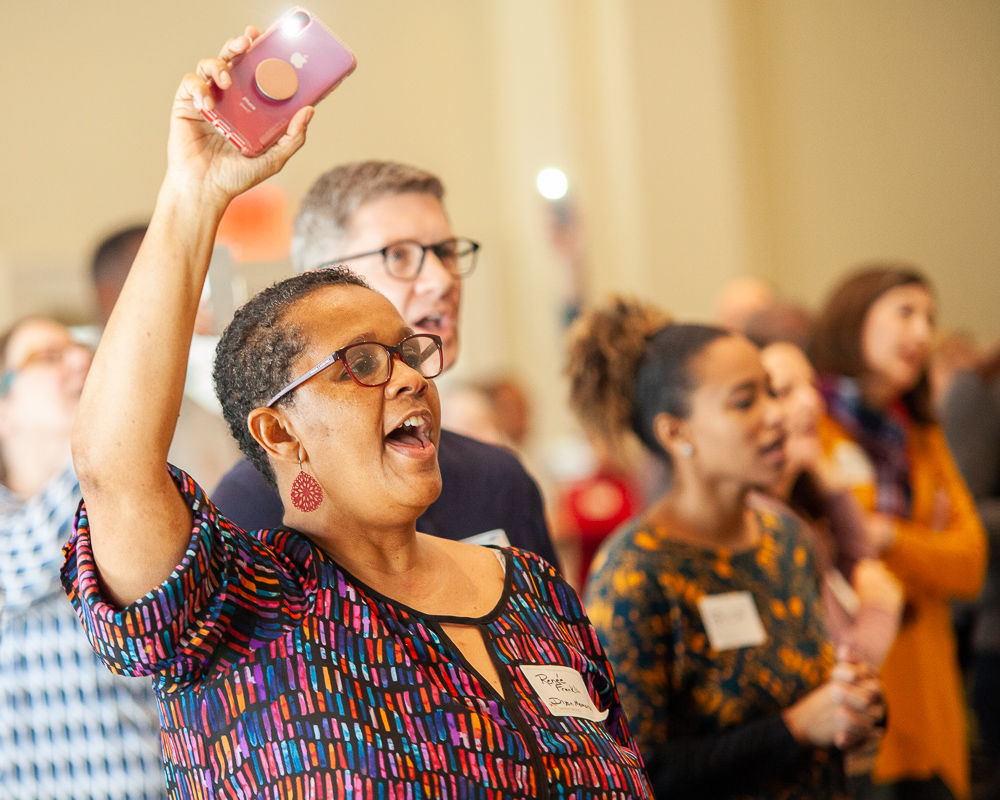 Attendees hold cell phone flashlights while they sing "This Little Light of Mine" at   Brentwood UMC's Faith Forum: Conversations on Race. 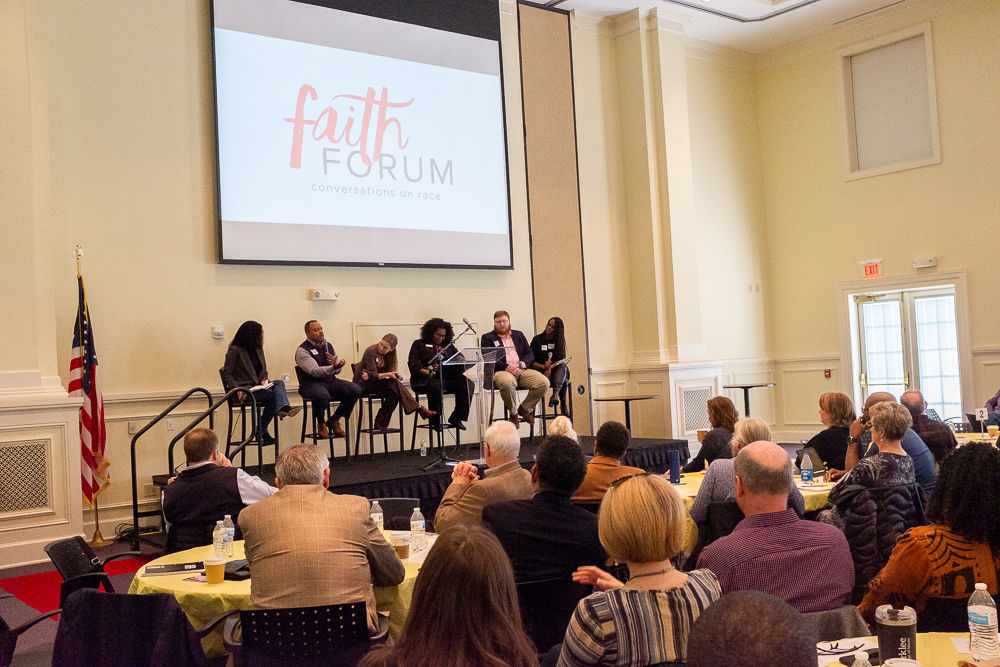 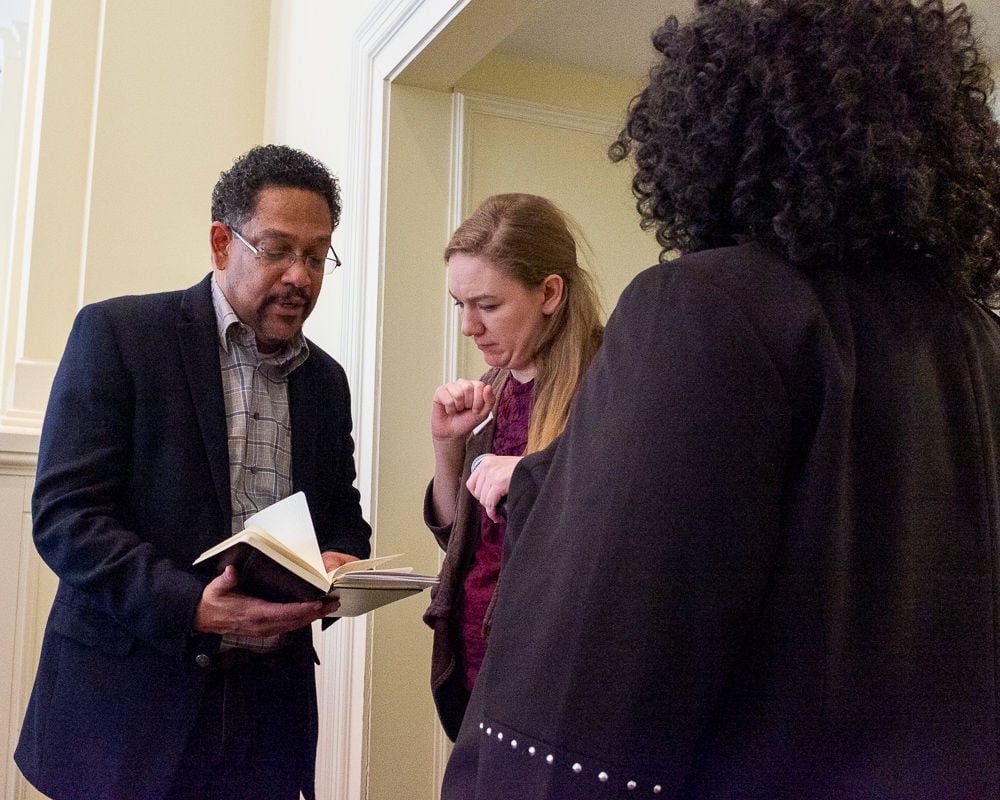 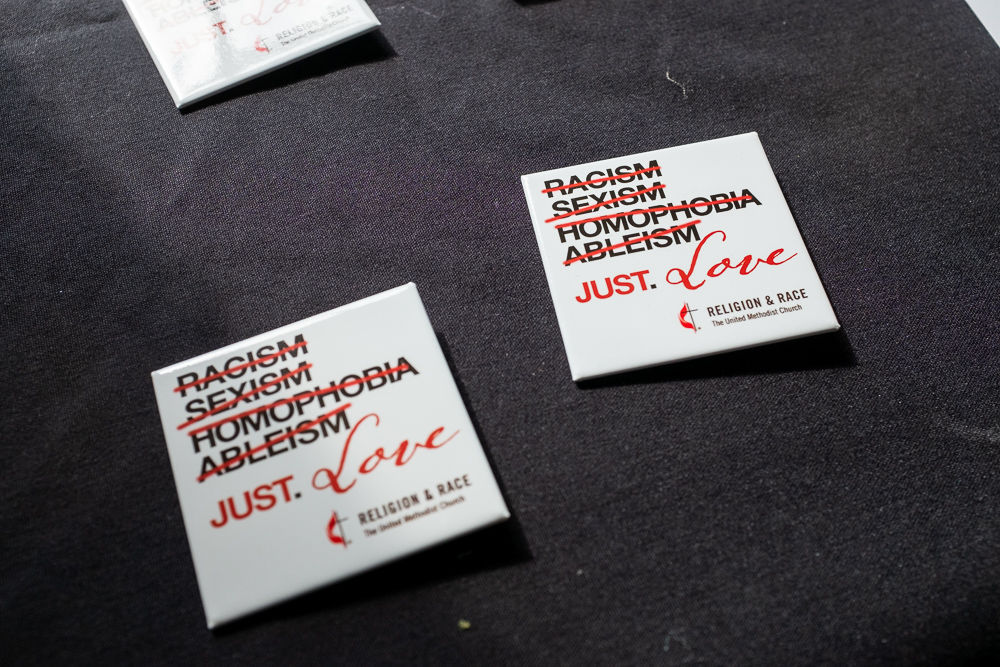 Buttons and other promotional and educational items were on display at Brentwood UMC's Faith Forum: Conversations on Race 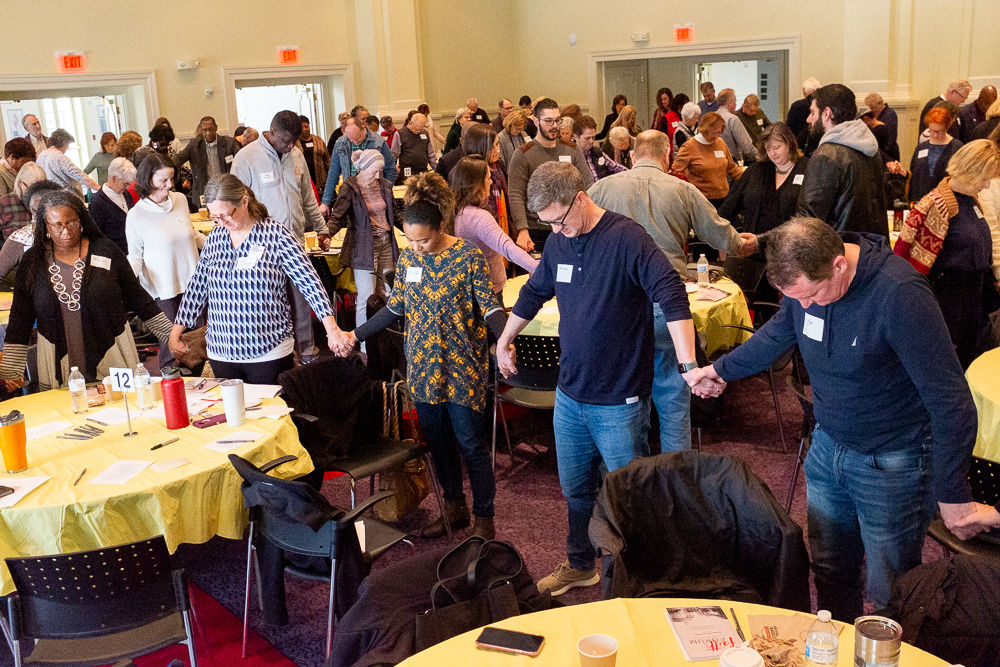 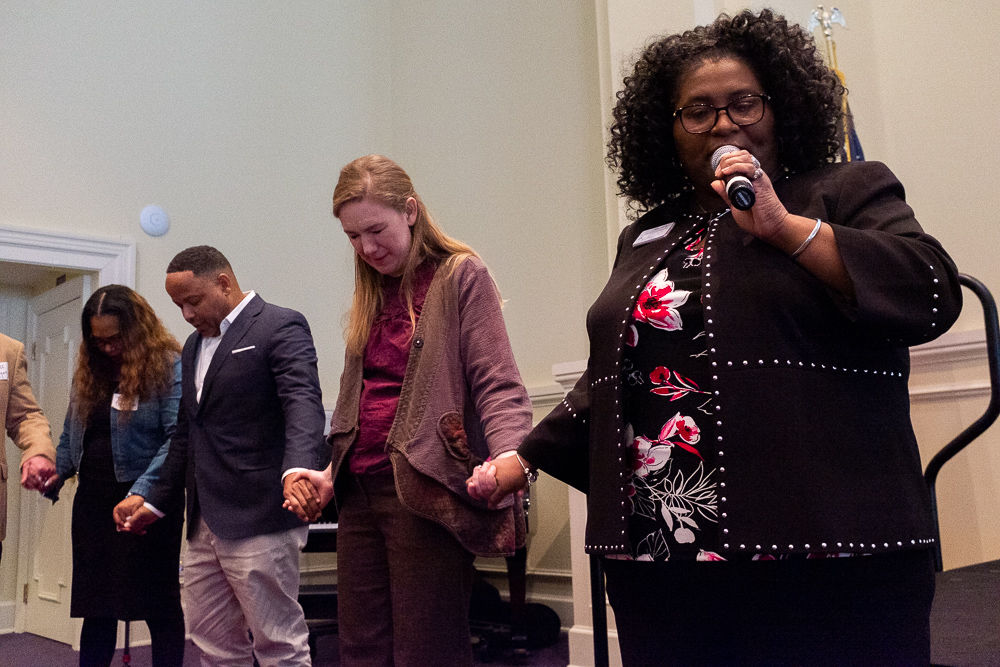 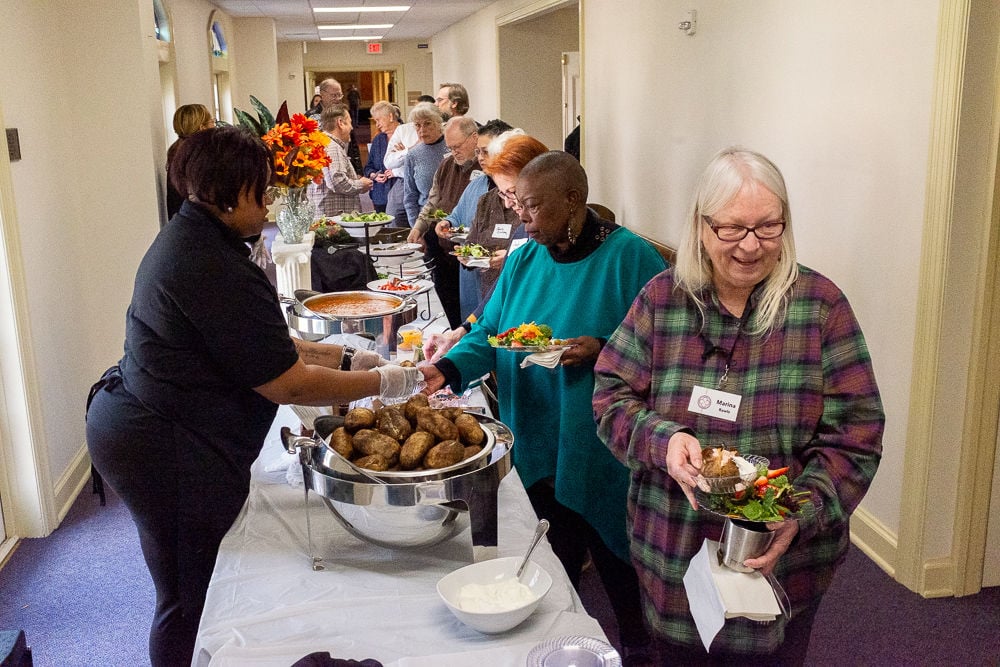 Buttons and other promotional and educational items were on display at Brentwood UMC's Faith Forum: Conversations on Race

More than 200 people gathered at Brentwood United Methodist Church on Saturday for the church’s Faith Forum: Conversations on Race, which aimed to have serious conversations on the role of faith in tackling racism in both the Middle Tennessee and the county as a whole.

Attendees of varying ages, genders and races represented an estimated one dozen congregations from across middle Tennessee and took part in serious, goal-oriented conversations.

The event was co-hosted by the TN UMC Commission on Race and Religion and the TN UMC Board of Church and Society and featured several speakers and panelists including Professor Emeritus of Vanderbilt Divinity School Dr. Doug Meeks, Senior pastor at McKendree UMC Rev. Stephen Handy, Williamson College Professor Anthony Hendricks, President of TN UMC Commission on Race and Religion Tabitha Mundy, Nashville activist and major organizer of the Davidson County Community Oversight Board Nick Cavin and Director of Transitional Housing at the Nashville Rescue Mission and community activist Tammy Bullock.

Dr. Meeks spoke first on “The History of Racism and the Church,” where he talked about the history of the churches activism and the need to bring these conversations outside of the walls of the church to political, economic and social circles where they can make an impact on the world, regardless of the challenges ahead. He used the metaphor of the table to bring people from all backgrounds and views together for the tough but necessary conversations.

“Tables are the center of all economies, of all life if you will. Think about it, the major decisions of life take place around tables,” Meeks said. “There’s the operating table, the calculating table, the negotiating table, the board director’s table, the seminar’s table and the kitchen table. So these are the questions that we have to ask: Which tables have you been sitting at and which tables will you sit at? If the church is going to have anything to do about racism in the Nashville region, I think we’re going to have to learn how to sit at some new tables.”

Meeks spoke on the need for the church to invest in the communities impacted by racism in order to take a stance against it, adding that racism is also an economic issue and a moral issue that is reflected in the American prison system that itself has continued as legal slavery while modern day slavery inside and outside the country also exists in various forms such as human trafficking.

“How can you help your congregation become a standing up community, a resurrection community?” Meeks asked.

Meeks also spoke about the church’s members being a people of “tears and dancing,” a people that have made it a mission to face the issues of the past and the contemporary in both good and bad times with faith and unity.

“The fact that are talking about this thing called racism today, we do only because we’ve been sitting at the Lord’s table. Because we sit at the Lord’s table we are people of tears and dancing,” Meeks said. “I don’t think we can tackle this thing called racism which is tearing apart our nation and threatening the peace of the world without tears and laughter and dancing.”

In between each session were table discussions with each table sitting about 10 people who all took part in intimate discussions of how racism has impact their lives. Theses discussions were led by a designated facilitators.

One of those facilitators was Carolyn Dandridge of Gordon Memorial UMC in Nashville who said that God’s purpose for humanity is love, something she said is in opposition to racism.

“It was important for me to be here today because I too came out of the Civil Rights Movement," Dandridge said. "My father was part of the Civil Rights Movement in Montgomery, Ala., that’s where he started and that’s where my life started. I want to see the church be the church that God wants us to be. I want us to be more loving. I want to tear down he racism, the sexism, all the ‘isms’ because that’s not about love. Our sole purpose here is to love one another not because of what you can give me or I can give you, it is because God told us to —That is our purpose, that is why we are here, to love each other, and yes, it’s going to be hard. It’s not going to be easy, and we’ll have to have some tears, but I’m waiting on the dancing. I know the dancing is coming. I’m waiting on the dancing.”

The panel discussion called “The Realities of Racism Today” featured Bullock, Cavin, Hendricks and Mundy with Gossett and King serving as moderators, and expanded on the ideas brought up by Meeks as well as speaking about the ways to move forward both in the Metro Nashville areas and on a larger scale.

Rev. Handy issued the final and powerful sermon of the day entitled “The Future of the Church” where he spoke about the need to reach across lines and bring those conversations to those who may not have had them before, the need to pursue social justice and the need to have intercultural and competent leaders in the church. Handy also spoke about the church investing in itself in order to re-imagine itself and pursue the greater good in the face of society’s barriers.

Brentwood UMC’s Rev. Gossett said that she and the church leadership were thrilled with the attendance and response to the larger scale conversations that began about three years ago and have focused on different topics that impact both the church and society as a whole.

“This is beautiful and powerful and I know that a lot of people are already doing this work, but a lot of times, especially white people, we can be behind on this conversation and so it’s just really beautiful that people would take the time on a Saturday morning and have this conversation,” Gossett said.