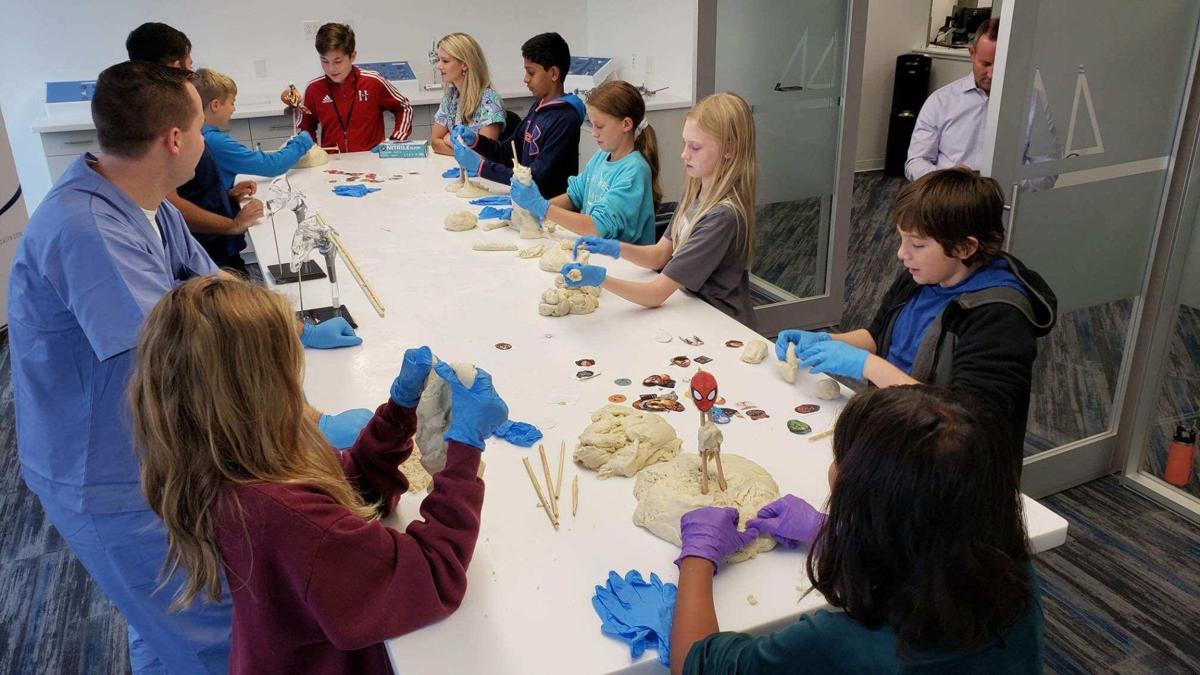 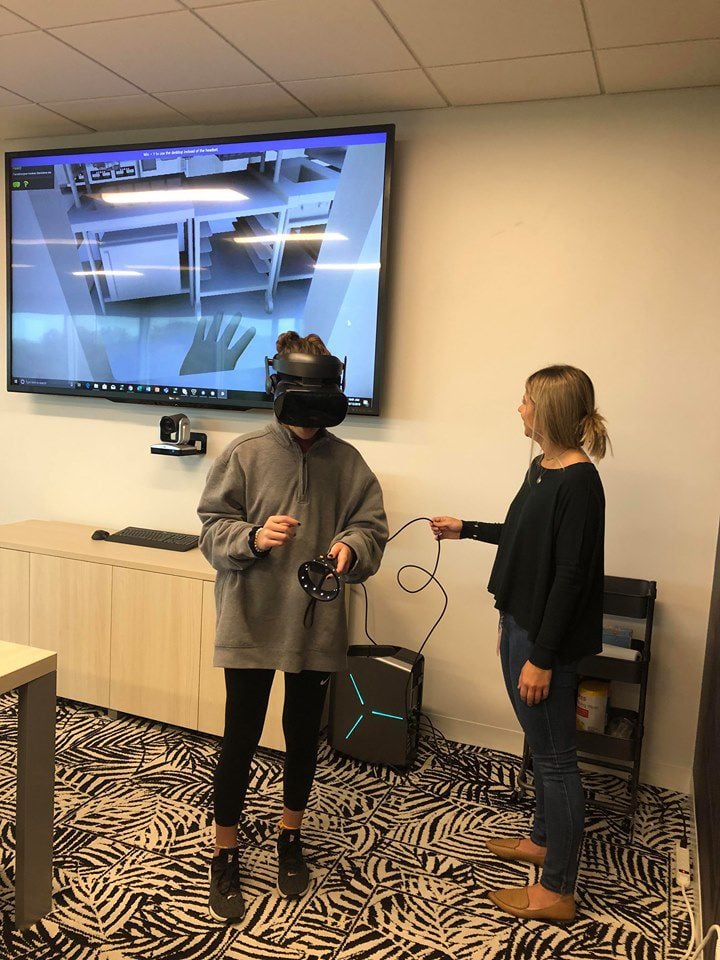 A student uses a virtual reality headset at CKE Holdings during STEAM day. 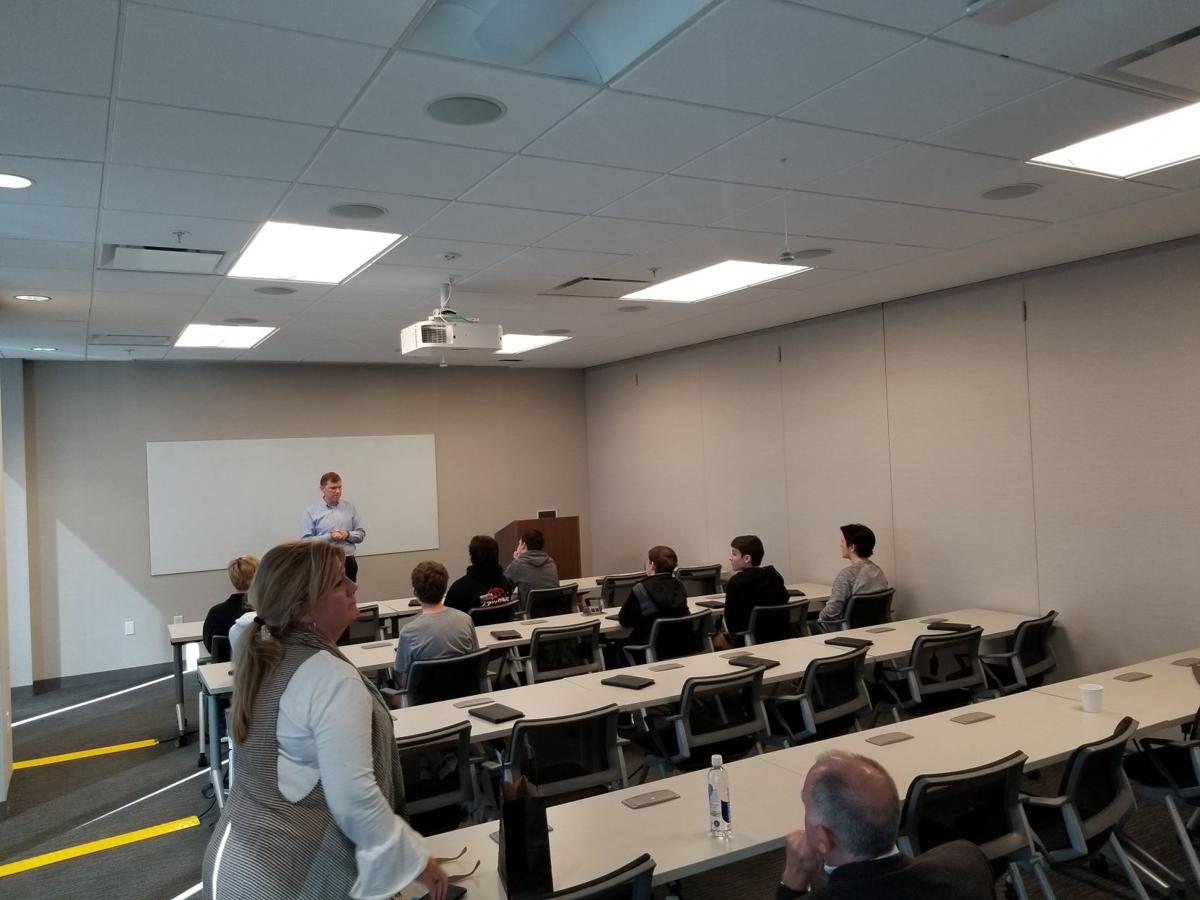 A tech worker at LBMC makes the case for a career in tech in front of a group of middle schoolers.

UPDATE: This story was corrected on November 6 to show that a group of high schoolers visited LBMC.

At the front of a small conference room in Brentwood, a tech worker focusing on data analytics for LBMC tried to convince a group of high schoolers to consider a career in technology.

“You're probably familiar with coding. Who's heard of C coding? Anybody?” he asked. “Does anybody know how to C program?”

None of the high schoolers raised their hand. A teacher reminds them they learned about the programming language Python last semester. A description of the attributes that make Python an excellent data science language doesn’t seem to interest them either.

Despite the lack of enthusiasm in that room, economic development officials and tech industry leaders in Middle Tennessee are looking to high schoolers — or even middle and elementary schoolers — to eventually end a local labor shortage in the tech industry.

Over the summer, a tech industry advocacy group calculated that the U.S. tech industry had a 1.3% unemployment rate. That makes it hard for tech companies to find new employees, especially in Williamson County where total unemployment is at 2.3%.

To address the labor shortage, economic development organizations in Nashville and Williamson County — along with the local school systems — are exposing local students to the tech industry, hoping they will eventually work for local companies.

Hoff started a program called Traveling Tech Days that brings Middle Tennessee students to the offices local tech companies so they can see what it’s really like to work in the industry.

In October, she organized trips to more than a dozen local tech companies— including LBMC, Franklin-based Schneider Electric and Brentwood-based HPA — for 85 Williamson County students and 90 Davidson County students.

“This is an opportunity to take students, bring them to different places, let them see how different it is to work at LBMC versus maybe a small company where there's a dozen people and a ping pong table,” she said.

Tractor Supply hosted @WCSedu students so they could learn more about careers in technology. Thanks @nashtechcouncil @wcsCCTE for making a great event and helping us support long term workforce development #TravelingTechDay pic.twitter.com/ftxaG6Utxj

Neither the technology council nor Williamson County Schools or Williamson Inc. have data showing how many local students eventually work in tech locally. But Drew Hendrickson, who works in information security at LBMC, said he often hires workers who follow that path.

“When we go to UT Knoxville or Alabama or UT Chattanooga or wherever we recruit, we are seeing lots of kids who are originally from this area,” he said. “Their parents still live here. They went off to college and now they're looking to come back to this area.”

While many middle school students won’t join the workforce for a decade, Anna Lisa Roberts, a Williamson County Schools employee tasked with getting private industry to engage with students, called these kinds of programs are a long term investment.

“They are the future of your workforce,” she said. “"Engaging with them now ... is important so they'll know what options are available to them so they will stay in Williamson County to live work and play.”

Roberts worked with Williamson Inc. in October to organize visits for 140 Williamson County middle school students to local companies, such as the medical device manufacturer Medacta, the Tennessee Equine Hospital and Hardee’s parent company CKE restaurants. The event was part of a regional STEAM festival organized by the Discovery Center in Murfreesboro.

STEAM stands for science, technology, art and math. The goal was to show students how these subjects are applied in the real world.

Economic development officials at Williamson Inc. see the public schools system as an important way to maintain a steady supply of talented workers for local companies.

“I think a resource we have, that a lot of other communities don't have, is the strength of our high schools,” Williamson Inc.’s director of talent Development Nick Biniker said. “We think the earlier we can get that exposure the better chance those students will become interested in careers that are available locally.”

The tech council’s Traveling Tech Days specifically focus on exposing students to careers in technology, but the College Career and Technical Education department at Williamson County Schools aims to prepare students for a range of careers after school. That could include college and a professional career or a trade school and a technical career.

Williamson County Schools and Franklin Special School District will host a career fair for eighth graders on Thursday at the Ag Expo Park in Franklin, where they can talk to representatives from many different local companies in a single day.

Roberts said the district is even looking at expanding this type of programming for elementary schoolers because students are starting to make decisions about their future earlier.

“We're not asking them to pick what they want to be in 10 years, but we are saying to companies, 'be a part of it. Be a part of the conversation,'” she said. “Show students what you have to offer because they're making decisions now about what they're going to do when they grow up, or at least considering options.”

Students considering a career in technology in Middle Tennessee will likely have a lot of options.

According to a new report from MTSU, the number of tech jobs in Middle Tennessee grew by 34% between 2013 and 2018, far outpacing overall job growth. During 2018, there were on average 4,599 new tech job postings each month.

However, Hoff said today’s students probably won’t be applying for the same kinds of tech jobs created in 2019. By the time they enter the workforce companies will be looking for an entirely new set of skills.

“That's part of the conversation with students about being lifelong learners,” she said. “People that are interested in going into tech can't think they're going to learn a single skill and be able to use that same sill forever. I think that's true of almost all jobs now.”