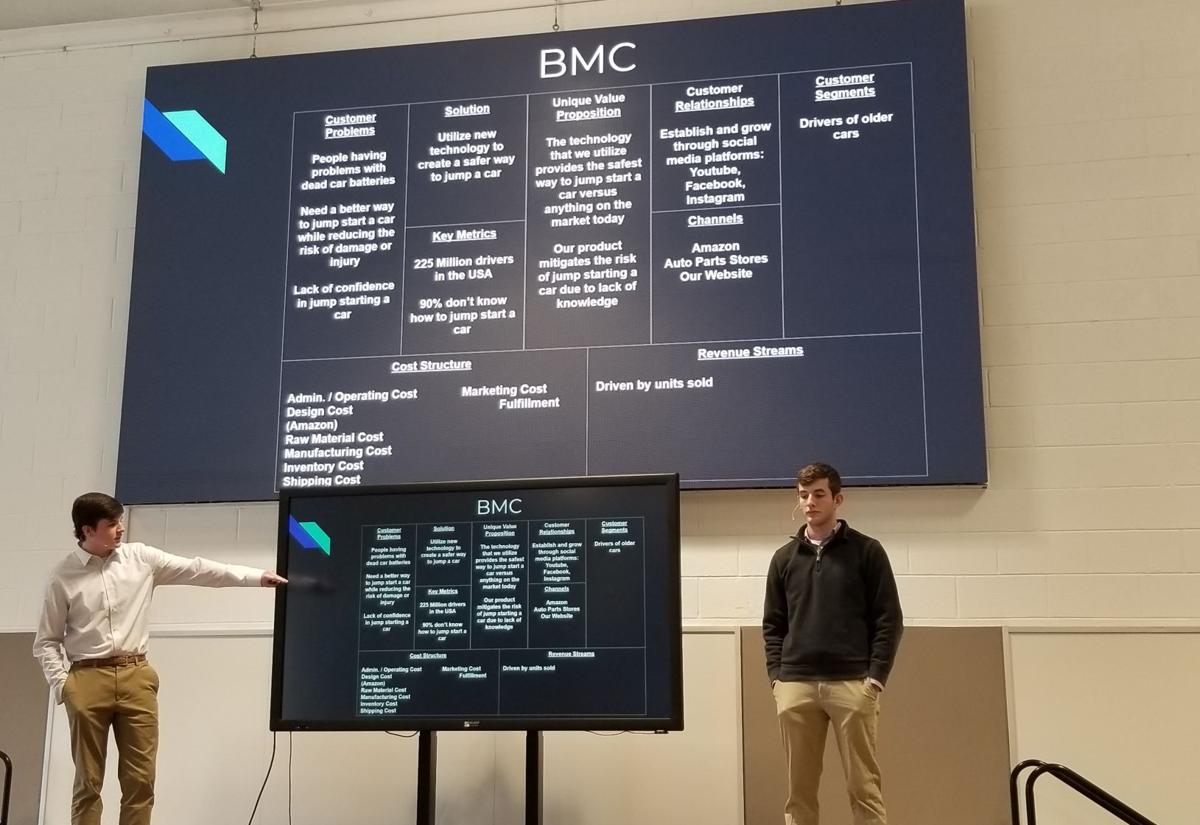 Matthew Martin and Barret Lamb pitch their idea for a set of foolproof jumper cables. 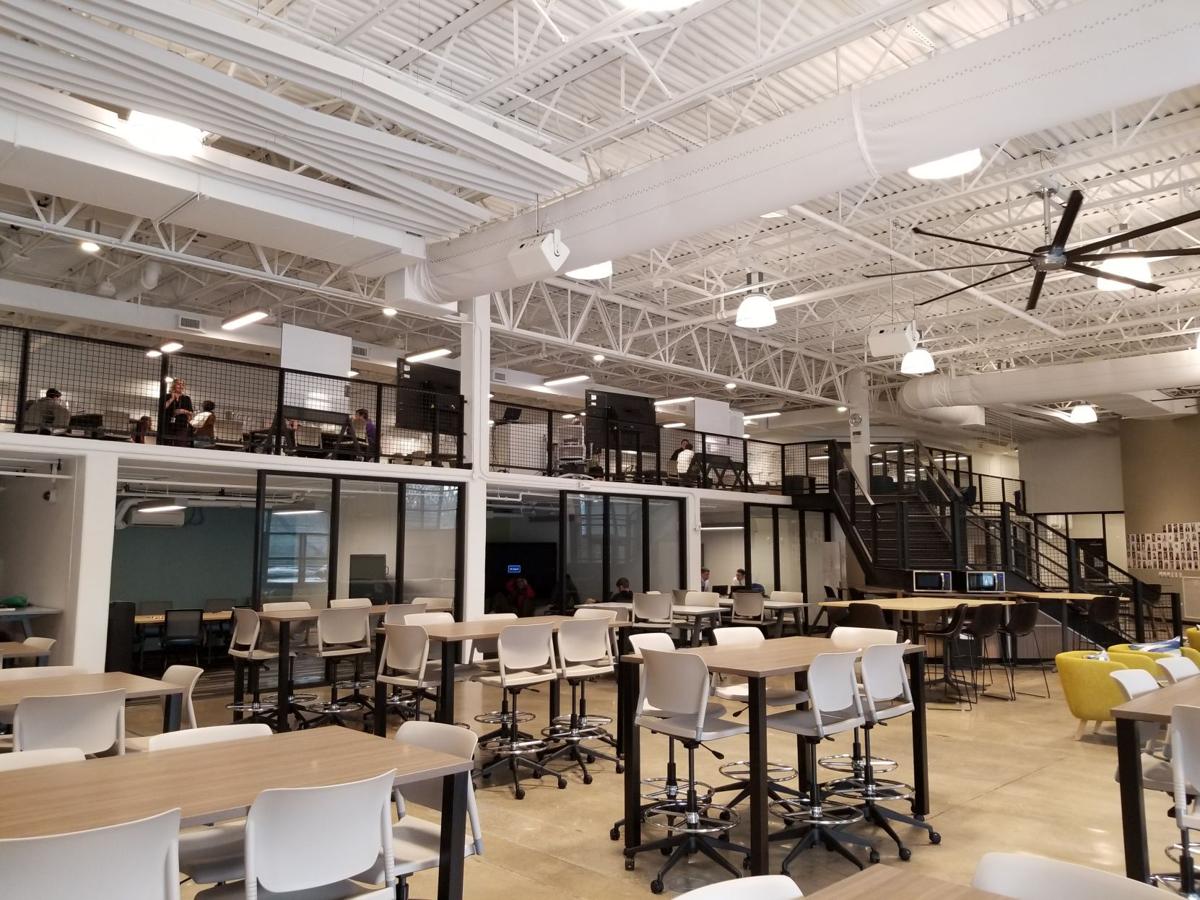 The Entrepreneurship and Innovation Center looks more like a professional co-working space than a high school.

After working on their business idea for months Matthew Martin and Barrett Lamb stepped up on to a small stage, ready to make their pitch to a panel of judges.

Skinny, hands-free microphones — the kind you might see at a TED talk — poked out in front of their faces. They started running through their business plan for a set of foolproof jumper cables.

“It’s a design we have that you can’t mix up. Positive won’t go on negative and vice versa,” Lamb said. “You don’t even have to know how to jump start the car. All you need to do is find the battery, plug it in and you’re done.”

The slides were slick, the spreadsheets were numerous and the entrepreneurs were still in high school.

Lamb and Martin are part of the first cohort of founders at Williamson County Schools’ Entrepreneurship and Innovation Center in Franklin.

The center, which launched at the beginning of this school year, is designed to give Williamson County high school students the chance to start their own businesses.

For about 45 minutes every day, students from all over the county leave their regular high school and work on starting a business at the innovation center, located in a recently renovated building next to Franklin High School.

Franklin High School senior Angelina Ivanova said having a separate building, which looks more like a hip co-working space than a school, makes it easier for students to see themselves as business owners.

“When you leave your school and come here you enter the business world,” she said. “We're no longer high school students. We're entrepreneurs.”

About 130 students — with at least one from each high school — in the county are working on business ideas this year. They get class credit for participating, but Independence High School junior Sara Solan said she signed up because she wanted the chance to make something.

“It's just so much more creative here. So much more creative than any other high school thing,” she said. “We get the opportunity to build our business up from the ground. It's not fake. It's not an assignment. We don't have tests on it. You're actually doing something. You feel like it's not school. You feel like it's real world because it is real world.”

During the last two weeks of January, students pitched ideas for 35 new companies to business leaders from Middle Tennessee. Those judges awarded seed money to the most promising ideas and offered critiques of the students’ plans.

During this round students could ask the judges for up to $500 in seed money. The Catalyst Network, a nonprofit created to support the innovation center, raised the money through private donations.

The student entrepreneurs will use the seed money to continue developing their business ideas, and then come back at the end of the year for another pitch session.

Judges awarded Lamb and Martin $450 to design a prototype and set up an LLC. Justice and Solan received $375 to create more jackets.

Williamson Inc. Director of Talent Development Nick Biniker, who served as a judge, said the pitches impressed him.

He said he was especially impressed that so many of the ideas had a social service component. One group of entrepreneurs pitched an idea for a bakery that would employ people with disabilities, another group presented a plan to provide needed supplies to animal shelters.

“I was just impressed by the thoughtfulness of everything,” he said. “The very first pitch that came out Monday (the one that would employ people with disabilities) came out swinging. All the judges were kind of stumped. This is a fantastic business idea.”

Kari Miller, the entrepreneurship center’s director, said the scale of business ideas spanned from a group selling candles at a local farmers market to a novel device that would allow users to floss their teeth in seconds.

The group selling candles will be at the Franklin farmers market this year. Ideas like the dental device or the foolproof jumper cables could take years to fully develop. However, Miller said even if students don’t turn their ideas into long-term businesses they are still learning real world skills.

“One of the things we're doing here is training your future employees on how to work with other people on your staff, how to communicate responsibly, how to send an email that's grammatically correct,” she said. “I'm excited that a couple of them want to be small business owners ... ultimately what I'm more excited about is all the skills they've learned that they can apply.”

Justice said she would be somewhat nervous about relying solely on her own business for an income. Franklin High School junior Sam Phillips said he’s always wanted to start his own business.

“I haven't seen anything like this offered before. You don't (often) get the chance to pitch for free money and actually turn it into something,” he said. “As soon as I saw it I needed to apply.”

Phillips, along with Ivanova and Independence High School junior Aidan Hardison, are working on an app called Kiddovation that would allow parents to electronically reward their kids for doing chores.

Miller said Williamson County Schools hopes to expand the program next year, potentially doubling the number of students. The district is making some changes to the building that would create space for a new classroom, and is considering adding another teacher to the program.

Applications for the entrepreneurship program are open now. Students interested in starting a business can apply through the Williamson County Schools website.

The innovation center is also looking for more business leaders to serve as mentors or guest instructors. Business that want to support the center can find more information on the Catalyst Network’s website.