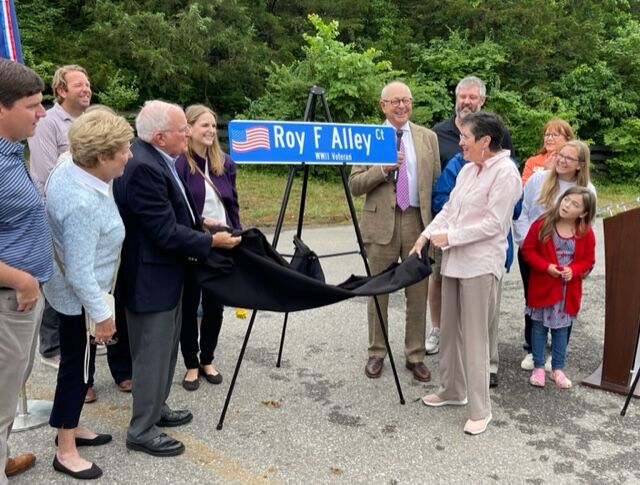 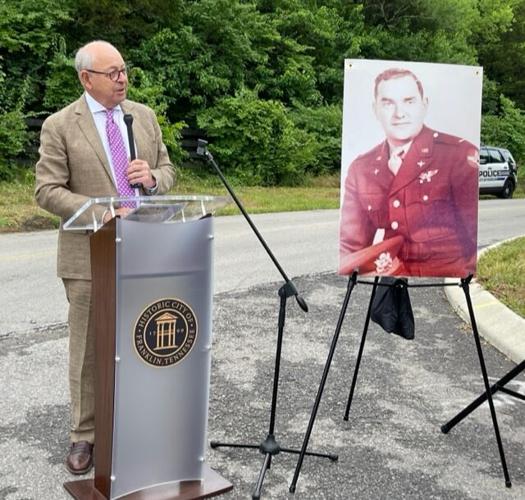 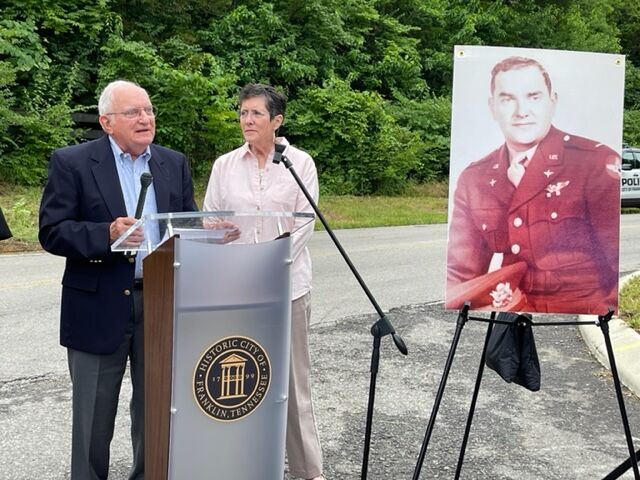 Descendants and family of a Franklin war hero joined with others Monday morning for an unveiling ceremony hosted by the city of Franklin as part of its Veterans Street Naming project that got underway four years ago.

To kick off the ongoing program, the city has named its first local street after a Franklin veteran who served during World War II before being shot down and killed in April 1945. The street at Carlisle Lane and Old Charlotte Pike has been named after Roy F. Alley, who was born and raised in Franklin and joined the Army Forces after attending David Lipscomb College and graduating from Vanderbilt University.

Among family members attending the sign unveiling were Alley’s son, Roy Alley Jr., and niece Ann Little, a former city of Franklin alderman. Neither knew their father or uncle.

“We’re all appreciative of this recognition today,” Alley said. “However, we must remember that as important as Roy Alley was to us personally, he was one of many similar stories of the Greatest Generation. Not all will be honored with street names and VFW Posts. We are so very grateful for that recognition, and we hope the city of Franklin will continue that [tradition].”

Alley was a bombardier, a crew member of a bomber aircraft responsible for the targeting of aerial bombs. He was assigned to a group on Palawan Island in the Philippines and flew pre-invasion missions over Japanese-occupied islands in the South Pacific.  Alley, a Second Lieutenant, died April 20, 1945, when his plane was shot down. The VFW Post 4893 in Franklin is named after him as well.

The Veterans Street Naming project was launched in 2018 to name a neighborhood street after a veteran who has died in combat. The program offers a street with a street sign in a new residential subdivision dedicated in a veteran’s name.

The program was introduced to the city by local citizen Steve Arends, who came from the city of Chula Vista, Calif., which has a similar program. Arends contacted Burger, his alderman, who brought it to the attention of city officials.

Families that are interested can submit the information through the city of Franklin website. Applicants can fill out the form or submit their name and a short bio with a photo to [email protected]. All names submitted will be reviewed for compliance against the addressing guidelines in the addressing manual.