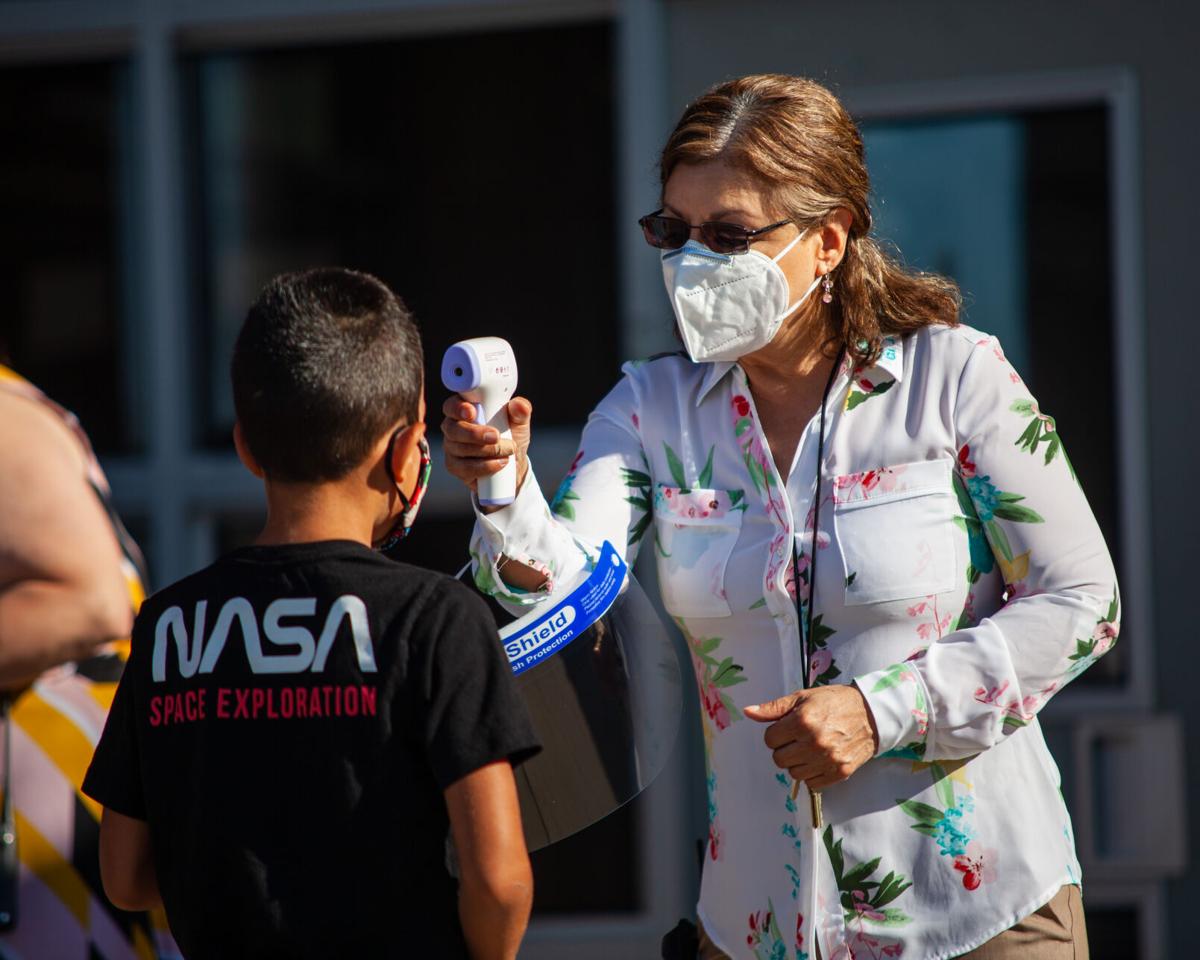 Temperature checks, such as this one at Nolensville Elementary School, were the order of the day as some students returned to classrooms Friday morning. 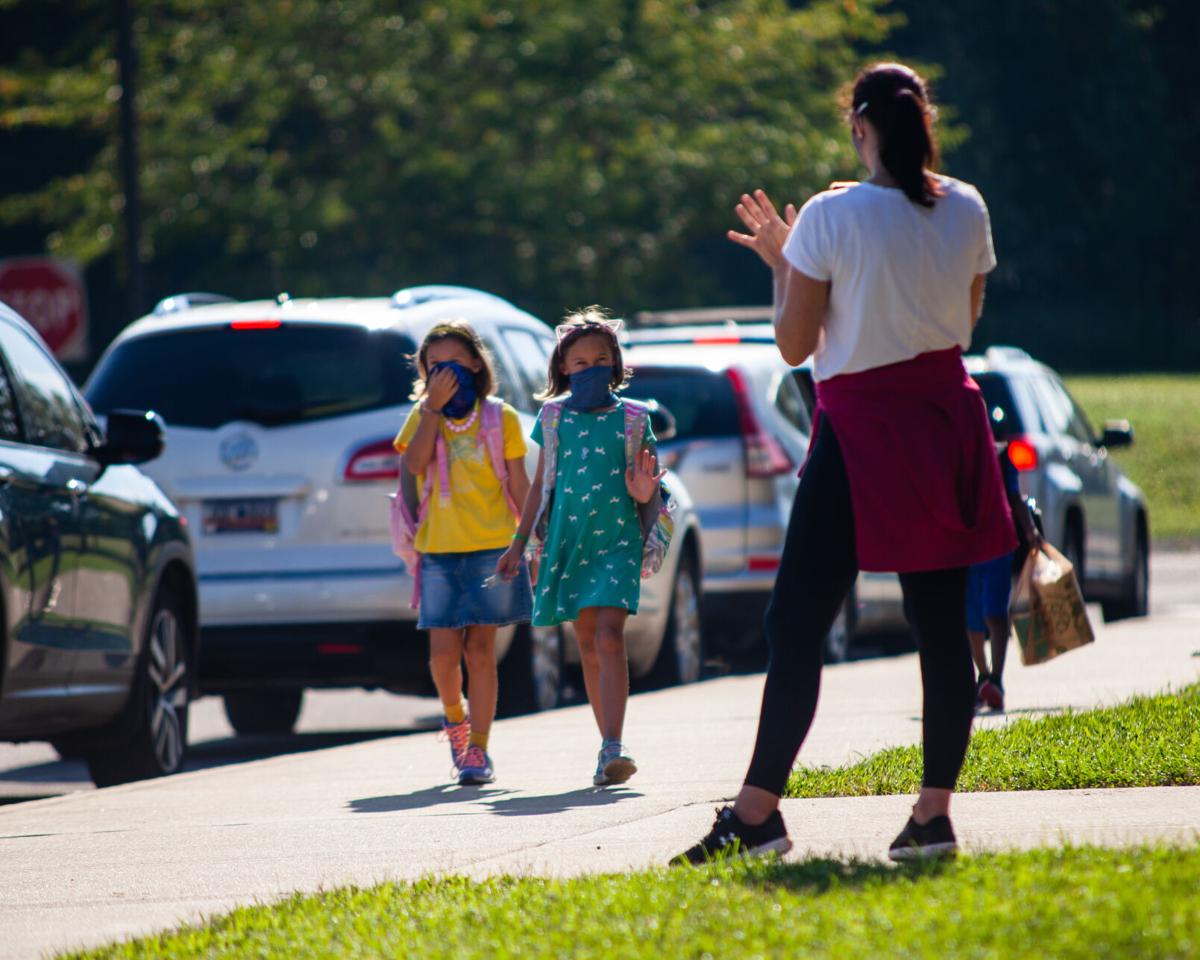 Students greeted by a teacher at Nolensville Elementary School 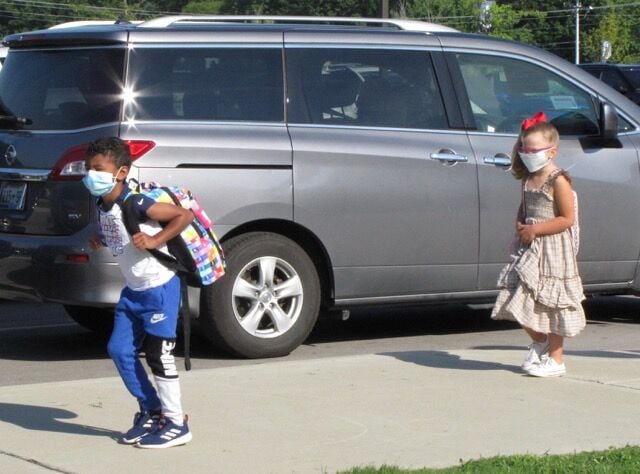 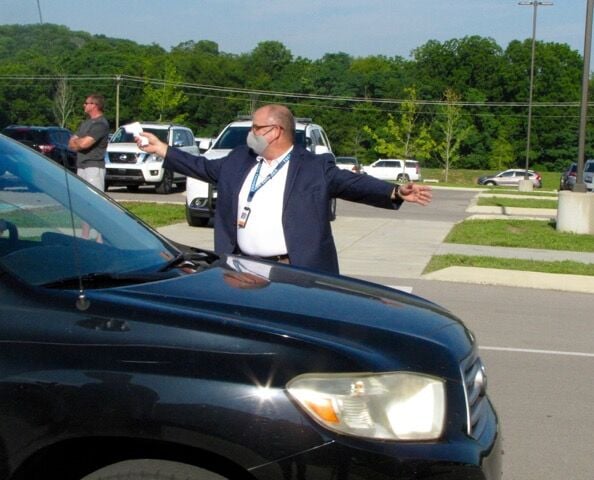 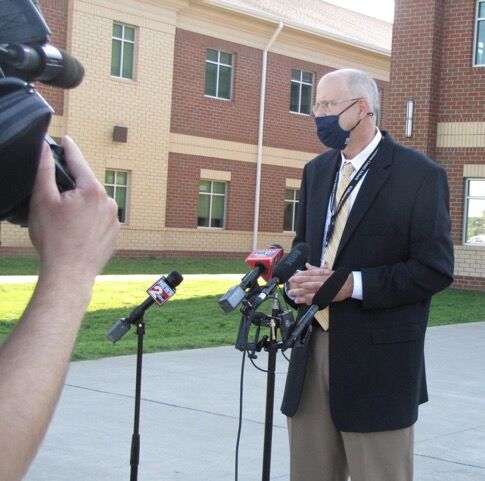 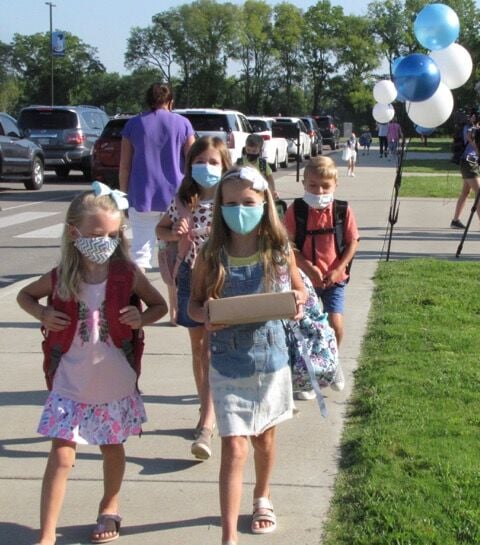 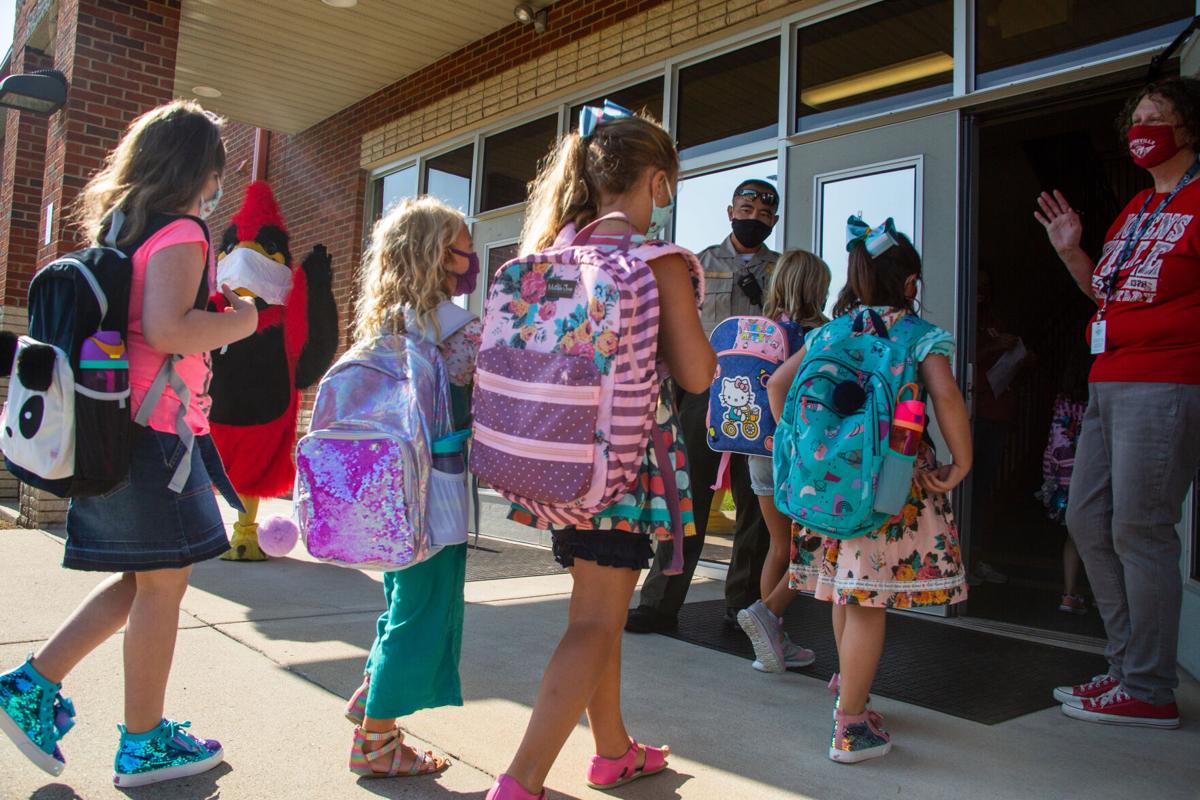 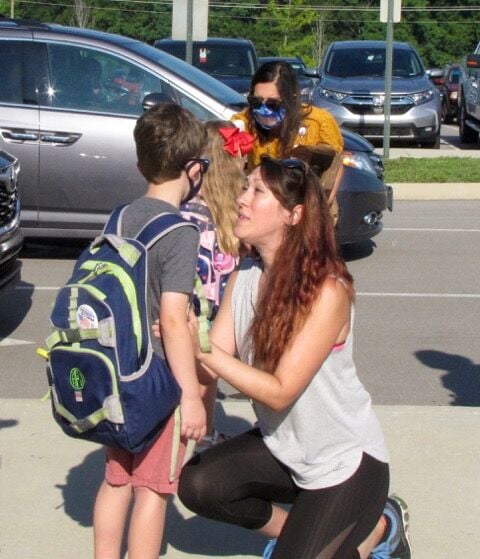 A goodbye before school is scheduled to start 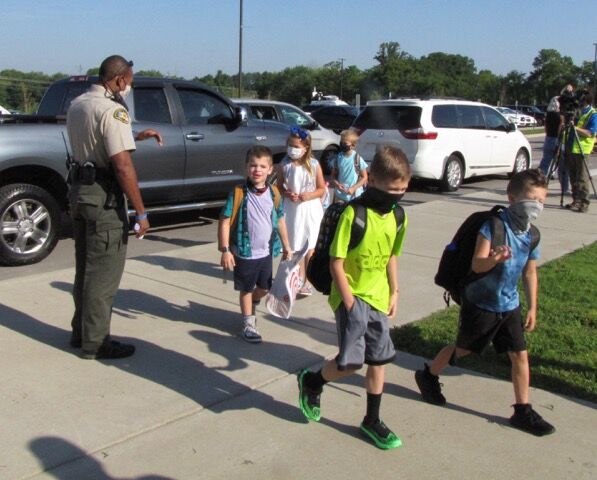 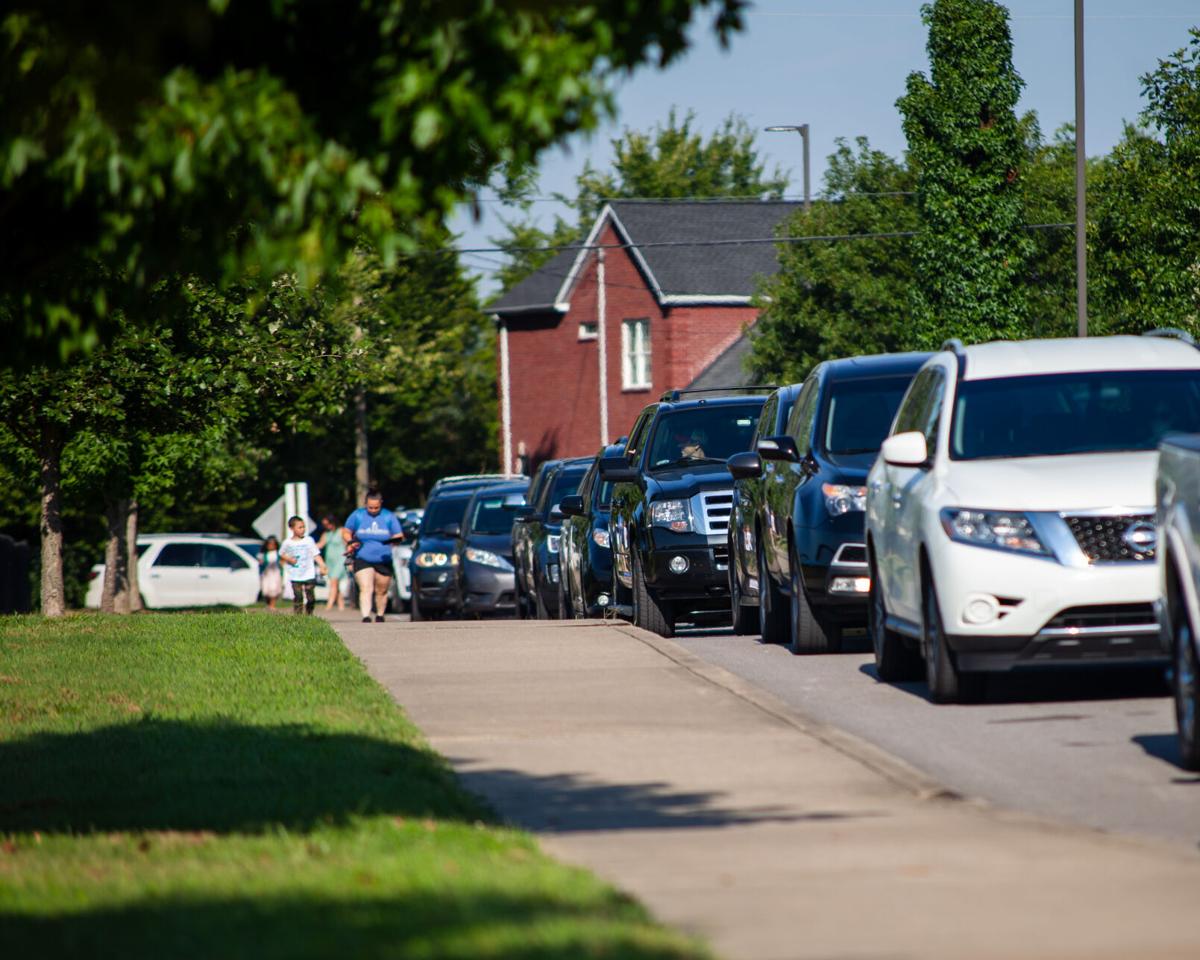 The drop-off line at Nolensville Elementary was long Friday morning. 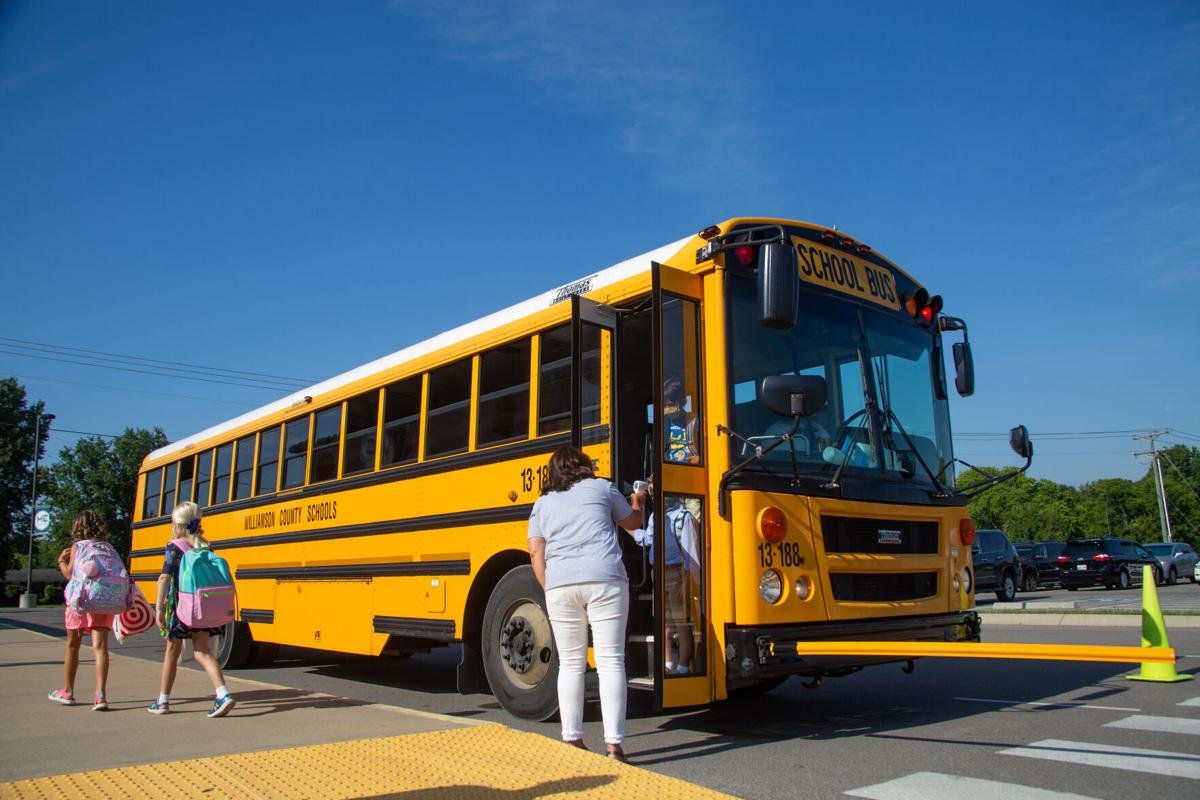 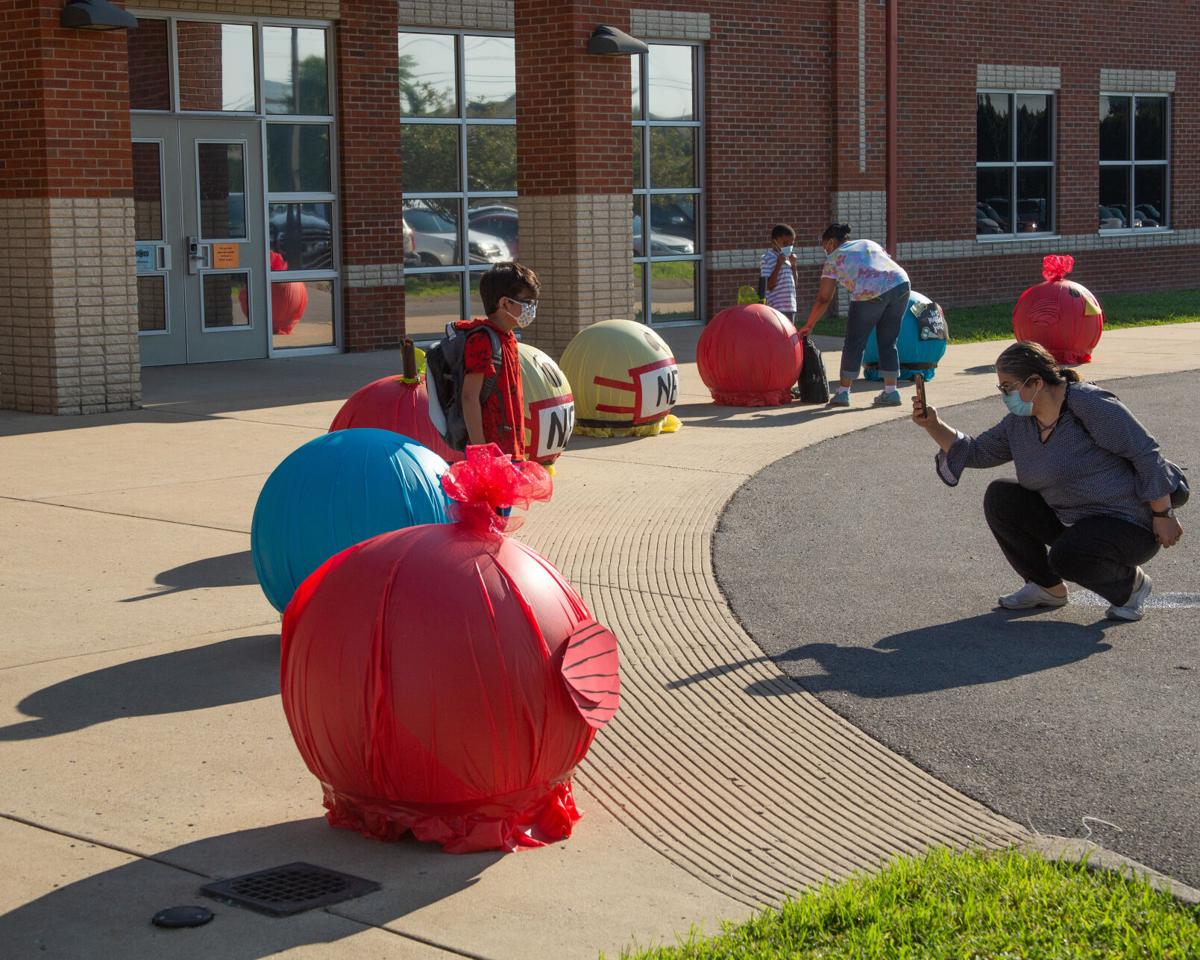 Temperature checks, such as this one at Nolensville Elementary School, were the order of the day as some students returned to classrooms Friday morning.

Students greeted by a teacher at Nolensville Elementary School

A goodbye before school is scheduled to start

The drop-off line at Nolensville Elementary was long Friday morning.

In his transition from kindergarten to first grade at Thompson’s Station Elementary School, Charles Grogan’s son had to make a few adjustments.

For one, he had to wake up much earlier than what he had become accustomed to since school attendance had stopped in early March because of the impact from the coronavirus outbreak.

“Just getting him in the swing of going to school has been tough because they’ve been out for five months,” Grogan said after dropping his son off Friday morning for the first half-day of Williamson County Schools’ 2020-21 school year.

And then, of course, there was one more adjustment all first- and second-graders are having to make as they re-enter classrooms on a physical basis — the wearing of masks.

“It’s a little more intimidating for him, being just 6 years old,” Grogan said. “It’s like, ‘Dad, what do I do, how do I wear this, why am I wearing this?’ He does it because as parents we tell him to, but I guess it’s going to be the new norm. We need to get them used to this because it’s what we do now.”

Thompson’s Station was one of 26 WCS elementary schools that opened their doors to students in first and second grades, with pre-K and kindergarten students returning Aug. 17.

One school, Chapman’s Retreat Elementary, will be delayed in opening because of a front-office employee having tested positive for COVID-19.

High schools and middle schools, as well as students in third through fifth grades, also began classes Friday morning, but in a remote setting that will last for at least two weeks.

“I’d like to see everyone enjoy the day, enjoy school starting back,” WCS Superintendent Jason Golden said at a news conference held at Thompson’s Station Elementary. “It’s been a while, and that interaction — whether it’s remote or person-to-person — is really important.

“On the health side, we’re emphasizing masks, masks, masks, … so I do want to encourage everyone to follow county Mayor Rogers Anderson’s directive to wear masks. It’s really important from everything we’ve learned, that the spread in the community has an impact on schools and vice versa.”

In addition to face coverings for those attending schools in-person, another new adjustment for students and teachers to make is the use of Chromebooks that have been distributed to all but a few students by now. Using the devices will be a learning experience for both students and teachers, according to Golden.

On the other side of the county, meanwhile, parents began dropping off students around 8:15 a.m. at Nolensville Elementary School.

Many stopped to take photos of their children outside of the school's concrete bollards, which were wrapped in a variety of colored paper to resemble the school mascot, the Cardinals, in red, or yellow smiley faces outfitted with PPE masks as well as encouraging "Welcome Back" messages.

School staff and administration took the temperatures of students before they entered the building using contactless forehead thermometers as well as asking each student how they were feeling.

Students were wearing a variety of masks of varying colors and styles, with many matching their carefully considered first-day-of-school outfits.

Parents were asked to say goodbye at the school's entrance or as they dropped them off in a long line of cars that stretched around either side of the building to the back of the building where a Williamson County Sheriff's Office school resource officer and school mascot Russell the Cardinal, both of whom were masked, helped staff greet students.

Matt Masters contributed to this story.