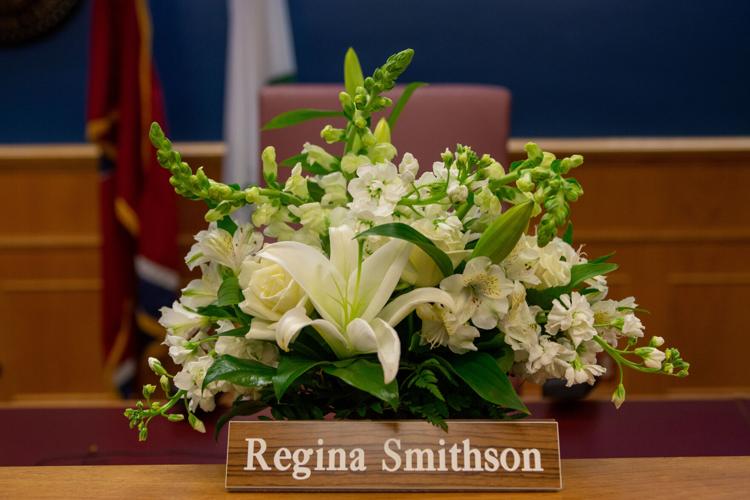 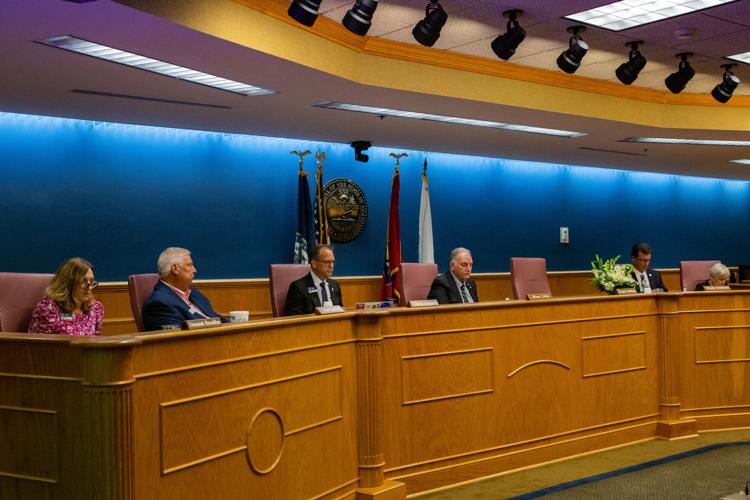 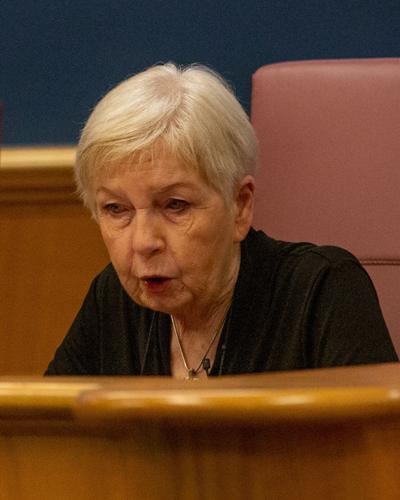 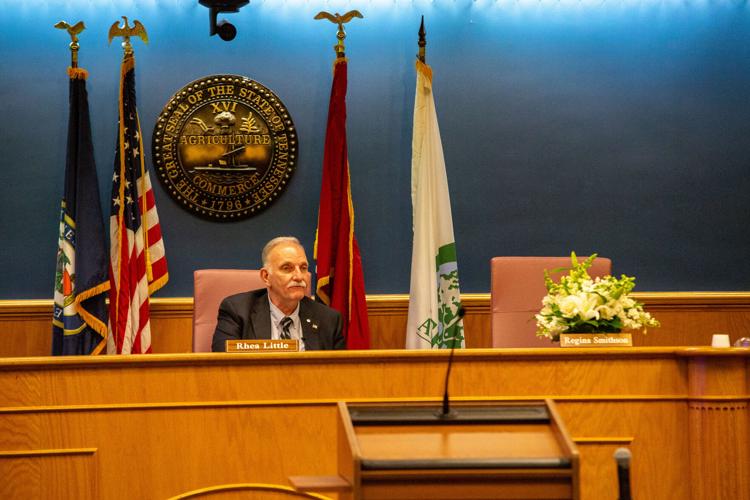 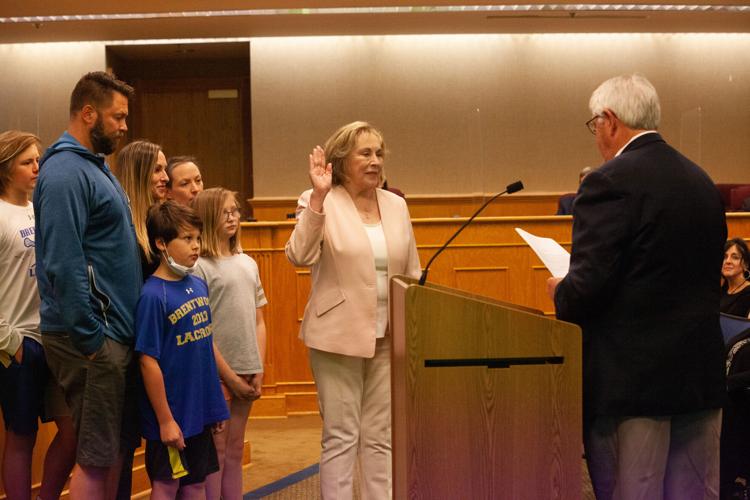 File photo of late Brentwood Commissioner Regina Smithson as she took the oath of office on May 10, 2021.

An empty seat was left in the commission chambers, which was adorned with a bouquet of flowers in memory of one of Brentwood's pillars.

Each commissioner spoke about their friend and colleague's impact on and legacy within the Brentwood community, some fighting back tears — calling her, among other things, a "true gift to Brentwood."

Smithson was a longtime member on the Board of Commissioners, serving for over 30 years including two terms as mayor and vice-mayor.

”It’s with a heavy and grieving heart that we announce the passing of our colleague, friend and fellow Commissioner Regina Smithson,” Mayor Rhea Little said. “We ask for your prayers for her family, the staff and commissioners of the City of Brentwood, and her multitude of friends as we all go through a time of mourning for the loss of such a great public servant and a lover of the citizens and city of Brentwood.

“Regina was a wonderful lady who was a pioneer in bringing about so many great foundations and policies that make Brentwood the greatest place to live. She always sought to keep Brentwood fiscally strong with great public safety, fantastic parks, a world class library, a world class police headquarters and all the thousands of other things that she played a part in making Brentwood so wonderful,” Little continued.

“I'd like to talk about my friend Regina Smithson,” Commissioner Anne Dunn said. “A lot of people will talk about her as a city commissioner, and she deserves all those accolades because she worked hard and she did a good job, and she stood up for what she believed in. But I want to tell you a little bit about the Regina I knew and just love as a friend.

“We first met when there was a vacancy on the commission because a commissioner had moved out of state,” Dunn continued. “There were six people being considered for the appointment — Regina and I were both up for it. She got it. I didn't — But that never stood in the way of our friendship. I liked her — She liked me. We fought sometimes, but most of the time we bonded over our children and our shared values, and over the years, the friendship of her and John and their family has meant so much to me and my family.

“She was authentic,” Dunn said. “What you saw is what she was, she didn't have airs or put on any pretenses, and I will miss her from this day forth.”

"The impact Regina had on this community will be felt for generations to come,” Commissioner Mark Gorman said. “She and I first worked together when I was put on the planning commission, gosh, I don't know, 16, 17 years ago, and she was a big help. She was definitely a fighter for sure, and she will be missed.”

"My prayers to go to the Smithson family and for what they go through during these hard times, but it will get better and hopefully they have a lot of good memories that she has, especially as you ride around Brentwood," Commissioner Ken Travis said. "My goodness, her footprint and fingerprints are on everything."

“Commissioner Dunn, you knew her best, and my heart goes to you too,” Commissioner Susannah Macmillan said. “Commissioner Smithson was a remarkable woman and a trailblazer, and she spent countless hours dedicated to our city, and we are all the beneficiaries of that legacy.”

“She had an incredible combination of head and heart, and it’s a tremendous loss of community,” Vice Mayor Nelson Andrews said. “She will be terribly missed by family and I think by many more, so I do hope for comfort for all of them, and I hope everyone takes the time to remember just the depth and the breadth of her contributions, because it really sets a great example of what a community leader really means.”

City Manager Kirk Bednar also spoke about Smithson’s impact on the city, citing her support for the city staff.

“She, like all of you, was a great advocate for city employees over the 30-plus years that she was on this commission and her influence on that, and so it's a big loss for us as employees as an organization,” Bednar said.

”Personally, her and Commissioner Dunn are the two commissioners that have been on this commission from day one of my 22 years here, so obviously I have a lot of personal history with the commissioner Smithson, so again, just on behalf of all the city employees that have served with her and their time here, we just offer our condolences to the family,” Bednar said, adding that a basket with condolences from community members will be on the first floor of city hall for those who wish to pay their respects with cards or notes for Smithson’s family.

Funeral arrangements have not been made public at this time.