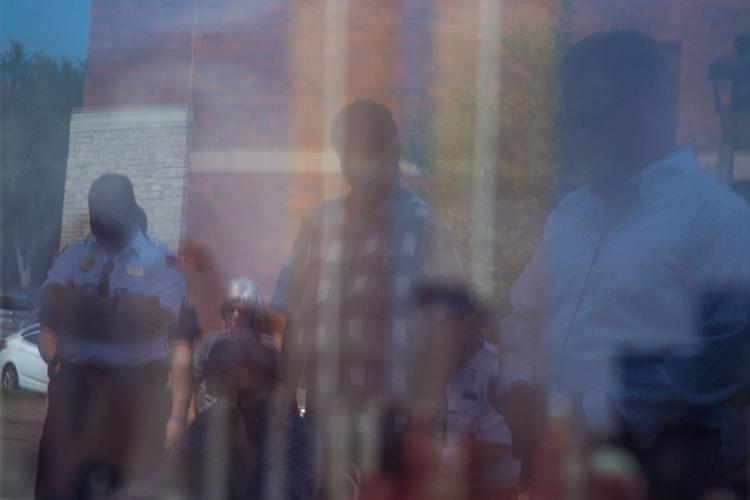 First responders and community members are reflected in a framed photo of the Twin Towers during Brentwood's 19th anniversary memorial of the 9/11 attacks. 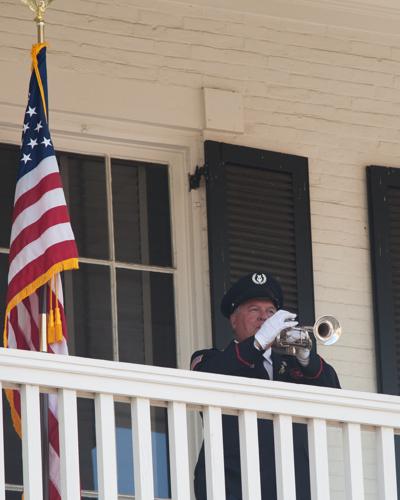 Frank Fenton with Bugles Across America performed “Taps” on the second floor balcony of the Mooreland House at Brentwood's 19th anniversary memorial of the 9/11 attacks. 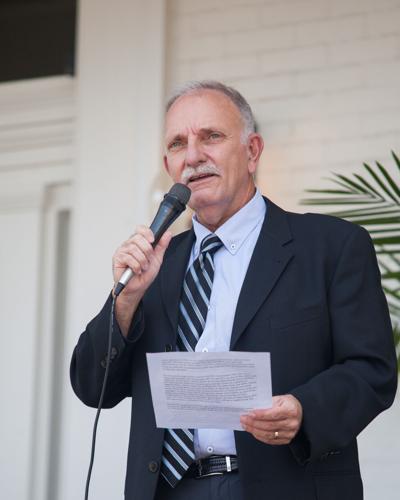 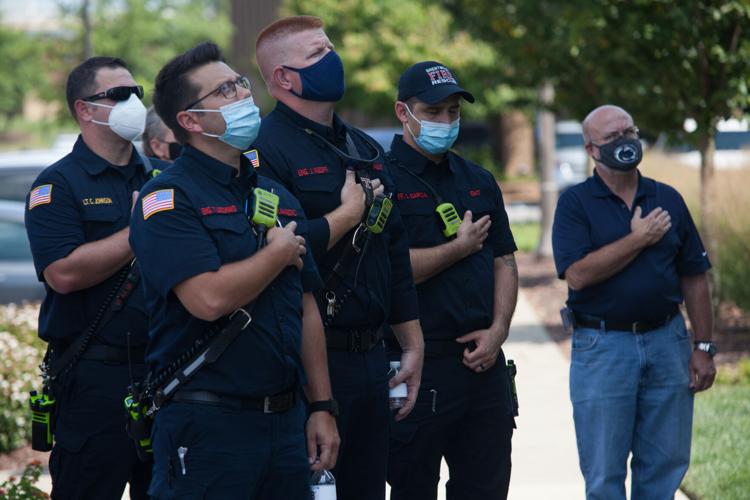 First responders and community salute the flag during the national anthem at Brentwood's 19th anniversary memorial of the 9/11 attacks. 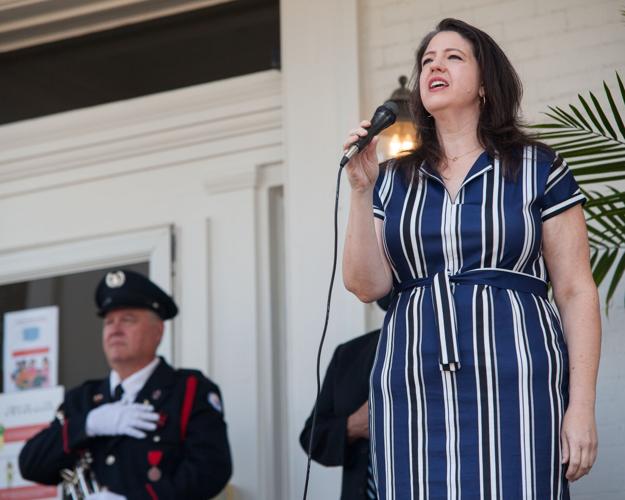 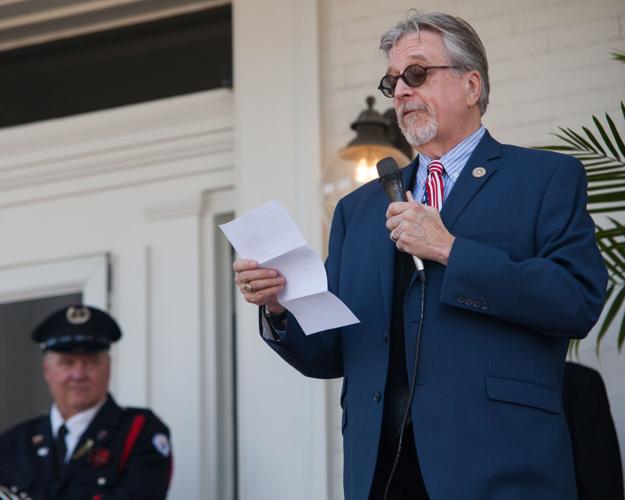 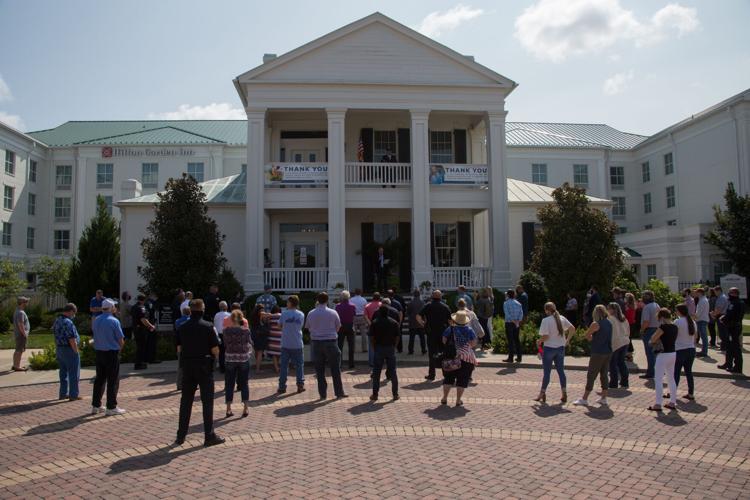 First responders and community members gathered in front of the Mooreland House for Brentwood's 19th anniversary memorial of the 9/11 attacks. 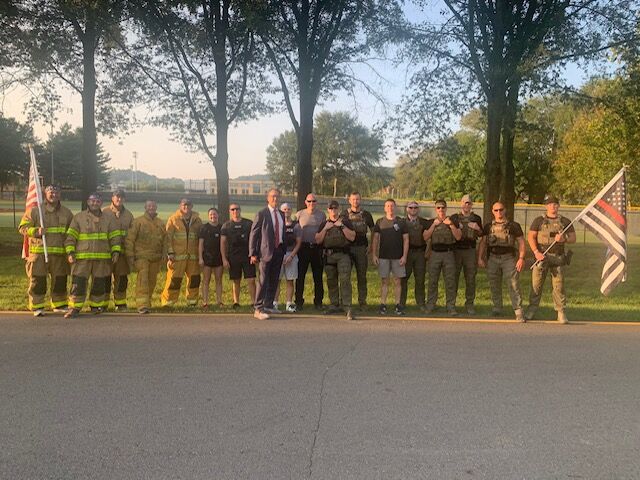 City of Brentwood firefighters and police officers took part in a Remembrance Run in honor of the victims of 9/11.

On Friday the City of Brentwood and City of Franklin each held memorial gatherings in remembrance of the 19th anniversary of 9/11, while the Williamson County Department of Emergency Communications issued a memorial all-call to mark the date.

The Williamson County Department of Emergency Communications held a 9/11 Memorial All-Call to all Williamson County first responders over the radio system early this morning. We wanted to share this moment with you as well. pic.twitter.com/DEDIgoadi9

For the second year The Boyle Company hosted a 9/11 remembrance in front of the Mooreland House to remember the terrorist attacks that killed nearly 3,000 people in New York City, Washington D.C. and Shanksville, Pa. in 2001.

The 11 a.m. remembrance was attended by more than 50 first responders and government, community and business leaders, and featured remarks by Brentwood Mayor Rhea Little.

Little spoke particularly about the sacrifice of first responders across the nation on that September morning.

"As we all remember the tragedy of 9/11 where 2,977 people died, 412 of those were first responders," Little said. "These first responders were individuals who rushed in to try and save others and they did save many as the risk and cost of their own lives."

Public Safety Trauma Services founder Rob Michaels also spoke and led the group in prayer while Angie Thomas performed the national anthem, and Frank Fenton with Bugles Across America performed “Taps” on the second floor balcony of the Mooreland House.

One of the attendees of the service was Samson Smith, a UPS driver who was delivering packages in the CityPark shopping center when the saw the crowd gathering for the memorial.

Earlier in the day members of the Brentwood Police Department and Brentwood Fire and Rescue were joined by City Commissioner Nelson Andrews in the city's first Remembrance Run which saw first responders, many in full gear run a 5K at 7 a.m. with American flags in hand.

BPD Assistant Chief Richard Hickey, who was a Brentwood detective preparing for a court appearance on Sept. 11, 2001, said that this was one way that local first responders can help to keep the memory and meaning of that day alive for those who remember where they were at and those who grew up in the aftermath.

Hickey also added that BPD has a special connection to that tragic day as two of their officers are previous employees of the New York City Police Department, with Officer Frank Moncayo having served with the NYPD on 9/11 and Officer Brien Fletcher serving with the NYPD after 9/11.

Fletcher's wife's father also served with the New York City Fire Department on 9/11 and died in the line of duty that day.

"We have people today out in the workforce who don't remember 9/11 so I think our responsibility and a part of our duty is to keep that memory alive and make sure that they understand what happened on 9/11," Hickey said. "They don't have the same memory and feelings that we had that day but we need to convey that the best we can."

At 8:30 a.m. the Franklin Fire Department and the City of Franklin held a memorial service a one of the city's fire stations which included an honor guard, presentation of the flag, prayer and pledge of allegiance as well as the Tolling of the Bell, a ceremonial ringing of a bell in honor of the fallen first responders.

Johnson spoke of the massive loss of life that day of both civilians and first responders as well as honoring the troops who were sent into war as a result of the attack.

“Additionally we honor and remember the more than 2,000 first responders who have died since 9/11 form 9/11-related illnesses as a result of this attack. This includes not only our firefighters, police officers and EMS workers, but our steel workers, our iron workers and others who worked diligently during the response and recovery, phase at the World Trade Centers and other sites,” Johnson said. “Today we gather to remember so that as a nation, country, community and city we don’t forget.”

Stuckey spoke of the unity and response after the attacks and said that as the United States faces its own challenges in 2020, unity and service will be key to our future.

"This September 11th we stand in the midst of a global pandemic. Just like that 9/11 what we’re in the midst of now is changing the way we think, changing the way we respond and it’s up to us to take on those challenges,” Stuckey said. “How we respond, how we serve, how we take care of one another matters now more than ever and as we remember let us also learn those lessons.”

View the entire Franklin service below.