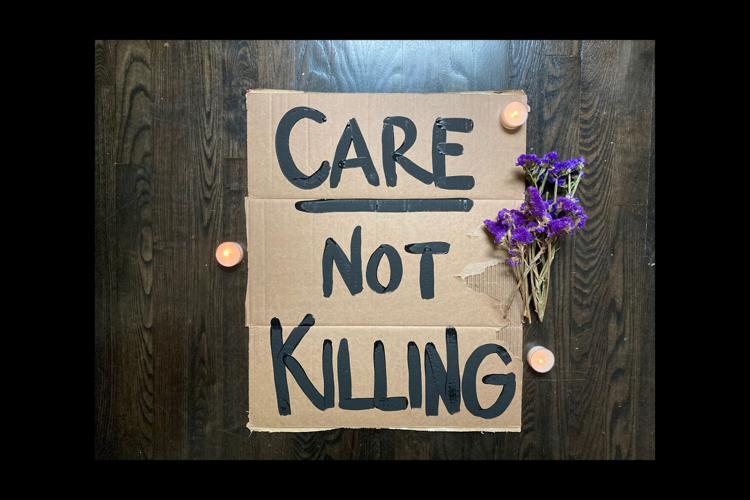 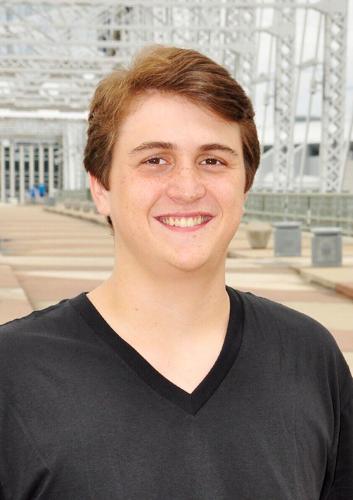 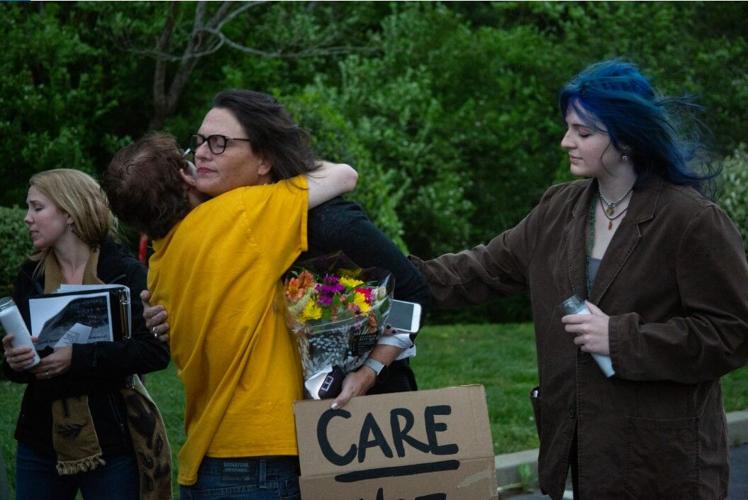 Jacob Griffin's mother is embraced during a vigil for Griffin.

Several dozen community members gathered last week to remember the life of Jacob Griffin, who was shot and killed in a standoff with the Metro Nashville Police Department while Griffin was experiencing a mental health crisis.

The outdoor vigil took place on Thursday evening behind the Goodwill at the corner of Nolensville Road and Concord Road, just yards from where Griffin was killed in a homeless encampment where he was living.

The vigil was cut short by severe storms that rolled in and forced the remembrance to end just minutes after it began, but that did not deter attendees from connecting and honoring Griffin, with some choosing to move the vigil online.

One of those people was Lindsey Krinks, Director of Education and Advocacy at Open Table Nashville, an interfaith homeless outreach nonprofit who held a virtual vigil in the form of an online video featuring prayers, reciting the names of other victims and the lighting of candles.

“When something like this happens, we have to pause, we have to come together, we have to have space to grieve, process, and honor the life that was lost,” Krinks said. “Even though the vigil was cut short because of the storms, it was still so powerful to gather together in person and to both honor Jacob’s life and point toward alternative ways to respond to crisis calls. Jacob should still be with us today, and it is up to all of us to demand better care for our neighbors who are struggling.”

Griffin’s obituary speaks openly about his mental health struggles and his love and passions that he will be remembered for.

“Before the onset of his mental illness, Jacob was a vibrant, accomplished, sweet, giving young man,” his obituary reads. “He was an above average baseball player, a brilliant math student, a computer whiz, and was all around funny and loving. He played the drums in the high school band, joined the ROTC where he learned to fence and loved riding his motorcycle.”

“He was gentle and kind and loved animals,” the obituary continues. “He was quiet and quick with a pun. His sublime intelligence, quiet demeanor, and fierce curiosity made for fascinating discussions on a broad range of topics, hundreds of hours of cribbage games with his mom, and one of the most astonishing minds his family members ever encountered. He built computers from spare parts, disassembled clocks, redesigned them, then reassembled them so they would ‘work better,’ which they often did, and was incredibly creative in so many astonishing ways. He is deeply loved and he will be missed.”

For Krinks, Jacob Griffin wasn’t just a name in a headline, but someone that their outreach team had met a couple of years ago on a cold winter night.

“We knew him as someone who was thoughtful, polite, and had a gentle soul. One of our other outreach colleagues from another organization knew Jacob very well and was in the process of helping him secure a job,” Krinks said in an email. “He remembers Jacob as a teddy bear who loved motorcycles and how things work. He was bright and looked out for his friends.”

Krinks and others are advocating for communities to respond differently to people who are experiencing a mental health crisis, versus relying on law enforcement who sometimes respond to situations with violence as Griffin experienced.

At Open Table Nashville, that is seen in the form of a person-centered approach and trauma-informed care, “always remembering that each person has different strengths and needs, and that the person’s behavior often has roots into past traumas,” Kirinks said.

“Jacob was not a threat to be neutralized or a target to be negotiated with. He was a human being — a son, a brother, a friend — who was experiencing a mental health crisis and desperately needed care,” Krinks said. “Trained responders know that when someone is in the midst of a mental health crisis, they are often not themselves and have a difficult time thinking logically. It is difficult to reason with someone who is experiencing delusions, so great care has to be taken to build trust with the person, to listen with compassion, to take their concerns seriously, to find out what will make them feel safe, and to help them return to themselves.”

In attendance at the vigil was Griffin’s mother, who was embraced by family and friends, sharing in their grief and tragic circumstances surrounding Griffin’s death.

His mother had called 911 on her son for fear of what he could do, and knowing what could and did happen to him once police arrived.

“I will have to live the rest of my life knowing that my son died alone and afraid and that I was one mile away when they killed him," she said. “And it’s because I asked for help. The consequence of asking for help was losing my son,” his mother said in an interview with The Tennessean.

Krinks said that there is a growing movement in Nashville of people and communities who want to address how we respond to mental health emergencies, especially from law enforcement, with the help of knowledge and experiences with groups from other cities, such as a community-based public safety organization called CAHOOTS (Crisis Assistance Helping Out On The Streets) based in Eugene, Ore.

“Our friends at NOAH (Nashville Organized for Action and Hope) are proposing a similar model for Nashville called HEALS (Health Engagement and Liaison Services). It is crucial that we invest in these models and that we have a crisis response team that is independent from the police, rather than a 'co-response' model,” Krinks said.

And while rain caused the vigil to end prematurely and move online, that collective mourning of a community that hopes for a change continues to be seen plainly in messages written in black sharpie on scraps of brown cardboard: “Care Not Killing.”

"Jacob's memory will live on in our work to create a better world," Krinks said.

A GoFundMe has been established in Griffin's memory and can be found here.