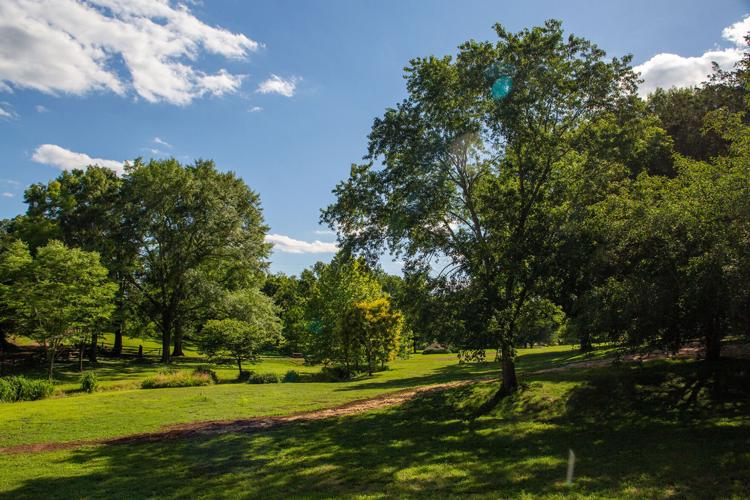 Part of the property visible from Vaughn Road 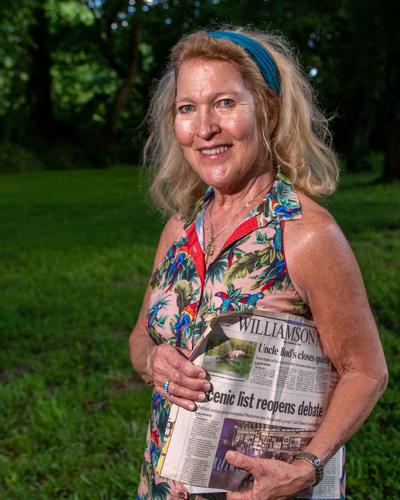 Activists working to prevent the development of mansions on a tract of green space along the Harpeth River in Williamson County have received a boost in their efforts.

The Williamson County Heritage Foundation placed Vaughn Road on its annual Sites to Save list in May, identifying it as part of the Old Natchez Trace, a historic highway used by Native Americans since precolonial times and later traversed by white settlers in the 1800s. Vaughn Road cuts right through the proposed development.

The land belonged to late civic leader Alice Hooker — sister-in-law of prominent Tennessee political figure John Jay Hooker and a member of the Ingram family — who placed almost 189 empty acres into a restrictive covenant before her death in 2019. In 2020, her children — led by her daughter Lisa Hooker Campbell — removed the covenant and sought permits to build 128 residential lots on 175 acres and seven lots on 14 acres, sparking outcry from neighbors and conservationists.

The Williamson County Planning Commission denied the 175-acre proposal but approved the 14-acre tract, where Vaughn Road is located.

Laura Turner, the founder of Citizens for Old Natchez Trace and one of the main organizers against the development, says that while historical recognition won’t prohibit construction, she hopes public pressure will spur the family to conduct studies of the land and ultimately abandon development. “We’re trying to … make the argument that this is priceless,” she says.

The Williamson County Heritage Foundation’s announcement followed another victory for the group, when a judge ruled that the conservationists’ petition to have a higher court review the plans was valid and denied a motion to dismiss it. Until the petition is settled, the development is stalled.

Activists have also raised concerns about wildlife living on or near the location — including a bald eagle spotted nearby — and the fact that Native American artifacts and graves may be located on the property.

Former state archaeologist Nick Fielder, hired by Citizens for Old Natchez Trace, notes that there is a documented Mississippian settlement on the side of the river opposite the Hookers’ property. Additionally, artifacts and graves have been found within a three-mile radius of the land. Fielder says it’s unlikely another large settlement will be found on the Hooker property, but he would expect to find evidence of smaller farms and homes.

As far as Fielder knows, the Hooker property has not been surveyed.

Finding Indigenous graves could create a serious complication for the development, as Tennessee law would require any gravesites to be preserved or remains reinterred elsewhere. There are, however, examples of landowners preserving such sites as they build on the land.

Three miles south of the Hooker property sits Old Town in Franklin. The archaeological site is owned by the wealthy Frist family, and while it is an active farm, the land also contains graves, evidence of temples and two mounds that were part of a Mississippian settlement. Archaeology professor Kevin Smith lends his historical expertise to the Frists to help them be, in his words, responsible stewards of the land. His work there precedes the Frists’ ownership — he was first called out to the land in 1991 when the previous owner, musician Jimmy Buffett, found stone-box graves while expanding his mansion.

Critics of the Hooker property development are aware their qualms may sound like “not in my backyard”-style complaints, though Smith says they’re just calling for more thoughtful approaches — especially as the number of acres with potential artifacts dwindles. He adds that developers who don’t survey ahead of time may also find themselves dealing with a much higher price tag if it proves necessary to relocate graves or drum up new plans to build around them.

Smith notes that it can be hard to drum up interest and investment in Indigenous history from non-Natives, even though the Missisippians were a civilization as complex as the Aztecs.

Hunter Campbell, a self-described amateur archaeologist and founder of the Native activist group Justice for All Tribes, shares the sentiment.

“It shouldn’t have to be [your history] for you to care,” says Campbell, who identifies as Oglala Lakota and Taos Pueblo. He says his organization supports the protest against the development.

Establishing and preserving archaeological sites isn’t easy, but it can happen. The site of Aaittafama’ — formerly known as Kellytown — is currently a large field of green space at the corner of Hillsboro Road and Old Hickory Boulevard in Forest Hills. That land was the subject of a dispute when stone-box graves were discovered during a road expansion in 1999, leading to the discovery of more evidence that a settlement once occupied the location. After 10 years in the courts, the Tennessee Department of Transportation decided that rather than move the graves, they would instead pour concrete over them and continue with the road expansion. The park is now owned by Nashville’s parks department, purchased with contributions from a nonprofit group.

“In my role as executor of my late Mother’s estate I have been tasked with fulfilling her wishes as clearly contained in her last will and testament,” Lisa Hooker Campbell says in a statement through her lawyer James Weaver. “I have taken no actions in the past, nor will I in the future, inconsistent with my legal obligations as the Executor of the Estate, nor inconsistent with her wishes as expressed in her will.”

Weaver followed up, writing, “Mrs. Campbell … is bound by the laws of the State of Tennessee and her ethical and [fiduciary] duties to the beneficiaries to carry out her Mother’s final wishes.” He also criticized the public campaign against the development, saying conservationists had conducted “character assassination” and libel against his client.

Weaver did not answer a question about surveying the land, though he told Tennessee Lookout in April that one had been conducted and nothing had been found.

Campbell is suing the Williamson County Planning Commission over its denial of the larger development. In previous statements, she said she pursued development of the land because it would have lost value under new zoning laws that permitted just one unit per 5 acres. The Hooker property’s proposals were submitted before the change and grandfathered in.

Matt Masters contributed to this report.