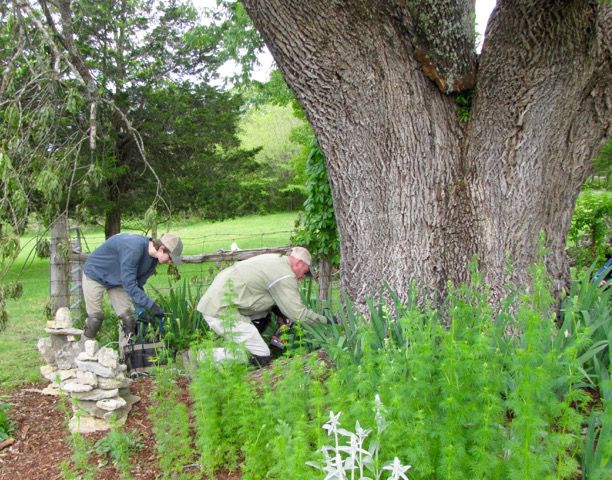 Matt Geater from Grassland Horticulture injects a chemical in the base of an ash tree in Thompson's Station, while Jack Hassell helps. Believed to be the largest ash tree in Williamson County, it was showing signs of decline not long ago. 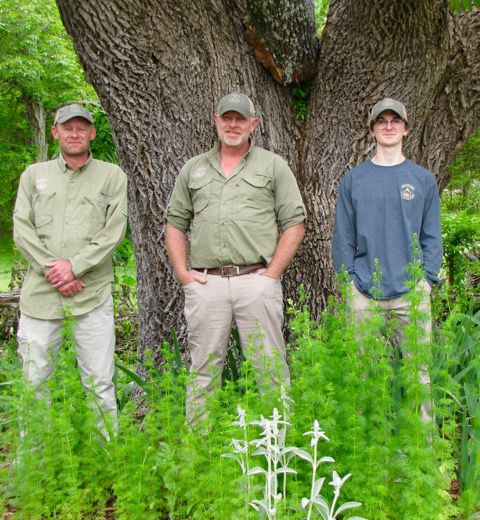 J.T. Cunningham (center) stands in front of the giant ash tree with his crew from Grassland Horticulture, Matt Geater (left) and Jack Hassell. 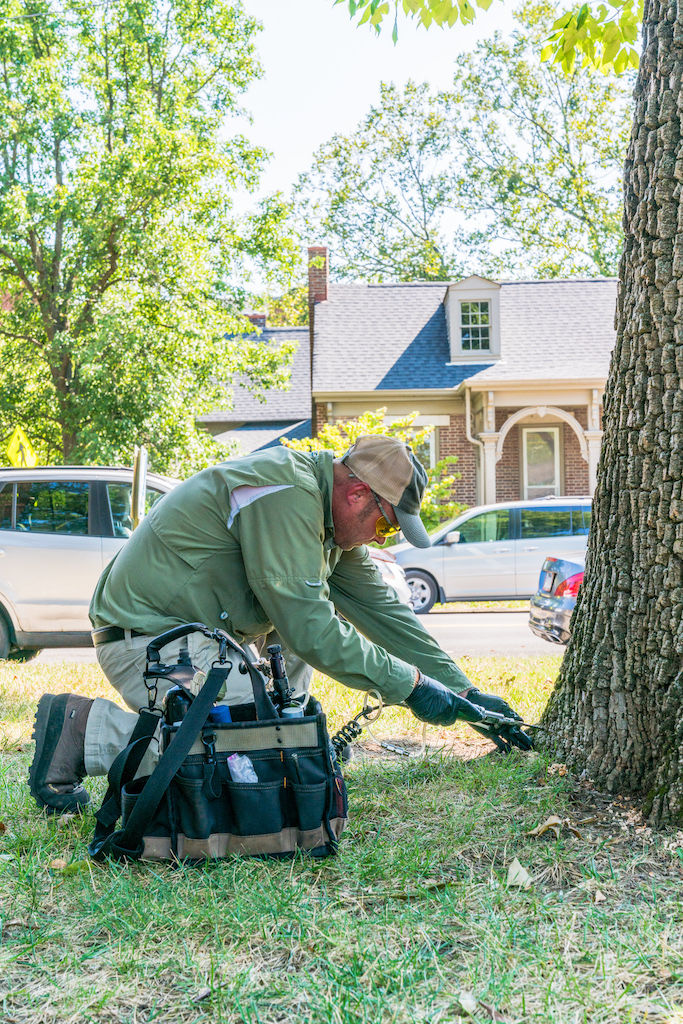 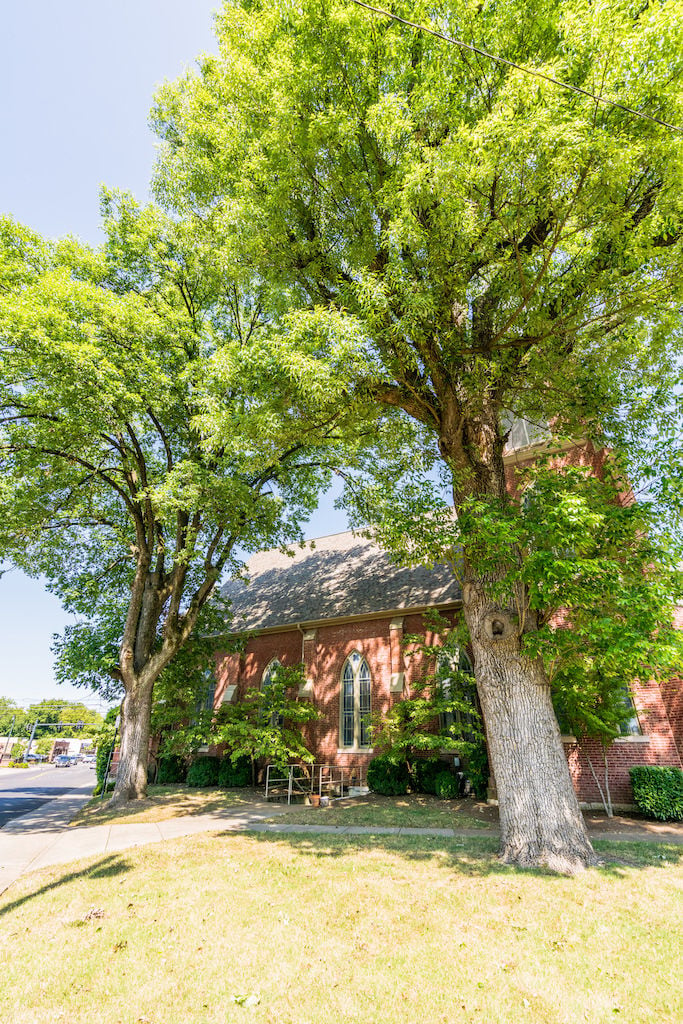 Grassland Horticulture and Arborjet treated a couple of large ash trees in the yard of the Franklin First United Methodist historic sanctuary. 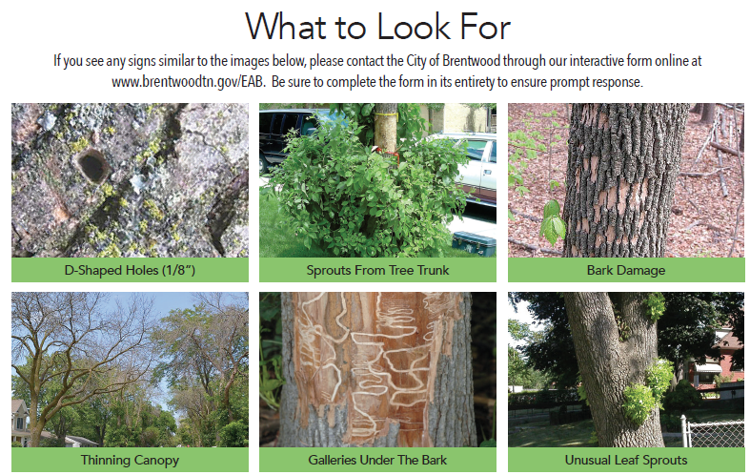 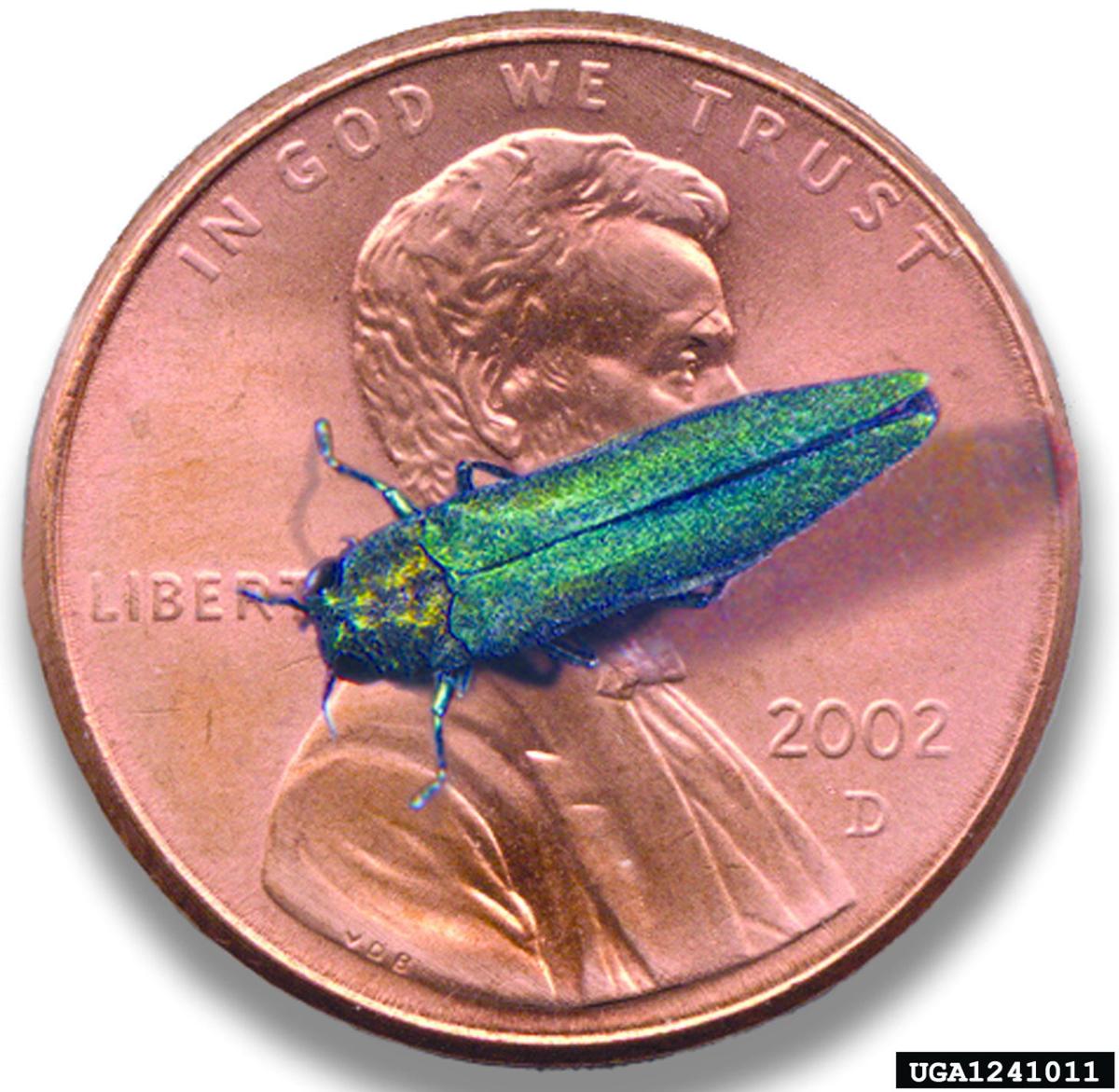 The emerald ash borer may be a tiny insect, but it is doing massive damage to ash trees.

Matt Geater from Grassland Horticulture injects a chemical in the base of an ash tree in Thompson's Station, while Jack Hassell helps. Believed to be the largest ash tree in Williamson County, it was showing signs of decline not long ago.

J.T. Cunningham (center) stands in front of the giant ash tree with his crew from Grassland Horticulture, Matt Geater (left) and Jack Hassell.

Grassland Horticulture and Arborjet treated a couple of large ash trees in the yard of the Franklin First United Methodist historic sanctuary.

Before she was appointed to the Brentwood Tree Board in 2019, Sandy Shiveley admits she wasn’t all that familiar with the trees that stood in the yard of her very own home.

“They’re huge and they’re lovely,” she said, acknowledging that she valued them even if she couldn’t call their names. Straight and tall as they are, they seemed to Shively as trees that have been standing for generations and would remain that way for generations to come.

In other words, she took them for granted.

Until, that is, she learned that eight of the trees on her lot are ash trees — and like countless other ash trees in Williamson County and throughout Tennessee and numerous other states, they are in danger of becoming extinct.

The culprit is the emerald ash borer, an invasive insect that is originally from Asia and was first seen in the United States in 2002, when it was discovered in Michigan. It has since caused widespread tree destruction in various parts of the country, including in Tennessee, when it was discovered at a truck stop in Knoxville in 2010. The EAB made its way to Williamson County in 2015.

“There has been a lot of research on how [the EAB] moves, how it progresses in an area and what to expect,” explained Tim Phelps, Communications and Outreach unit leader for the Tennessee Department of Agriculture’s Division of Forest. “Unfortunately, there is no silver bullet to strike this thing out. It is becoming naturalized in the United States, and it’s our generation’s version of the American chestnut tree being wiped out [in the early 1900s].”

As soon as Shively found out about the EAB and its destructive nature, its threat to eliminate a whole species of trees, she knew she needed to take action. Her ash trees had not been infected, but “it was important for me to treat my trees as soon as I found out about the emerald ash borer,” she said. “Since then I’ve become familiar with what they are.

“Now I’m a real advocate in helping people get their trees treated.”

So is J.T. Cunningham, who’s a veritable caped crusader in his attempts to save ash trees. As the owner of Grassland Horticulture, Cunningham offers a variety of services related to tree care in general as well as lawn care and landscaping. His urgent task, however, is to spread the word about the dangers of the EAB and to get as many ash trees treated as possible.

After the insect was discovered in Williamson County, “we’ve been treating them hard and fast ever since,” Cunningham said. “It’s such an important issue, it’s basically where we’ve concentrated most of our efforts.

“It’s the biggest environmental disaster to ever hit Tennessee,” he added ominously. “Every single ash tree, almost 13% of our tree canopy, are about to die over the next four years. [Left untreated], every single one in Middle Tennessee will be dead.”

Working with a Massachusetts-based company named Arborjet Inc., which developed technology in 2000 to effectively manage and control exotic and native insects and diseases threatening natural and urban forests, Cunningham has treated nearly 1,500 trees over the past four or five years. He uses a method in which a chemical is injected into the base of an ash tree and works into the tree’s tissue, which is then evenly dispersed throughout the canopy. The treatment targets the larvae tunneling in the tree, which stops the most destructive phase of this insect.

“Our process is completely safe on the trees and will help in restoring the tree's natural ability to heal itself, and no further damage should occur,” said Cunningham, who was recently with his staff in treating a tree in Thompson’s Station considered the largest ash in Williamson County.

Now is the time for treatment

It is estimated that Tennessee has more than 270 million ash trees that amount to approximately $11 billion in value. They’re not major species such as oak and hickory in terms of usage, but their wood has many uses in products such as furniture, flooring, cabinetry, baseball bats and tool handles, among others.

“It’s a significant economic value across the state, and there is also the ecological value that is much more difficult to measure in a dollar amount,” Phelps said. “There’s the wildlife value — these trees provide seed for birds that use it as a food source, and they provide shelter.”

For individual homeowners who may have an ash tree or two in their yard, treatment can help save a tree if done in time. The TDOA’s Division of Forestry has included a decision guide on its website to help homeowners determine if a tree is worth saving. Landowners who may have a forest of ash trees should consult their nearest forester for advice, according to Phelps.

“If you do want to harvest or get some value out of the current stand of trees, now is the time to really be considering that because over time we do expect that the larger trees will start to decline. We’re on that five- to six-year exponential scale. It’s somewhat harshly called the emerald ash borer death curve.”

As soon as Shively heard terms such as “death curve,” “extinction” and “environmental disaster” learned other details as a member of the Brentwood Tree Board, she wasted no time in getting her ash trees protected. She wants others to take the same action.

“I want to reach out to different groups, homeowner associations and, as a retired teacher, I want to spread the word to schools as well," she said.

“These ash trees are gorgeous and I don’t want to lose them.”