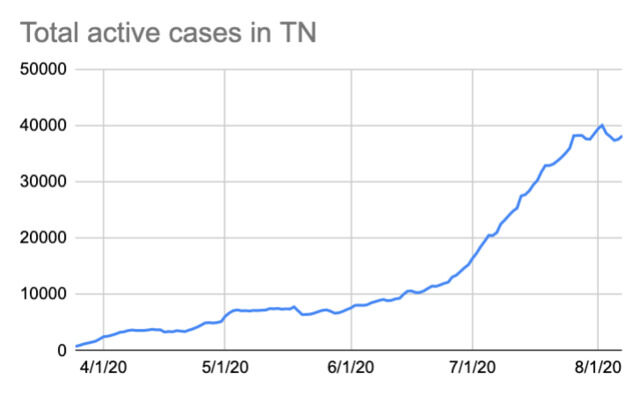 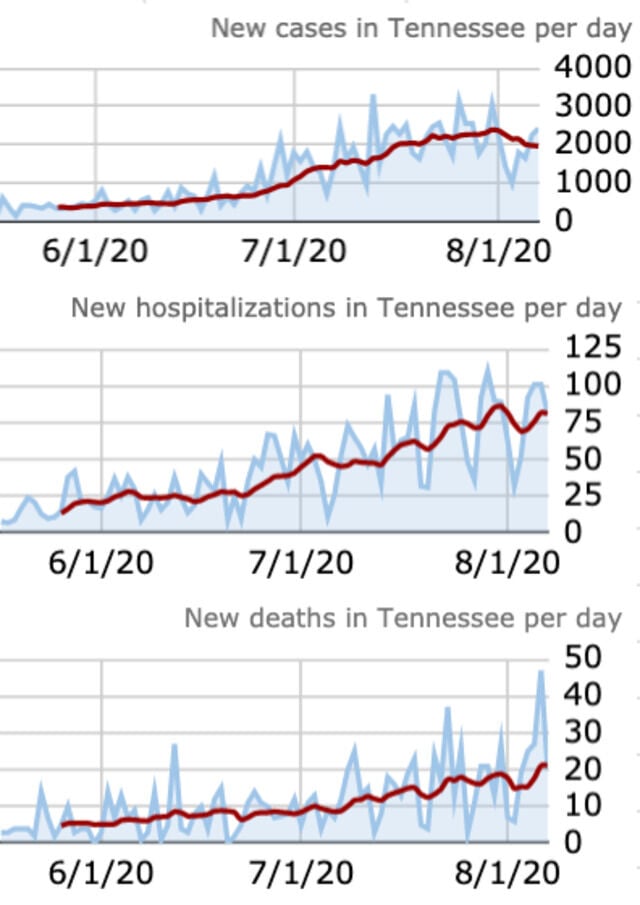 25 have died of the virus in Williamson and 40,490 negative tests have been processed thus far.

This was the largest amount of tests turned around this week after testing throughput decreased 20 percent from last week. The positivity rate has remained constant at around 9 to 10 percent in recent weeks.

The number of active cases in Tennessee has risen 13 percent in the past two weeks, signaling continued growth in infections across the state but at a slower rate than for much of July. On Thursday, the state reported 38,219 residents currently infected with COVID-19.

The number of patients hospitalized with COVID-19 has remained relatively flat in the past two weeks, and is now slightly lower than where it was two weeks ago, with 1,082 people currently hospitalized throughout 106 facilities and making up about 11 percent of all hospitalizations statewide. Another 324 hospitalized individuals are awaiting test results.

In terms of capacity, the state reports that 18 percent of inpatient beds and 16 percent of ICU beds remain available. Nearly 67 percent of the state's ventilator supply — which was low in March until officials acquired about 1,000 more — is still available.

An analysis by NPR determined the state of Tennessee needs seven times more contract tracers than what it has to keep up with the number of new cases being reported each day.

"Increasing case counts and turn around times are hindering our ability to slow the spread through contact tracing," Jane Yackley of the Tennessee Department of Health told NPR in a survey.

In July, Health Commissioner Lisa Piercey said the state was looking to have about 1,400 contact tracers online by August. The department of health was unable to provide the current number of tracers employed by the state by publishing time Friday afternoon.