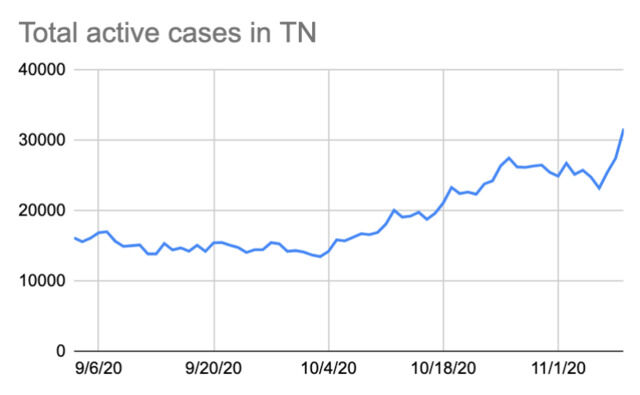 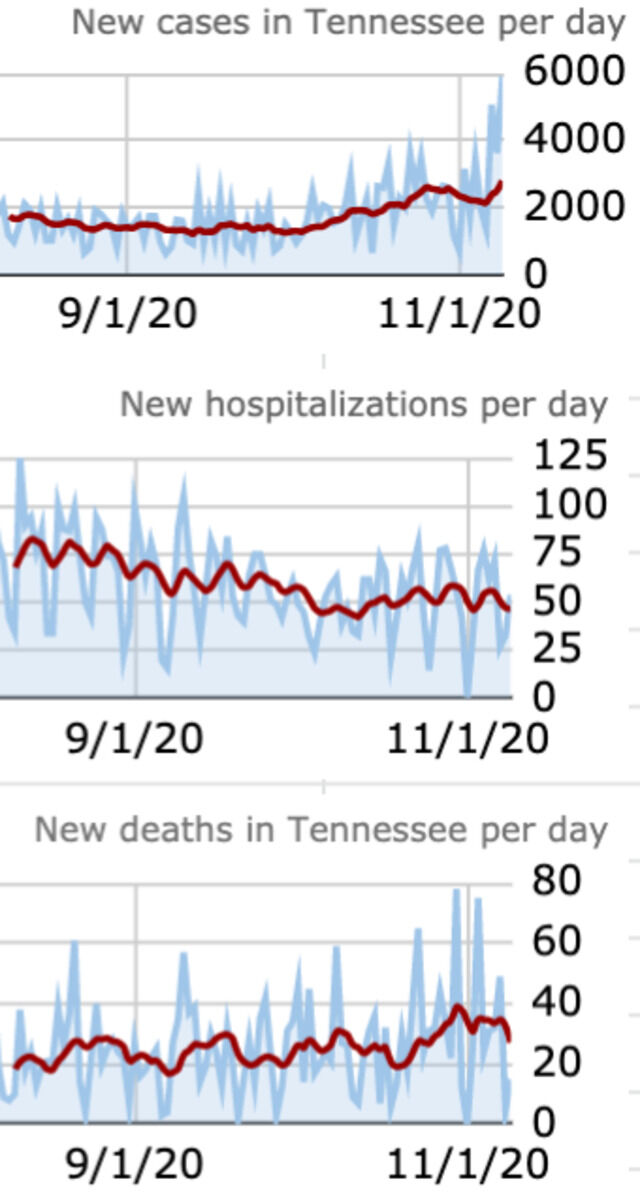 Williamson County saw a startling new number of COVID-19 cases come in over the weekend as the state went through a backlog of new cases.

538 is the increase from last week, pushing the overall number for Williamson to 8,517 since the pandemic's start.

7,333 people in the county have either recovered or had their cases deemed inactive, and 61 have died. 95,701 negative tests have been conducted thus far.

An additional 8,707 new cases were reported over the weekend.

The large swaths of cases and tests reported over the weekend and on Monday include a backlog of positive cases from last week that had previously gone unreported due to the state’s surveillance system undergoing an update.

Of the total number of cases, 10,732 people have been hospitalized and 3,610 have died — up 54 and 15, respectively, from the numbers 24 hours earlier. More than 3.9 million tests have been administered in the state.

The number of active cases in Tennessee has risen 15 percent in the past two weeks, with the state reporting 31,645 individuals currently infected with COVID on Monday — the highest number of infections since state health officials changed the way they calculate the metric in September.

The number of patients hospitalized with COVID in the state is at its highest point of all time, with more than 1,548 people currently being treated for the virus across 114 hospitals. Hospital admissions attributable to COVID have grown 15 percent in the past two weeks.

In terms of capacity, the state reports that 18 percent of inpatient beds and 14 percent of ICU beds remain available. Nearly 67 percent of the state's ventilator supply is still available.

In an Op-Ed published by The Tennessean on Monday, Nashville Coronavirus Task Force Chairman Alex Jahangir said the national COVID-19 response has been “disastrous” and called on President-elect Joe Biden to fix it.

To the incoming administration, Jahangir identified improving data sharing and collection, centralizing a federal supply chain and creating transparency within the federal distribution system as key steps to consolidating local and federal response efforts. He said a “disconnect” from federal officials has made his job managing the virus more challenging and requested more federal leadership and resources moving forward.

“From the beginning, we have heard the President announce, ‘Anybody that wants a test can get a test,’ only to deal with the fallout when there were no tests to be had. We’ve had to make decisions about people’s health and well-being even as crucial federal data has been withheld from us,” Jahangir wrote. “Most frustrating of all, in the absence of a centralized supply chain, we’ve been forced to scramble for life-saving equipment to the point of out-maneuvering one another for scarce resources.”