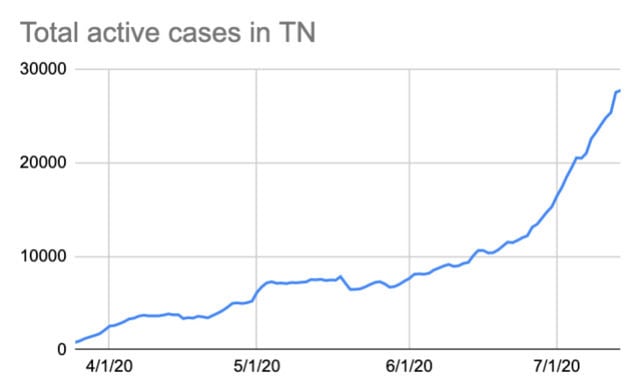 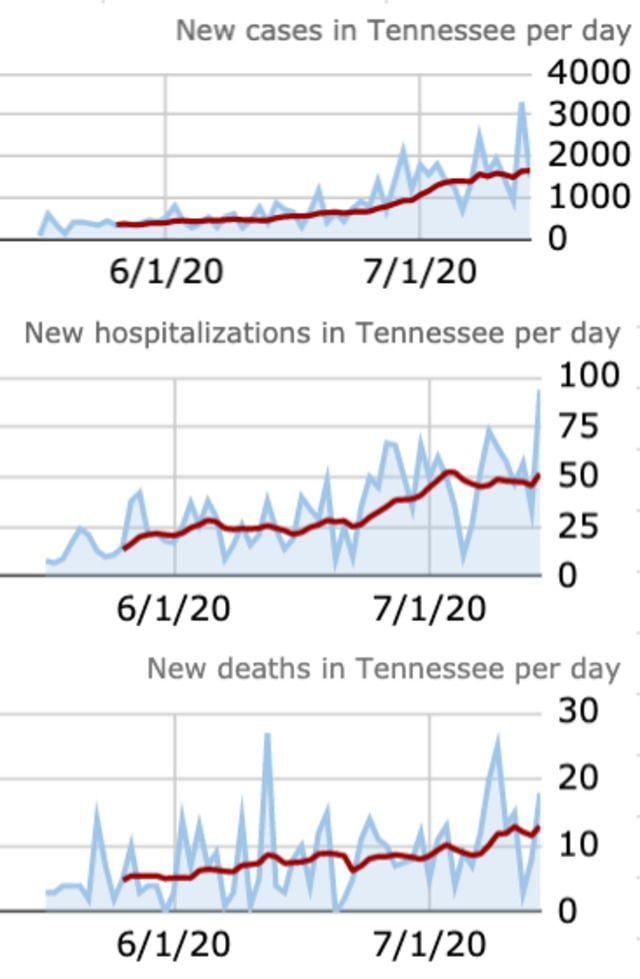 The number of active cases in Tennessee has risen 68 percent in the past two weeks, a slightly slower rate of growth than the mark of late last week. On Tuesday, the state reported an all-time high of 27,749 residents currently infected with the virus.

The number of patients hospitalized with COVID-19 has risen more than 46 percent in the past two weeks with 864 people hospitalized throughout 103 facilities statewide.

In terms of capacity, the state reports that 21 percent of inpatient beds and 21 percent of ICU beds remain available. Nearly 69 percent of the state's ventilator supply — which was low in March until officials acquired about 1,000 more — is still available.

In Williamson County, new positive cases were down to only a 51-case increase, now standing at 1,990 overall. It's a contrast to the weekend's record spike of 269 new cases.

Sixteen people have died in the county, and 25,976 negative tests have been processed thus far.

TDOH has released an interactive map showing how testing rates and clusters of cases per 100,000 residents have varied by zip code throughout the state, Williamson County included, for a 21-day stretch through July 2.

Democrats in the state Senate are calling on Republican Gov. Bill Lee respond more forcefully to the worsening COVID-19 pandemic in the state.

“I know that it’s become very political but even our president wore a mask the other day,” she said Tuesday. “If Texas can do it then certainly Tennessee can do it.”

Lee has granted counties around the state the authority to issue mask mandates, and a few have done so, but the Democrats are calling for a unified state response as case counts and other health metrics continue to get worse.

“The last two weeks should be a wakeup call that Tennessee has a failed response to COVID-19,” Senate Minority Leader Jeff Yarbro (D-Nashville) said. Tennesseans need Gov. Lee to do a complete reboot of his strategy, and we need him to do that now before it’s too late.”

The number of workers infected at Vanderbilt University Medical Center has doubled in the past three weeks, trending alongside the rapid influx of new infections and hospitalizations related to COVID-19.

A total of 461 staff members have been infected across VUMC’s network during the pandemic, according to the medical center’s weekly update, and 260 have so far recovered and are back at work. The medical center overall has treated 471 patients so far for complications with the virus. Of those hospitalizations, nearly 396 have been discharged and 37 have died.