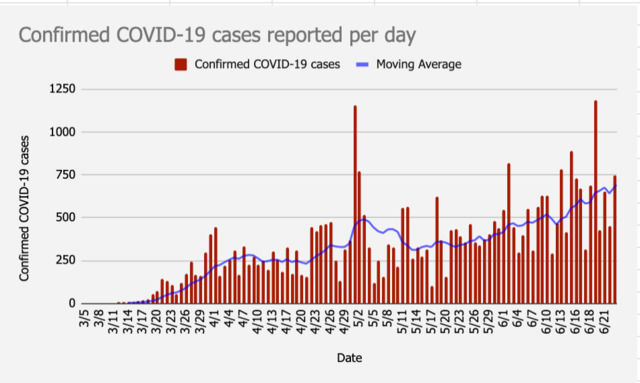 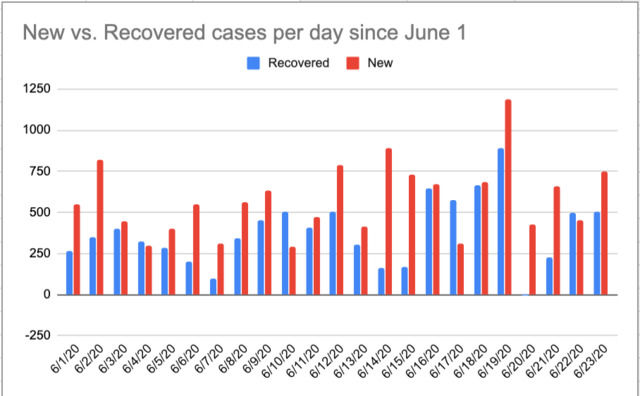 The Tennessee Department of Health has reported a total of 36,303 cases of COVID-19 across the state, up 750 cases since Monday from 5,310 new test results.

The number of active cases in Tennessee continues to rise. On Tuesday, the state reported an all-time high of 11,704 residents currently infected with the virus.

Williamson County saw its 14th death from the virus reported Tuesday, per the state, with overall cases reported at 813. 14,672 negative tests have been conducted thus far.

With coronavirus cases on the rise, Gov. Bill Lee urged residents to go out and spend money at local businesses while acknowledging ongoing efforts to control the disease’s spread.

“We are closely watching those numbers,” Lee said. “What we’re watching for are trends.”

With a hot spot continuing in Hamilton County, Health Commissioner Lisa Piercey said the state is now responding to flare-ups in Wilson and Hamblen counties.

And though the state is working on adding contact tracers, Piercey said officials still don’t know where half of the new cases are coming from, which “tells us that we have more community spread,” she said. Early in the pandemic, each case would have two or three contacts, but now some confirmed coronavirus patients have eight or more contacts as people move around more, Piercey said.

After the state House and Senate failed to reach an agreement on COVID-19 liability protections for businesses and other organizations, Lee said Tuesday he is still considering a possible special session to address the “unfinished business.”

The House and Senate could not agree on whether the protections should be in effect upon passage of the law or dating back to the start of the pandemic. Lee said he is also considering other options like an executive order.

“The best way to do it is through legislation,” he said.

Meanwhile, Lee said, he is waiting for Senate and House leaders to reach an agreement on parameters of a liability bill to be considered in a special session.

Nashville-based private lab company PathGroup has been chosen to launch a new sequencing-based COVID-19 test that will allow the company to rapidly scale their testing capacity.

The new test, COVIDSec, which accommodates more than 3,000 samples per run, was designed and manufactured by San Diego-based Illumina and received its emergency authorization from the U.S. Food and Drug Administration on June 9. Illumina is providing early access to a limited number of PathGroup labs, according to a press release. One of those is in Nashville.

“The use of next-generation sequencing technology allows us to rapidly scale our diagnostic testing capabilities, which is critical as workplaces and schools continue to reopen,” said Ben Davis, PathGroup's president and CEO. “We are proud to partner with Illumina to launch this groundbreaking test.”