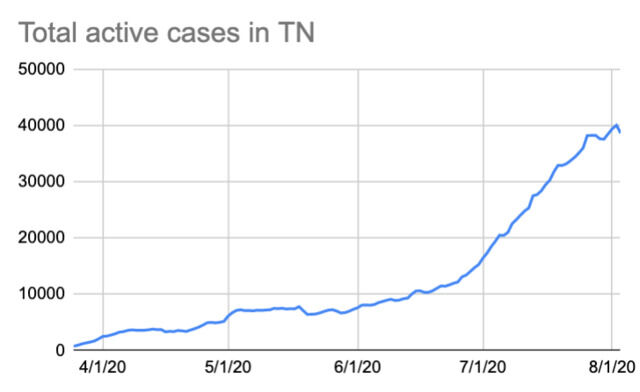 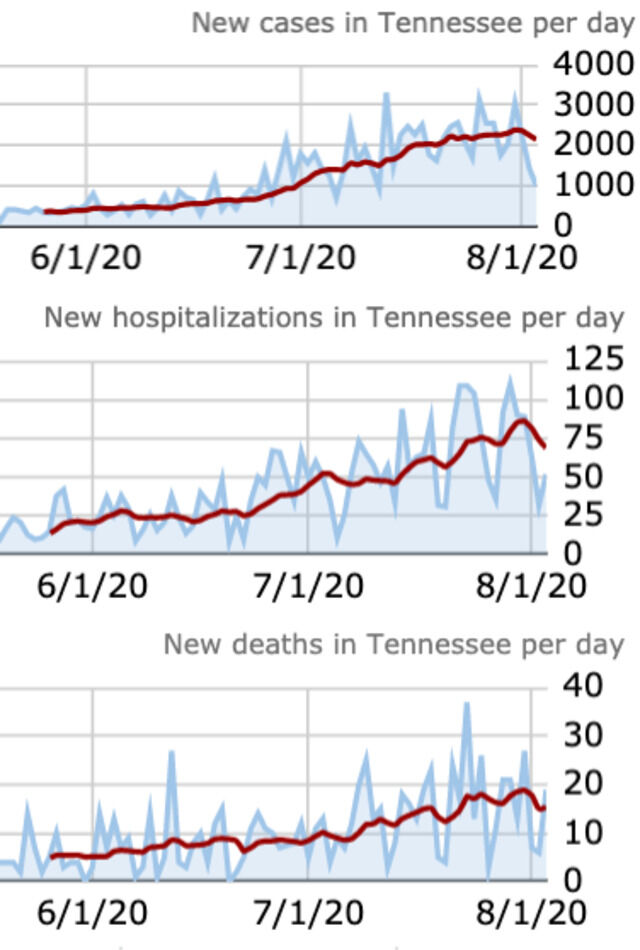 137 new cases were reported in the county over the weekend, continuing a trend that was, at some points in July, showing 200-250 new cases on the Monday report. The total number of cases is now at 3,269.

Twenty two people have died of the virus in the county, 38,716 negative tests have been processed thus far.

The Tennessee Department of Health has reported a total of 105,959 cases of COVID-19 across the state, up 1,009 cases since Sunday on 12,201 new test results. Over the weekend, 3,668 additional cases were reported.

The number of active cases in Tennessee has risen 21 percent in the past two weeks, signaling continued growth in infections across the state but at a slower rate than for much of July. On Monday, the state reported there are 38,666 individuals currently infected with COVID-19.

The number of patients hospitalized with COVID-19 has risen 4 percent in the past two weeks, with 1,157 people hospitalized throughout 100 facilities and making up about 11 percent of all hospitalizations statewide. Another 266 hospitalized individuals are awaiting test results.

In terms of capacity, the state reports that 22 percent of inpatient beds and 16 percent of ICU beds remain available. Nearly 68 percent of the state's ventilator supply — which was low in March until officials acquired about 1,000 more — is still available.

A new report published on Monday by Vanderbilt University’s Department of Health Policy underlined a recent shift in the spread of COVID-19 from densely populated urban areas to more rural counties throughout Tennessee.

At the beginning of May, nearly 76 percent of COVID-19 cases originated from the Nashville and Memphis regions. By the end of July, that number had dropped to 46 percent as the cities’ outbreaks begin to stabilize. That does not mean large metro areas are experiencing fewer cases, the report notes. Rather, it shows that the virus’ spread has become more aggressive in rural counties that previously have been relatively unaffected until now.

The shift also means that more people from rural or small metropolitan areas will experience a higher rate of hospitalization for COVID-19, putting stress on rural health care systems that typically have fewer resources per capita. Rural hospitals will likely fill hospital beds quicker than the large hospitals found in Nashville and Memphis, and thus will need to send overflow to metro areas if the local outbreak depletes its hospital capacity.

In the report’s conclusion, researchers wrote: “If smaller metro areas have fewer resources for contact tracing, or if individuals and policymakers in those communities are less likely to adopt mitigation strategies (e.g., mask ordinances and limitations on large group gatherings), there is the potential for the disease to spread further.

"There is also the potential that as numbers increase in those areas, depleted health care resources may result in transfers of patients back to facilities in metro areas. It is critical to watch these trends and to ensure that communities that are being hardest hit are able to respond quickly and adequately.”