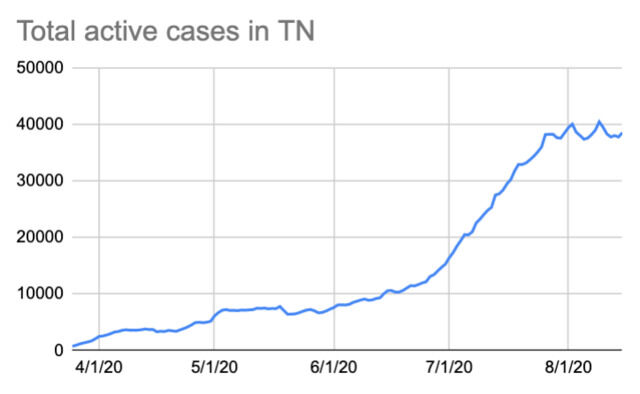 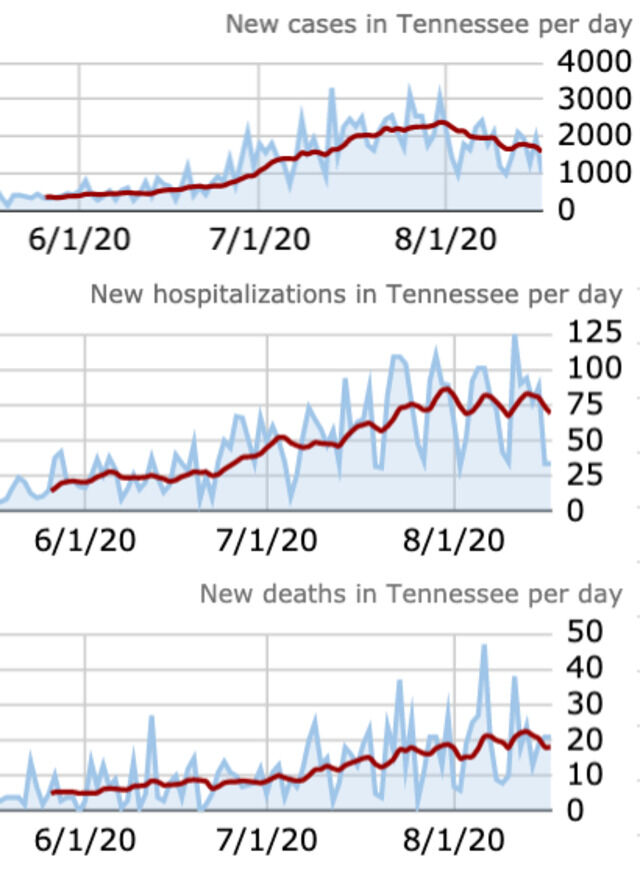 The weekend's report of COVID-19 cases is in for Williamson County.

152 new cases were added to the overall tally for the county, which now stands at 3,893. There are 1,244 active cases in the county as of Monday, which means that 2,623 have recovered.

A 26th death has been added to the tally, and 44,726 negative tests have been processed thus far.

The Tennessee Department of Health has reported a total of 130,458 cases of COVID-19 across the state, up 1,036 cases since Sunday on 13,746 new test results. An additional 3,250 cases were reported over the weekend.

The number of active cases in Tennessee has remained relatively flat in the past two weeks, perhaps signaling a slowing of the virus’ spread — albeit with fewer tests being reported per week and a positivity rate that has remained constant around 9 percent. On Monday, the state reported 38,545 residents are currently infected with COVID-19.

The number of patients hospitalized with COVID-19 has fallen nearly 13 percent from the figure of two weeks ago, with 959 people currently hospitalized throughout 97 facilities and making up about 11 percent of all hospitalizations statewide. Another 180 hospitalized individuals are awaiting test results.

In terms of capacity, the state reports that 20 percent of inpatient beds and 16 percent of ICU beds remain available. Nearly 68 percent of the state's ventilator supply — which was low in March until officials acquired about 1,000 more — is still available.

The top public health officials leading COVID-19 responses in Nashville and across the state spoke at Launch Tennessee's annual 36|86 conference on Monday. Here are excerpts of what they said:

Lisa Piercey, Tennessee Department of Health Commissioner. "The narrative has seemed to creep over time and now you hear people focused on completely minimizing or even eliminating disease spread. I think that’s pretty impractical and unreasonable because this is a novel virus, which means it’s completely new and none of us have any level of immunity to it.

"It is not a reasonable or practical goal to have no spread of the disease. It’s going to continue spreading until we have some kind of vaccine or therapeutic [treatment] or, heaven forbid, herd immunity. … We’re kind of in this for the long haul. As much as no one wants to hear that, I don’t want to say it either. The short answer is, we’ll do it for as long as it takes, and it appears as if it’s just not going to slow down any time soon.”

Alex Jahangir, Metro Nashville Coronvairus Task Force Chairman: "Personal responsibility matters but a laissez-faire approach — survival of the fittest — is not the right answer for how you run a society. Society should not just accept that people are going to die. ... The federal response could have been a lot, lot better."