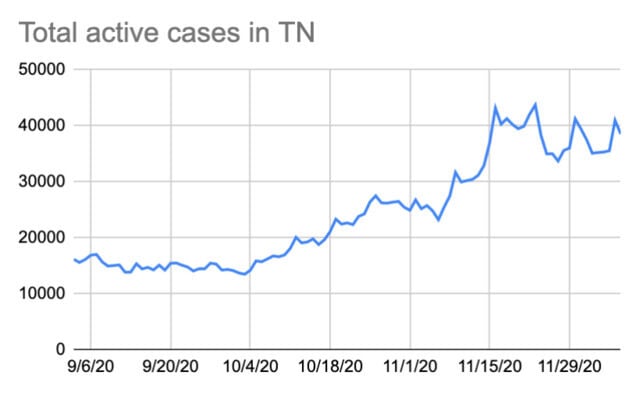 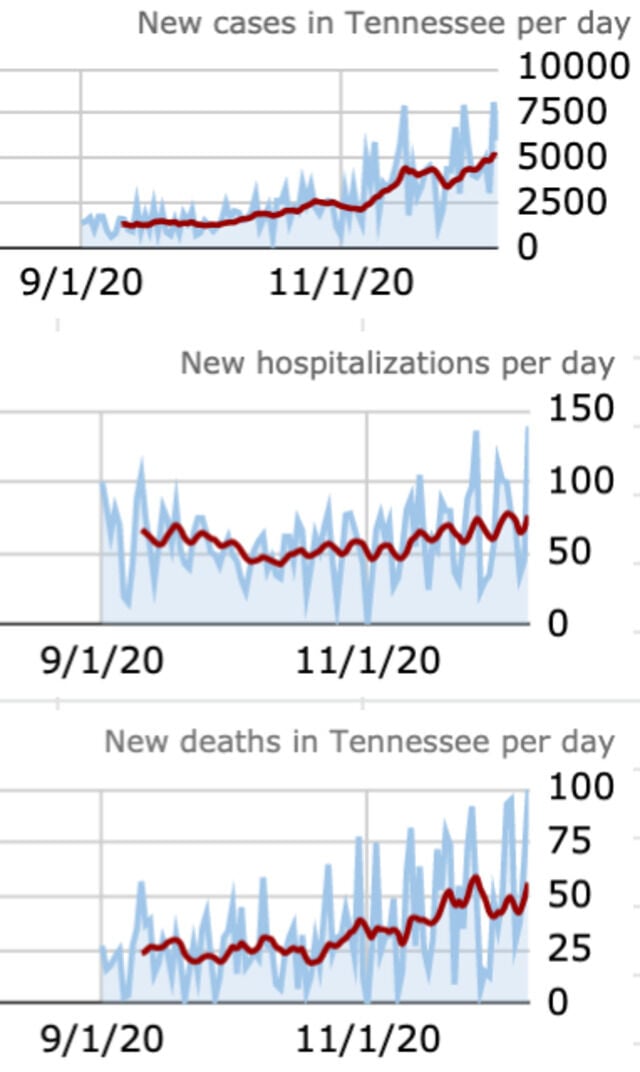 12,804 is the new number of overall cases in the county since the pandemic's start, with 968 of those cases active as that number falls under 1,000.

11,748 people in Williamson have either recovered or had their cases deemed inactive, and 88 have died.

The number of active cases in Tennessee has fluctuated during the past two weeks due to delayed reporting from the Thanksgiving holiday and backlogs at labs. On Tuesday, officials said 38,477 individuals around the state are currently infected with COVID.

The number of patients hospitalized with the disease in the state is at its highest point yet, with more than 2,566 people at 114 hospitals now being treated for a confirmed case of COVID, more the doubling the summer outbreak’s peak. Hospital admissions attributable to the virus have risen 19 percent in the past two weeks.

In terms of capacity, the state reports that 15 percent of inpatient beds (1,772) and 9 percent of ICU beds (189) remain available. Nearly 77 percent of the state's ventilator supply is still available.

Nearly 40 percent of the patients at Saint Thomas Rutherford last week had been admitted for confirmed or suspected cases of COVID-19, according to newly released federal hospital capacity data. Only a handful of beds remain available at the 354-bed hospital.

Saint Thomas Rutherford has the fourth-highest population of COVID patients in the state, ranking alongside facilities — such as Vanderbilt University Medical Center — that are nearly triple in size. Of its 277 adult inpatient beds, the Rutherford hospital reported to the federal government that 254 were occupied on average last week. Of those, 103 were filled with COVID patients.

Rutherford County, much like the rest of the state, is experiencing the highest number of COVID cases and hospitalizations on record. Over the last seven days, the county averaged a positivity rate four times greater than the Centers for Disease Control and Prevention’s safety benchmark and a daily case rate of 78 cases per 100,000 residents. The Tennessee Department of Health reports 338 county residents have been hospitalized with the virus in total.

According to a poll conducted by the Vanderbilt Center for Child Health Policy, only 53 percent of parents in Tennessee reported they would vaccinate their children for COVID when an FDA-approved vaccine comes available.

“We know through this poll that parents have not consistently or universally embraced mask-wearing and many are hesitant to get vaccinated, despite public health organizations, physicians, and officials urging Tennesseans to take steps to limit the spread of the virus,” Stephen Patrick, a neonatologist at Monroe Carell Jr. Children’s Hospital at Vanderbilt and director of the Vanderbilt Center for Child Health Policy, said. “We need to focus on building trust with these parents to keep them and their children safe.”