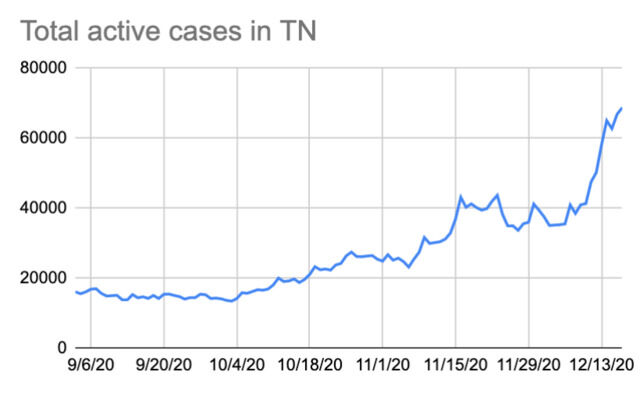 14,786 is the new overall case count for Williamson since the pandemic's start, with 1,613 active cases ongoing.

13,066 people in Williamson have either recovered or had their cases deemed inactive, while 107 deaths have been recorded, up four from the day before.

Of the total number of cases, 5,845 people have died — up 177 from the numbers 24 hours earlier. The latter number is a single-day record for the state by some margin.

The number of active cases in Tennessee has climbed 90 percent in the past two weeks, with officials reporting 68,661 individuals are currently infected with COVID — an all-time high.

The number of patients hospitalized with the disease in the state has increased 17 percent in the past two weeks, with more than 2,897 people across 114 reporting hospitals now being treated for confirmed cases of COVID — another all-time high.

The first person in the state to receive the vaccine candidate developed by Pfizer and BioNTech — which was granted emergency use authorization by the U.S. Food and Drug Administration earlier this week — was a doctor who participated in an early clinical trial but received a placebo. He was unblinded by the study and received his injection late Wednesday afternoon.

Hospitals received their first shipments of the Pfizer vaccine early Thursday morning and began administering them to frontline workers immediately.

Some of the shipments sent by Pfizer inadvertently contained vials with two doses of the vaccine, which Tennessee health officials said increased their stock by nearly 11,000 doses.

By the end of the week, hospitals should have received more than 56,500 doses of the Pfizer vaccine. An additional 56,000 will come by the end of the month, with an emergency use authorization application pending for the Moderna candidate.

The state received its first shipment of the Pfizer vaccine on Monday but held it as an emergency backup in case a hospital’s shipment is damaged or destroyed.