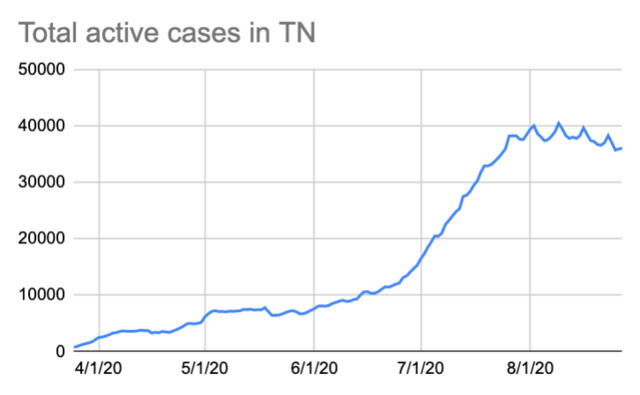 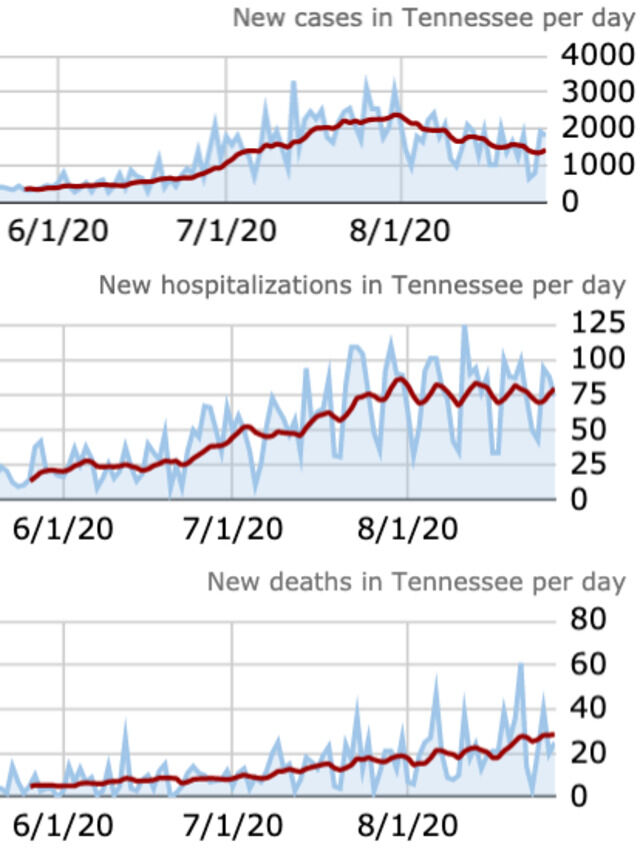 Williamson County saw a bundle of new cases come in on Thursday's report.

The overall number of positive cases for the county stands at 4,260, meaning 50 new cases sprung up in the day's tally.

The number of active cases in Tennessee has begun to trend downward, signaling a slowing of the virus’ spread as testing volumes recover from backlogs and the statewide average positivity rate falls. On Thursday, the state reported 36,090 residents are currently infected with COVID-19.

The number of patients hospitalized with COVID-19 has fallen nearly 20 percent from the figure two weeks ago, with the state reporting 896 people currently hospitalized throughout 106 facilities and making up about 11 percent of all hospitalizations statewide. Another 151 hospitalized individuals are awaiting test results.

In terms of capacity, the state reports that 17 percent of inpatient beds and 18 percent of ICU beds remain available. Nearly 68 percent of the state's ventilator supply — which was low in March until officials acquired about 1,000 more — is still available.

Metro Public Health Department officials reported 137 new cases of COVID-19 since Wednesday, bringing the countywide confirmed case count to 25,485. Of those cases, more than 23,400 people have recovered and 224 people have died.

As of Thursday morning, nearly 15 percent of all inpatient beds and 15 percent of ICU beds in Middle Tennessee were available, both in what public health officials define as “cautionary” levels.

Infections among school-aged children spike 75% in one month

The number of COVID-19 infections in school-aged children has jumped nearly 75 percent in the past month as schools navigate in-class learning amid a stabilizing outbreak in Tennessee.

According to the state department of health, nine schools that initially reopened for the school year have since closed their doors to in-person learning after outbreaks among students and staff members.

Williamson County Schools is phasing back into in-person learning as the month closes, while Metro Nashville Public Schools officials, who began the school year under virtual learning protocols, announced earlier this week they will continue online until at least fall break in October.

Infectious disease experts over the past month have expressed concern about the reopening of schools to in-class learning as the state battled to contain the COVID-19 outbreak. Recent weeks have hinted at a decline in the virus’ spread statewide with a declining number of active cases and hospitalizations, but outbreaks among schools still pose a risk of destabilizing that progress as the nation transitions into flu season.

Despite new COVID-19 testing guidelines passed down by the Centers of Disease Control and Prevention saying asymptomatic testing isn’t necessary, Nashville leaders have committed to continue providing free tests to anyone who wishes to receive one.

“I have no way of knowing why the CDC made that recommendation, but I can tell you the science would run contrary to that,” Meharry Medical College President and infectious disease expert James Hildreth, a member of the county’s Coronavirus Task Force, said in a press briefing on Thursday.

The sudden change in federal guidelines was reportedly the result of directives given by the Trump administration, advising that testing may not be appropriate for people without symptoms even if they’ve been exposed to someone infected with the virus.

Multiple studies, including a brief published in July by the World Health Organization, have confirmed that individuals infected with COVID-19 that do not exhibit symptoms still have the ability to pass the virus on to others. The WHO estimates that nearly 16 percent of all cases are asymptomatic.

In Nashville, Mayor John Cooper announced Thursday that Metro's prohibition on transpotainment will come to an end Sept. 1 and that more capacity will be allowed at bars and ceremonial gatherings.

More than two months after Nashville began mandating masks, the city's rate of new COVID-19 cases has fallen, routinely below 100 per day, and the daily positive test rate is below 10 percent for the first time in months. With that progress, Cooper said bars — which have had capacity capped at 25 people (provided social distancing could be maintained) since reopening earlier this month — can add 25 more drinkers outside. Restaurants will also be allowed to serve customers at bars and counters.

In addition, venues that host weddings, funerals and "similar ceremonies" (these ceremonies were not defined, more on that in a bit) can reopen at one-third capacity or for 125 people. And finally, transpotainment vehicles will be allowed to roll again, albeit at half-capacity and with anyone standing up wearing a mask — which is to say, for better or worse, any woos would be muffled.

Cooper said a new order detailing these changes is being drafted and the final version will address such questions as: "What are 'similar ceremonies'?" and "Will drinking be allowed on pedal taverns or will they simply be mobile traffic-calming devices with no other discernible useful purpose?"