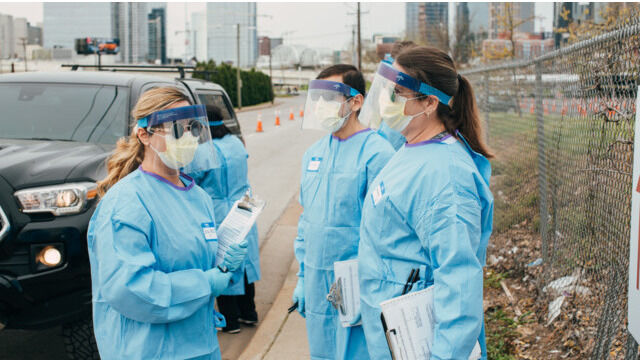 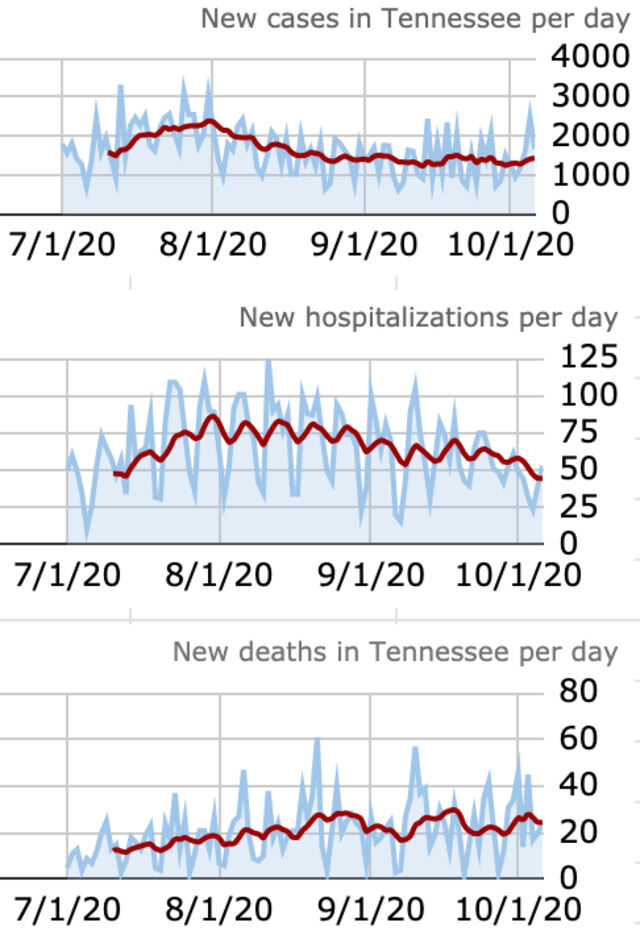 The official number for the county now stands at 5,735, with 520 of those cases active.

5,175 people in that count are either recovered or deemed inactive on state standards, and 40 have died. 71,410 negative tests have been conducted thus far.

Of the total number of cases, 8,976 people have been hospitalized and 2,621 have died — up 53 and 24, respectively, from the numbers 24 hours earlier. More than 3 million tests have now been administered in the state.

The number of active cases in Tennessee continues to fluctuate within a range of 13,000 to 16,000, where they’ve been since the beginning of September after public health officials changed the way they calculate the metric. As of Tuesday, the health department reported 15,728 active cases of COVID throughout the state.

The number of patients hospitalized with COVID across the state has risen 21 percent in the past two weeks, largely driven by the virus infecting older, more rural residents. Nearly 958 people are currently being treated at 110 hospitals; they make up nearly 9 percent of total hospitalizations in the state.

In terms of capacity, the state reports that 17 percent of inpatient beds and 18 percent of ICU beds remain available. Nearly 70 percent of the state's ventilator supply — which was low in March until officials acquired about 1,000 more — is still available.

Tennessee Republican Sen. Marsha Blackburn told reporters Tuesday that Democrats were asking for too much.

“We’re saying, let’s target it, let’s focus it, let’s meet these needs, but let’s be fair to future generations,” she said, citing a desire to “not add to the national debt.”

Meanwhile, House Democrats passed a bill without Republican support that would provide another round of stimulus checks, extend an additional $600 in weekly unemployment benefits and include more funding for schools and COVID-19 testing.

“It’s a travesty that Senate Republicans refuse to even consider a bill to help the American people,” U.S. Rep. Jim Cooper (D-Nashville) said.

House Speaker Nancy Pelosi and Treasury Secretary Steven Mnuchin have discussed a compromise deal but no agreement is yet in place.

President Donald Trump on Tuesday afternoon said he would stop negotiating a compromise.

The federal agency denied the request after a policy change in early September announcing it would no longer pay for safety measures in schools.

Tennessee will have to pay for the funds out of its existing federal COVID-19 relief funds, which have traditionally been used to provide relief to small businesses, nonprofits and unemployment.

WPLN reports Gov. Bill Lee hopes to tap into the state’s congressional delegation to lobby FEMA for the funds.

The Renew Nashville program also comprises the Nashville Business Incubation Center, Pathway Lending, Conexion Americas and the Nashville Area Chamber of Commerce and makes available at no charge a range of programs, workshops and one-on-one advice.

Business leaders can apply here and expect an answer from the group in two business days.

“The toll from the pandemic is challenging at many levels,” said Jane Allen, CEO of the EC. “But if there’s one thing I know about this community, it’s that we come together — we are resilient. We are working together to take the right actions to help our city recover and be better.”