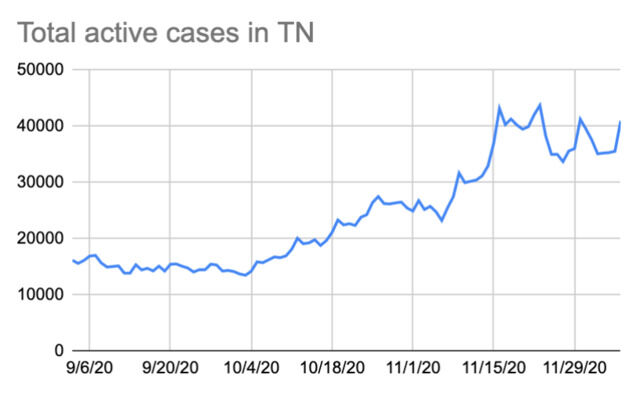 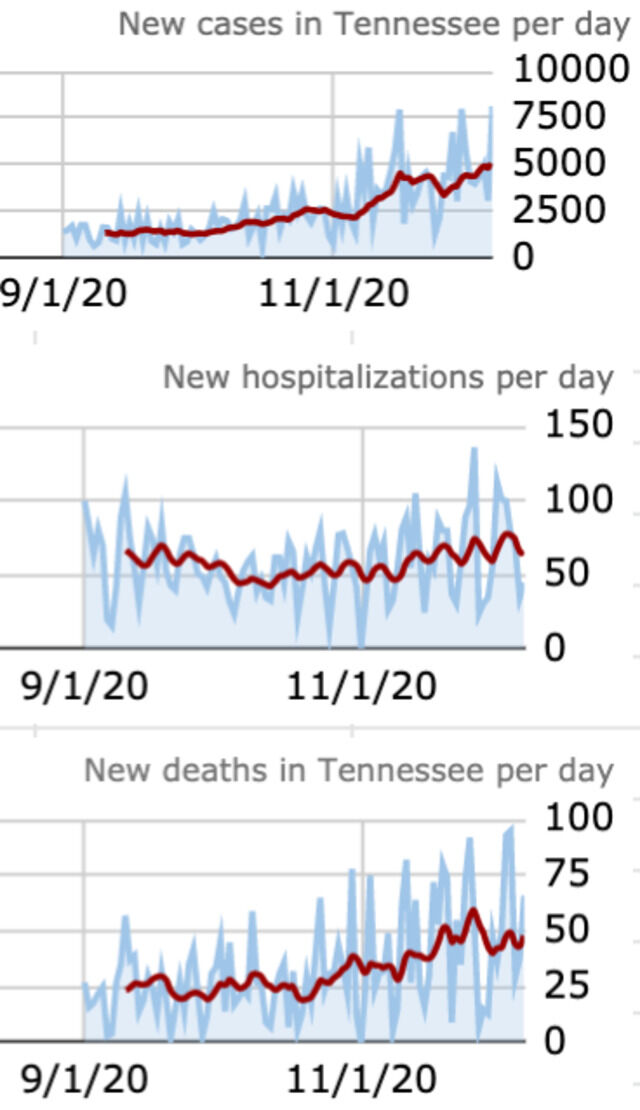 Williamson County saw 402 new cases of coronavirus come in over the weekend as Tennessee hit a grim toll for total pandemic deaths.

As of Monday, 12,638 is the new overall total for cases in the county since the pandemic's start, with 1,024 of those cases active.

11,526 people in Williamson have either recovered from the virus or had their cases deemed inactive, while 88 have now died.

The Tennessee Department of Health has reported a total of 408,730 cases of COVID-19 across the state, up 8,136 cases since Sunday on 24,980 new test results — an 18.7 percent positivity rate. An additional 7,986 cases were reported over the weekend.

The number of active cases in Tennessee has fluctuated during the past two weeks due to delayed reporting from the Thanksgiving holiday and backlogs at labs. On Monday, officials said 40,903 individuals around the state are currently infected with COVID.

The number of patients hospitalized with the disease in the state is at its highest point yet, with more than 2,529 people at 114 hospitals now being treated for a confirmed case of COVID. Hospital admissions attributable to the virus have risen 19 percent in the past two weeks.

In terms of capacity, the state reports that 17 percent of inpatient beds (1,908) and 11 percent of ICU beds (232) remain available. Nearly 77 percent of the state's ventilator supply is still available.

A White House report on the coronavirus in Tennessee last week said nearly every county in the state is experiencing moderate to high levels of transmission of COVID and called on state and local officials to take action to stop the spread.

Compiled by the White House Coronavirus Task Force, the report said the state is experiencing “unmitigated community spread” and that risk of transmission is at a historic high. Among nursing homes in the state, which conduct multiple tests per week, nearly 60 percent reported at least one new case of COVID in a staff member and more than 30 percent report new cases in residents.

The task force said mitigation across the state needs to be strengthened to slow the spread, including implementing a mask mandate in all public spaces, limiting restaurants' indoor capacity to 25 percent and closing bars. Gov. Bill Lee has declined to impose any of these restrictions at a state level, instead granting local municipalities the authority to order a mask mandate.

In Nashville, a mask mandate has been in place since June and restaurant and bar capacities are capped at 50 percent. Nashville Mayor John Cooper also has imposed a 10 p.m. curfew for those businesses and reduced the number of people allowed to gather —  in private or public — to eight.

“If state and local policies do not reflect the seriousness of the current situation, all public health officials must alert the state population directly,” the report said. “It must be made clear that if you are over 65 or have significant health conditions, you should not enter any indoor public spaces where anyone is unmasked due to the immediate risk to your health; you should have groceries and medications delivered.”