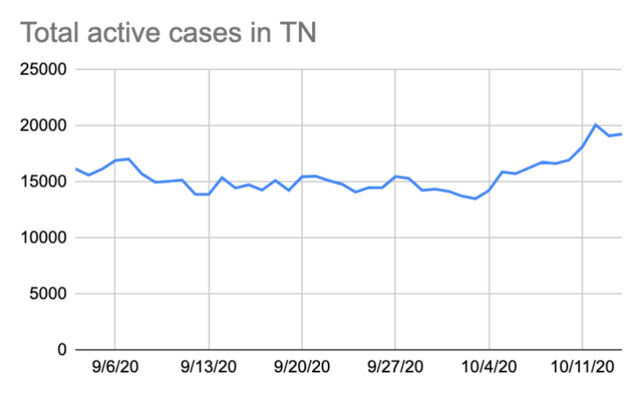 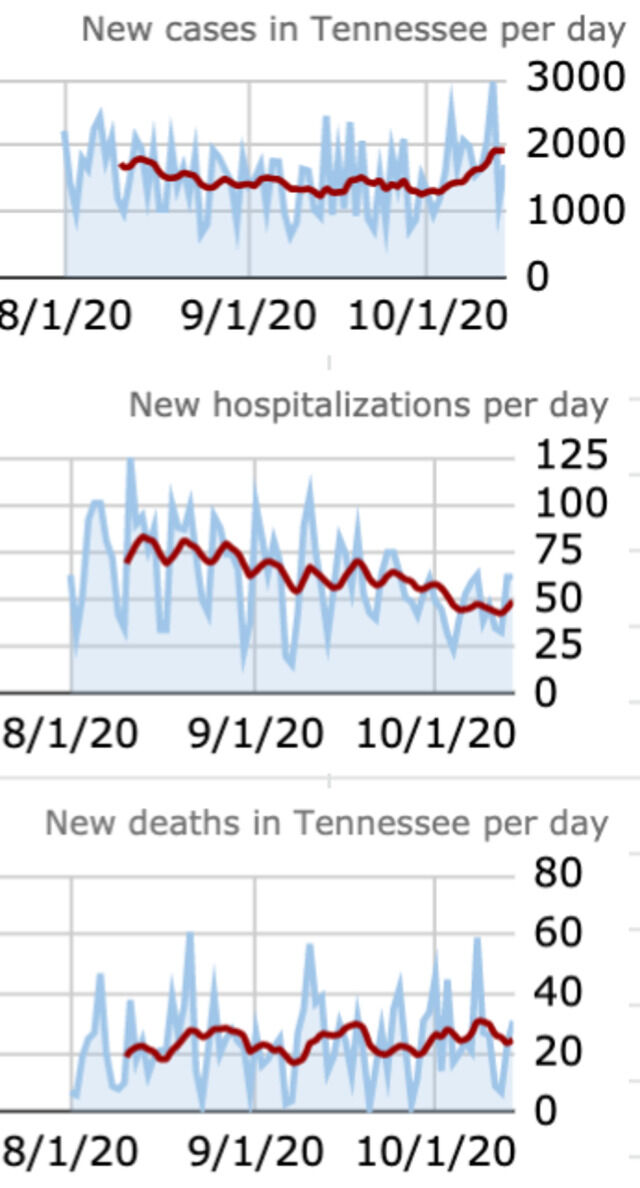 6,194 is the new number of overall cases for the county, with 620 of those cases considered active.

5,527 people in the county have either recovered or had their cases labeled inactive, while 47 people have died of the virus. 77,568 negative tests have been conducted this far.

Of the total number of cases, 9,371 people have been hospitalized and 2,828 have died — up 62 and 31, respectively, from the numbers 24 hours earlier. More than 3.2 million tests have now been administered in the state.

The number of active cases in Tennessee has risen 34 percent from the number two weeks ago, with the state reporting 19,245 people currently infected with COVID-19.

The increase has been largely driven by the virus infecting older, more rural residents. The department of health reports nearly 1,101 people are currently being treated at 110 hospitals; they make up more than 9 percent of total hospitalizations in the state. The new tally is approximately 50 patients shy of the state’s all-time high set in July.

In terms of capacity, the state reports that 17 percent of inpatient beds and 12 percent of ICU beds remain available. Nearly 70 percent of the state's ventilator supply — which was low in March until officials acquired about 1,000 more — is still available.

Older adults living in rural areas across Tennessee are continuing to fall ill after being infected with COVID-19, driving the recent increases in the number of patients hospitalized across the state, according to new data released by Vanderbilt University researchers.

The case mix index has increased nearly 32 percent in Tennessee’s non-metro counties in the past few weeks, showing that as the outbreak exceeds levels recorded in July in those areas, those infections are occurring more frequently in older populations with a higher likelihood of falling ill or dying. This is reflected in the state’s recent COVID-19 hospital admissions data, which has seen an increase of more than 30 percent in the past two weeks.

“Statewide, Tennessee is nearly back to its highest number hospitalized from late July. And some areas of the state—notably East Tennessee and the Upper Cumberland area—are seeing their highest number hospitalized to date,” the Vanderbilt University Department of Health Policy tweeted on Wednesday. “This trend is concerning, and bears close monitoring by public health leaders and policymakers.”

Hospitals in rural areas of the state are less equipped to handle large COVID-19 outbreaks because they have fewer resources per their population. As the nation transitions into flu season, rural outbreaks could threaten bed capacity in local facilities, thus spilling patients over into other county hospitals, including Davidson County, which serves as a health care hub for all of Middle Tennessee.