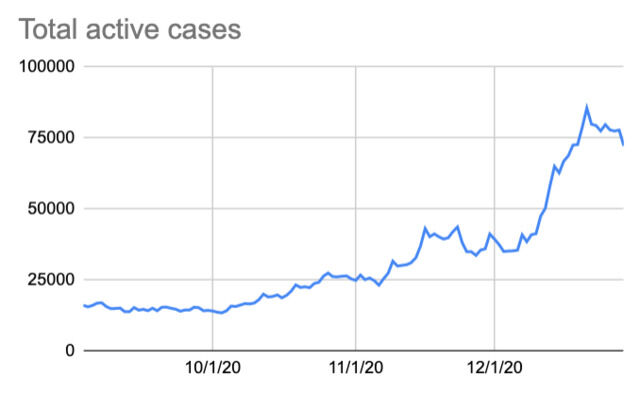 Williamson County saw a high increase of COVID-19 cases Wednesday as 2020 begins to come to a close.

316 new cases were added to the overall total for the county of cases since the pandemic started, now at 17,681. 2,304 of those cases are active.

15,255 people have either recovered or had their cases deemed inactive, and 122 have now died.

The number of active cases in Tennessee has increased 15 percent in the past two weeks, with officials reporting that 72,136 individuals are currently infected with COVID. The state reported 50 percent fewer tests on average last week than in previous weeks due to the holidays.

The number of patients hospitalized with the disease in the state has climbed 12 percent in the past two weeks. More than 3,212 people at 114 hospitals are now being treated for confirmed cases of COVID — an all-time high.

Individuals in Tennessee who staff schools and child care centers will receive the COVID-19 vaccine after health care workers, according to a revised vaccination plan released by the state Wednesday.

Teachers and child care workers, including staff for elementary, middle and high schools, have been bumped up by state officials to participate in the next phase of vaccinations, alongside first responders and people aged 75 years and older.

Thirty-five counties in the state have already completed their first phase of vaccines and began vaccinating first responders, non-frontline health care workers and people older than 75. The state plans to launch a vaccine dashboard that will inform residents if they are eligible to receive the shot according to the state’s phases. On Wednesday, Health Commissioner Lisa Piercey said she has received “isolated reports” of counties providing vaccines to people not yet eligible.

“We are strongly encouraging folks, including your own health department, to go by the phases,” Piercey said in a call with reporters. “We are pretty focused on an appointment system because that allows us to triage, if you will, patients when they call to make sure the are in an appropriate phase.”