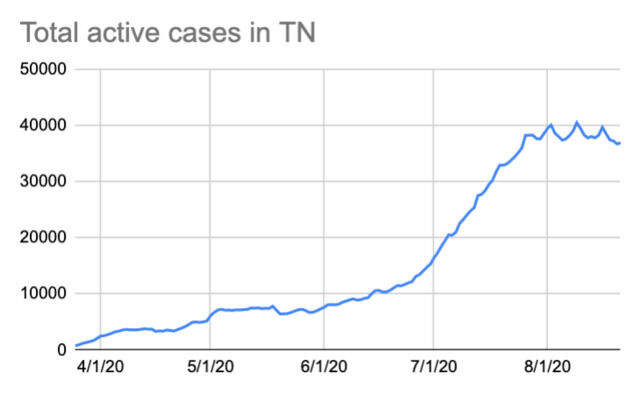 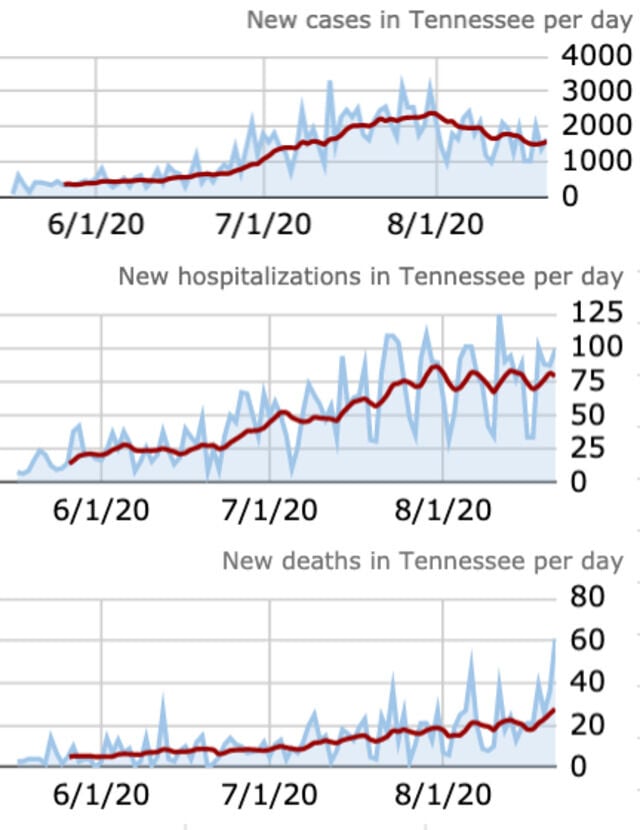 27 people have died, and 47,131 negative tests have been processed.

Of the total cases, 102,686 people have recovered, 6,255 have been hospitalized and 1,549 have died — up 1,719, 99 and 61, respectively, from the numbers 24 hours earlier. Friday marked the highest number of deaths the state has reported in one day since the start of the pandemic.

The number of active cases in Tennessee has remained relatively flat in the past two weeks, signaling a slowing of the virus’ spread as testing volumes recover from backlogs and the statewide positivity rate incrementally drops. On Friday, the state reported 36,609 residents are currently infected with COVID-19.

The number of patients hospitalized with COVID-19 has fallen nearly 10 percent from the figure two weeks ago, with the state reporting 965 people currently hospitalized throughout 104 facilities and making up about 11 percent of all hospitalizations statewide. Another 184 hospitalized individuals are awaiting test results.

In terms of capacity, the state reports that 17 percent of inpatient beds and 16 percent of ICU beds remain available. Nearly 67 percent of the state's ventilator supply — which was low in March until officials acquired about 1,000 more — is still available.

Vanderbilt University Medical Center announced Friday it has been awarded a one-year, $34-million grant from the National Center for Advancing Translational Sciences related to COVID-19.

The center, a part of the National Institutes of Health, is providing the grant in an effort to conduct a nationwide study of “convalescent plasma” as a treatment for the coronavirus, according to a release. The trial will test whether infusions of the plasma, the liquid part of blood collected from COVID survivors, can help other hospitalized patients with the disease. The plasma contains antibodies against SARS-CoV-2, the virus that causes COVID.

VUMC’s Dr. Todd Rice and Dr. Wesley Self will lead the study, which will recruit 1,000 participants at about 51 sites across the country. The goal is to complete enrollment by Oct. 31 and report results by November.

“As doctors, we continue to lack adequate therapies to treat patients with COVID-19,” Rice, associate professor of medicine and director of VUMC’s Medical Intensive Care Unit, said in the release. “Convalescent plasma could offer promise, but we must answer this question rigorously in a randomized trial, especially for the sickest patients at increased risk of mortality.”

Gov. Bill Lee and Tennessee Bureau of Investigation Director David Rausch on Thursday warned of a reported increase in cybercrimes committed against children, a trend they attributed to an increase in internet use related to the pandemic.

So far this year, the TBI has logged 450 cyber tips, which according to Rausch is “quite an increase.”

“With more young people on the internet it opens a large door for potential bad actors,” he said.

The agency has reallocated special agents from other units to focus on the trend, he said. Additionally, the TBI is working with the state Department of Education on a response plan.

In yet another pivot, Gov. Bill Lee and Health Commissioner Lisa Piercey said Thursday that they are seeking permission from federal authorities to share school-level data related to COVID outbreaks.

Initially, the administration balked at sharing the information, citing privacy concerns. State officials later said they would share the information before backing off again earlier this week.

“We want to make sure we’re crystal clear on what is and is not allowed for our state before we do that,” Piercey said.

So far, the state has released county-level data about school-aged children who’ve contracted the disease but have not released numbers from specific schools as some parents have called for. Some school districts are proactively releasing the information, though state leaders have said federal privacy laws prevent them from doing so.