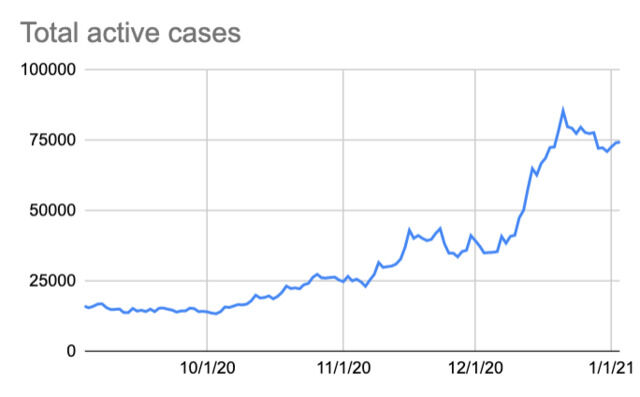 Williamson County COVID-19 cases have grown by more than a thousand since just before the new year.

16,191 people in Williamson have either recovered or had their cases deemed inactive, and 128 have now died.

The Tennessee Department of Health has reported a total of 612,250 cases of COVID-19 across the state, up 3,953 cases since Sunday on 14,598 new test results — a 22 percent positivity rate. Over the extended holiday weekend, the state reported an additional 35,708 cases and 315 deaths.

The number of recorded active cases in Tennessee has dropped in the past two weeks as testing declines due the holidays but while the statewide positivity rate continues to climb. On Sunday, state health officials reported that 74,588 individuals are currently infected with COVID.

The number of patients hospitalized with the disease in the state has climbed 16 percent in the past two weeks. More than 3,213 people at 114 hospitals are now being treated for confirmed cases of COVID.

Meharry will serve as one of the 100 hubs across the United States and Mexico testing the vaccine candidate — which was made using purified spike proteins from the novel coronavirus — in up to 30,000 volunteers.

Novavax received $1.6 billion in funding from the federal government as a part of Operation Warp Speed.