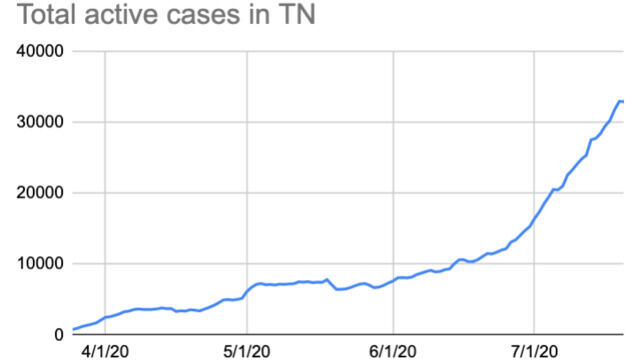 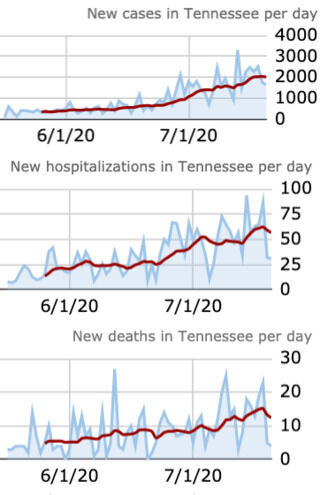 Williamson County has seen a dip in its number of new COVID-19 cases Tuesday as compared to recent reports.

Only 37 new positive results showed on the Tennessee Department of Health's daily report, with cases now standing at 2,599 overall.

18 people have died, and 31,725 negative tests have been conducted.

The number of active cases in Tennessee has risen 47 percent in the past two weeks, a slightly slower rate of growth than a few weeks ago. On Tuesday, the state reported an all-time high of 33,221 residents currently infected with the virus.

The number of patients hospitalized with COVID-19 has risen more than 33 percent in the past two weeks with 1,038 people hospitalized throughout 104 facilities statewide. The state surpassed 1,000 patients currently hospitalized due to COVID-19 on Saturday but due to regular data collection delays were unable to report it until today.

In terms of capacity, the state reports that 20 percent of inpatient beds and 19 percent of ICU beds remain available. Nearly 67 percent of the state's ventilator supply — which was low in March until officials acquired about 1,000 more — is still available.

Gov. Bill Lee is distributing nearly $265 million in federal CARES Act funding to nonprofits and local municipalities, not including Davidson or Shelby counties.

The Financial Stimulus Accountability Group, a bipartisan group assembled to allocate financial aid provided by the federal government for COVID-19 responses, on Tuesday announced that $150 million will be sent to nonprofits across the state. Organizations supporting students, people experiencing economic insecurity, community health, individuals with disabilities, businesses, among others, will be prioritized for aid.

The Department of Human Services is seeking to partner with local nonprofits to help administer the grants starting Aug. 1. Grant applications are due Thursday.

On Monday, Lee announced $115 million in CARES Act funding would also be distributed to local governments — excluding Davidson and Shelby counties, who together make up 41 percent of the state’s overall infections but received their own portions of federal funding earlier this year — to offset costs incurred from the pandemic.