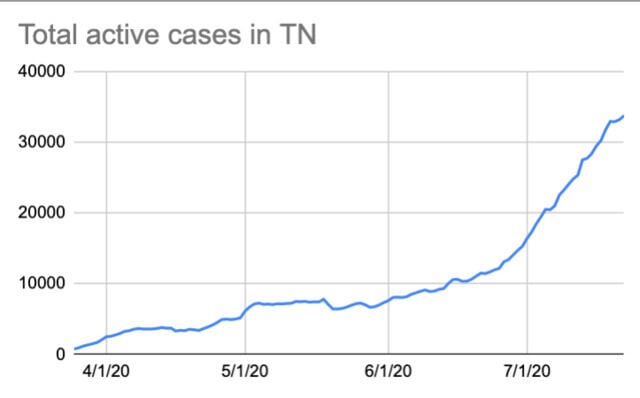 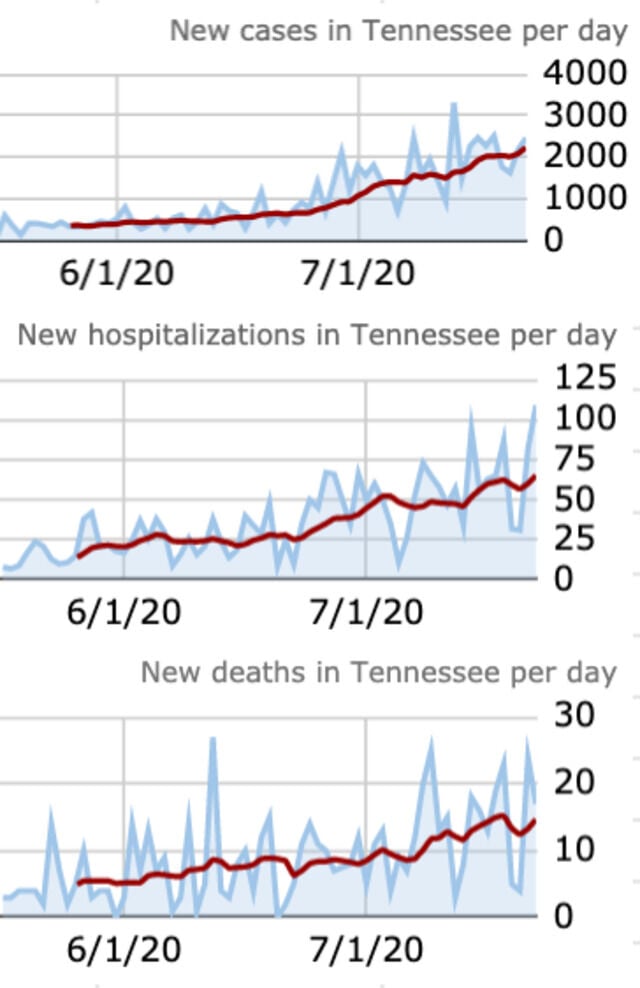 Williamson County saw another day of lower COVID-19 positive cases than in the past few weeks prior.

Only 49 new cases were recorded by the state Wednesday, with the overall tally in Williamson now up to 2,648 overall. A 19th death was noted as well.

31,717 negative tests have been conducted thus far in the county.

The number of active cases in Tennessee has risen 45 percent in the past two weeks, a slightly slower rate of growth than a few weeks ago. On Wednesday, the state reported an all-time high of 33,781 residents currently infected with the virus.

The number of patients hospitalized with COVID-19 has risen more than 28 percent in the past two weeks with 1,059 people hospitalized throughout 103 facilities statewide. Another 392 individuals hospitalized are awaiting test results.

In terms of capacity, the state reports that 19 percent of inpatient beds and 16 percent of ICU beds remain available. Nearly 67 percent of the state's ventilator supply — which was low in March until officials acquired about 1,000 more — is still available.

The local toxicology laboratory owned by American Addiction Centers has added its resources to the region’s COVID-19 testing capacity. The company said Wednesday that its Brentwood lab at 500 Wilson Pike Circle can administer tests weekdays from 8 a.m. to 4 p.m. and promises turnaround times of between 24 hours and the end of the following day.

The Addiction Labs team also has the ability to conduct on-site testing at businesses, schools, gyms and other venues for groups of at least 20 people. People looking to get tests are required to wear a face mask and bring a copy of their insurance card and photo ID. (The company says it will work with people without insurance to use a government-provided portal to cover costs.) Tests conducted with a doctor’s order are free.

“Our test looks at three gene targets where other tests may only look at one gene target,” said Dr. Mark Calarco, Addiction Labs CEO. “This means fewer false negatives, which can reduce the spread of the virus by someone who believes they don’t have it.”

White House Coronavirus Task Force leader Deborah Birx on Wednesday said outbreaks of COVID-19 that have taken over the South are beginning to spread throughout Tennessee and placed Nashville on a list of 11 cities that need to take aggressive action to stem the spread of the virus.

Birx said it is critical these areas — other cities listed include Baltimore, New Orleans, Indianapolis and St. Louis — take up evidence-based mitigation strategies, such as ordering mask mandates and ensuring social distancing, or face surges in new cases similar to what has stretched hospital capacity limitations like in some areas of Texas and Florida.

She said the biggest indicator to needing to take stronger action against the virus is a deviation in the region’s positivity rate. Nashville’s positivity rate has grown to up to 17 percent in the past month as testing increases across the county, helping lift the overall positivity rate to 12.2 percent.

“When you first see that increase in test positivity, that is when to start the mitigation efforts,” she said in an audio recording obtained by Public Integrity. “I know it may look small and you may say, ‘That only went from 5 to 5-and-a-half [percent], and we’re gonna wait and see what happens.’ If you wait another three or four or even five days, you’ll start to see a dramatic increase in cases.”

Tennessee Secretary of State Tre Hargett told a U.S. Senate committee that he is optimistic about the ability of election officials across the state to safely conduct this year’s elections as the coronavirus continues to spread.

While many states have moved to mass mail-in voting — both permanently and in response to the pandemic — Hargett and other Tennessee leaders have pushed back on that idea. Hargett said that Tennessee voters “love to cast a ballot in person.”

Since early voting for the Aug. 6 primaries started last week, Hargett said he has visited election sites in 10 counties and plans to visit more this week. He applauded work by local officials to distribute protective equipment and sanitize touchpoints at polling places.

The secretary of state thanked the senators for election assistance funds previously allocated and asked that any future funds be distributed with no strings attached.

“It would not be appropriate, nor do we need to federalize, the administration of our elections,” Hargett said. “One size does not fit all when it comes to elections.”

Though a state judge required Tennessee election officials to expand absentee voting during the pandemic, a federal judge recently declined to block state laws that place restrictions on how people can vote by mail in Tennessee.

Despite the state court's order, Hargett confirmed that his office does not consider "fear of contracting coronavirus" a valid excuse for absentee voting, to which Maine Sen. Angus King said, "That's pitiful."