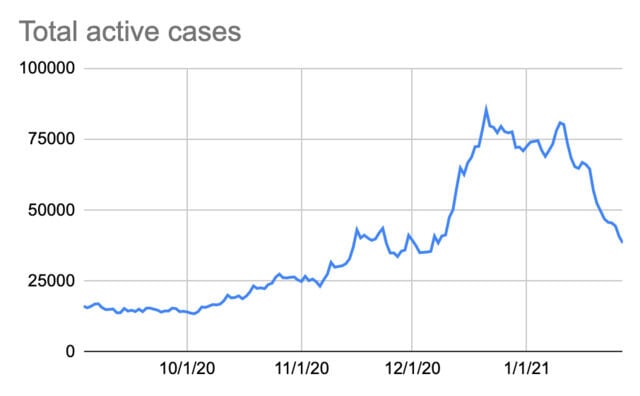 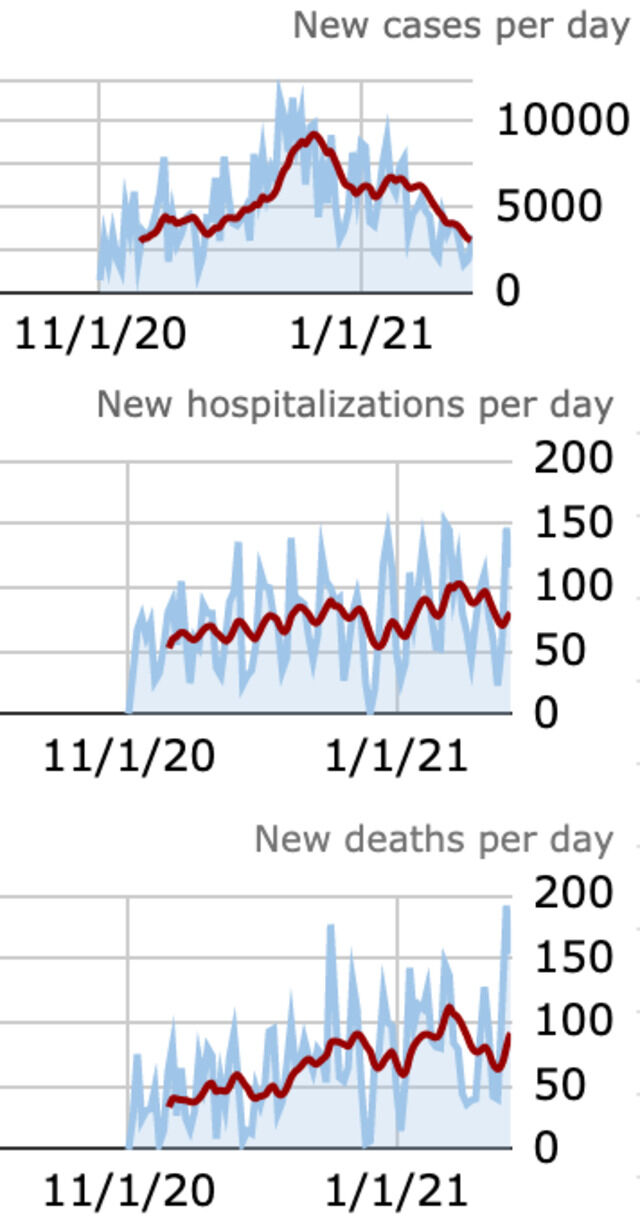 Only 60 new cases were reported on the daily total, with the county's overall count now standing at 22,593 since the pandemic's start.

1,352 of those cases are considered active.

More troubling is the county's death toll which has seen 16 people added to the overall count of 170 since Tuesday. 12 people were reported deceased on Wednesday and another four were reported on Thursday.

21,071 people in Williamson have either recovered or had their cases deemed inactive.

The number of active cases has fallen 45 percent in the past two weeks. On Tuesday, state health officials reported that 38,469 individuals are actively infected with COVID-19.

The number of patients hospitalized with the disease in the state has fallen 34 percent in two weeks, with 1,857 people at 114 hospitals now being treated for confirmed COVID.

In terms of capacity, the state reports that 13 percent of inpatient beds (1,562) and 10 percent of ICU beds (201) remain available. Nearly 73 percent of the state's ventilator supply is still available.

Nashville Mayor John Cooper on Thursday announced the city will push back to midnight a curfew imposed on bars and restaurants that serve alcohol, effective next week.

The curfew had been 11 p.m. Restaurants that do not serve alcohol will be able to resume regular business hours.

Although social distancing rules and a countywide mask mandate are still in place, city officials said the relaxing of restrictions come as the COVID-19 outbreak weakens and as schools look to resume in-person learning.

Asked whether there is concern that relaxing virus mitigation efforts could undo recent progress as new variants of the virus spread, a representative with the health department said:

“There are currently about three variants running around the country right now but none have been identified in Nashville. There have been a few in Tennessee, however. We are continuing to monitor that. So, it’s more important than ever to be social distancing and wearing masks and all of that stuff. As of now, we are unaffected but we have considered that and the orders that we are putting in place can be changed if we are starting to have some issues but we think we can safely reopen based on how the immunization and actual previous infections have gone in the county.”

Music City Center to be used as mass vaccination site

City officials on Thursday announced plans to use the Music City Center as a mass vaccination site.

The Metro Public Health Department will transfer operations from the health center and a vaccine clinic in East Nashville to the convention center this weekend.

Davidson County is still in the first phases of the vaccine rollout. That covers vaccinating health care workers, first responders and people aged 75 and over by appointment only.

Cooper has set a goal to administer 1,000 doses daily at the site, and as supply increases over time, to scale the operation threefold. As of Thursday morning, the health department reported having fully vaccinated approximately 40,000 people — less than six percent of the population.