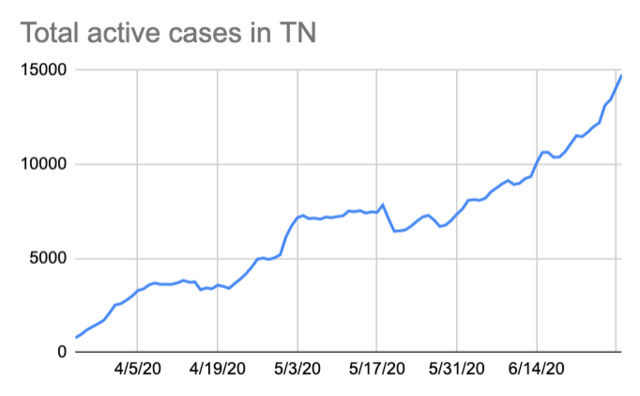 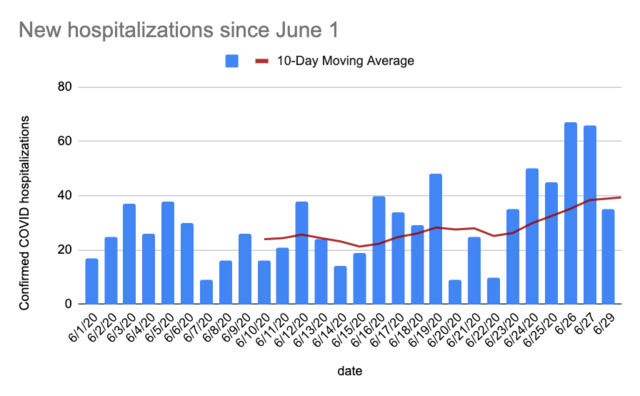 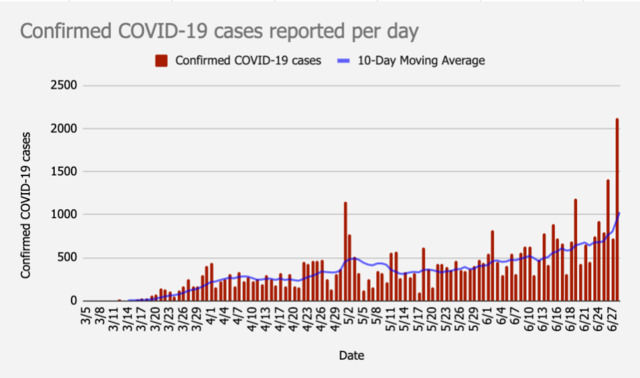 The Tennessee Department of Health also reported that Williamson County currently has 1,001 positive cases, with 498 of those being active cases. The county reported more than 30 case increases per day for the past three days.

“We would like to remind the community that if they are coming to receive a test, they should plan on self-isolating until their test results come back to prevent transmission if results are positive,” said Williamson County Health Director Cathy Montgomery, “With the number of tests increasing, we will naturally see the number of positive cases increase as well.”

The number of active cases in Tennessee continues to rise. On Monday, the state reported another all-time high of 14,743 residents currently infected with the virus.

The new data consists of results from the last two days due to a delay in reporting after a component of the national virus surveillance system was overloaded and shut down early Sunday morning, which lasted nearly nine hours.

“Due to an extremely high volume of both COVID-19 and other laboratory test results being reported, there have been recent intermittent backlogs of labs in queue to be imported into the NBS system. This issue is not unique to Tennessee and is affecting all NBS jurisdictions. The TDH team has been working closely with the NBS vendor and Tennessee State Government information technology support to quickly implement fixes that have been identified,” a department spokesperson wrote in a press release.

Gov. Bill Lee on Monday signed three executive orders, including one that extends his declared state of emergency set to expire later this week through Aug. 29.

Regulations related to to-go alcohol, local governments meeting by teleconference and telemedicine are among the long list of loosened restrictions extended through Aug. 29.

Though the governor has encouraged Tennesseans to patronize reopened local businesses, his extended order “urge[s] Tennesseans to continue limiting activity and staying home where possible.” It also urges residents to use face coverings when in close proximity to others and work from home if possible.

Where to get tested in Williamson County

Starting today, people can get tested for COVID-19 and pick up masks at the Williamson County Agricultural Center from 8:30 a.m. to 12:30 p.m. Monday through Friday.

The testing site will be closed on July 3 for Independence Day, according to a release from the Williamson County Health Department.

Other COVID-19 testing sites in and around Williamson County can be found at the following link: https://www.tn.gov/health/cedep/ncov/remote-assessment-sites.html

COVID-19 tests and masks are free, regardless of county of residency. Individuals do not have to present symptoms to be tested. Test results are currently being provided within four to seven days of testing.

The health department also reiterated the need to wear a mask in public settings and to physically distance yourself from other people when in public.

Businesses should continue to follow Governor Lee’s Tennessee Pledge Guidelines which can be found here: https://www.tn.gov/governor/covid-19/economic-recovery.html