The details of Tennessee's proposed new school funding formula are out. If accepted, the new formula will replace the one the state has been using for 30 years.

The Tennessee Investment in Student Achievement Act was designed following three months of public feedback to find a replacement for the Basic Education Program funding formula, and following that was developed for another month.

The funding formula will now be introduced to the Tennessee General Assembly and be reviewed by seven committees before being voted on by the state House and the Senate. If adopted, the TISA Act we be incorporated beginning with the 2023-2024 school year.

Expanding on the draft that was released in January, the details of the TISA Act dive into how much money districts across the state will receive to fund their students. According to Tennessee Department of Education Commissioner Penny Schwinn, the TISA Act is designed to address reading proficiency by third grade, prepare students for higher education or career and technical education, and “provide each student with the resources needed to succeed, regardless of the student’s individual circumstances.”

One of the biggest demands for public education funding was more money — Tennessee currently ranks among the bottom states in the nation when it comes to per-pupil investment. Gov. Bill Lee announced his intention to inject more money into education during this year’s State of the State address, including $1 billion in recurring education funds, $750 million of which will be allocated to the new funding formula. The TISA formula will provide more funding to schools than the BEP, assuming stable enrollment. “If you are a district that has lost 10 to 15 percent of your students, the formula cannot account for that,” says Schwinn.

The TISA formula would include a total of $9 billion of combined state and local funding for the year 2024. This includes $1 billion in new recurring funding, with $250 million slated for 2023 and $750 million for 2024. An additional $750 million in one-time funding will be dispersed in 2023.

Regarding local contributions, the state will cover 70 percent, and starting in fiscal year 2027, local districts must begin contributing 30 percent. Schwinn notes that local contributions won’t change much compared to what districts typically pay under the current BEP formula. She also notes that “under the TISA, we have added state funding without increasing taxes. That is really important for locals, to ensure that this is a formula that people can afford.”

The formula has several sections, including base funding, student weights, direct funding and outcomes rewards.

The base, made up of $6.6 billion, includes all aspects funded in the BEP plus additional dollars for teacher salaries and increased staff positions like nurses and school counselors. The base also includes money for technology school safety.

Each student will receive a base funding of $6,860, and then receive additional weights depending on their specific needs. The weights include:

There are 10 different kinds of unique learning needs, which include “different tiers” of English learners, students with dyslexia and students who are gifted and disabled. These weights can be layered, meaning that students can receive extra funding for all the different aspects they qualify for.

When it comes to weights for charter schools, Schwinn says: “The actual percent weight does not add any more than what is already there. We tried to keep that as consistent as possible and allow the General Assembly to have that conversation.”

The direct funding aspect is covered entirely by the state, with $376 million dispersed across a few different areas. Every K-3 student gets an extra $500 to focus on literacy. Additionally, districts will receive another $500 for students who qualify for summer school and tutoring under the Learning Loss and Student Acceleration Act, or third-graders who score below efficiency on the state TCAP exams. Fourth-graders receiving that tutoring would also receive that direct funding. There are also dollars allocated for CTE and higher-education support, including $185 for students to take and retake the ACT and an average of $5,000 per student for CTE and post-secondary education.

The outcomes aspect of the formula would allocate $100 million in bonuses for individual students who “demonstrate success and learning to read and college and career readiness,” and additional bonuses for those who do so and are economically disadvantaged. This includes bonuses for third-graders who are proficient in the TCAP and high schoolers who demonstrate college readiness through ACT performance and for those who earn tier-two or tier-three industry credentials. Districts are not responsible for outcomes bonuses.

Though it’s not an aspect of the TISA formula, fast-growing districts (or those with 2 percent growth from the year before) will get stipends to help fund the additional students. There is another stipend for fast-growing infrastructure — districts that grow 2 percent or more for three consecutive years may get additional dollars.

A portion of the formula also addresses teacher salaries. “If we are on the same track for teacher increases as we have been and expect, we may be — pending, obviously, proposals and approvals by our branches of government — we would start at $35,000 as the minimum salary in 2019," says Schwinn. "We would be on track to be close to $45,000 by 2026.” These raises must go to existing teachers, meaning those who are evaluated in the The Tennessee Educator Acceleration Model system. If salaries rise in the funding formula, state salary schedules must also increase.

If this formula legislation is passed, there will be a yearly review process for districts’ fiscal capacity, which will be established by the state’s Center for Business and Economic Research, reviewed by the comptroller and evaluated by the Tennessee Board of Education. Grants will be available to help struggling districts maintain some of the costs associated with this.

The formula also has policies surrounding transparency and accountability. Local school boards must report academic goals that describe their allocation of dollars, and they must also report results on those goals the next year. Low-performing public and charter schools may be asked to present to an ad hoc education finance committee, which could lead to corrective action plans or comptroller inspections. Additionally, schools and districts must publicly report their use of funds. Districts will also be able to provide yearly input including what they’d like to see funded and potential return on investments. The department of education must provide a yearly report that includes academic analyses, accountability report cards, district TISA review requests and comptroller review of the TISA.

Professional development will be provided to allow districts to receive training surrounding the TISA Act, and those involved in budgeting processes will be required to take an assessment to demonstrate their knowledge. Optional trainings will be available to school employees as well.

“We want to make sure districts and schools are empowered with flexibility,” says Schwinn. “So again, this is a funding plan, it is not a spending plan, so that [districts] can meet the needs of their unique populations.” 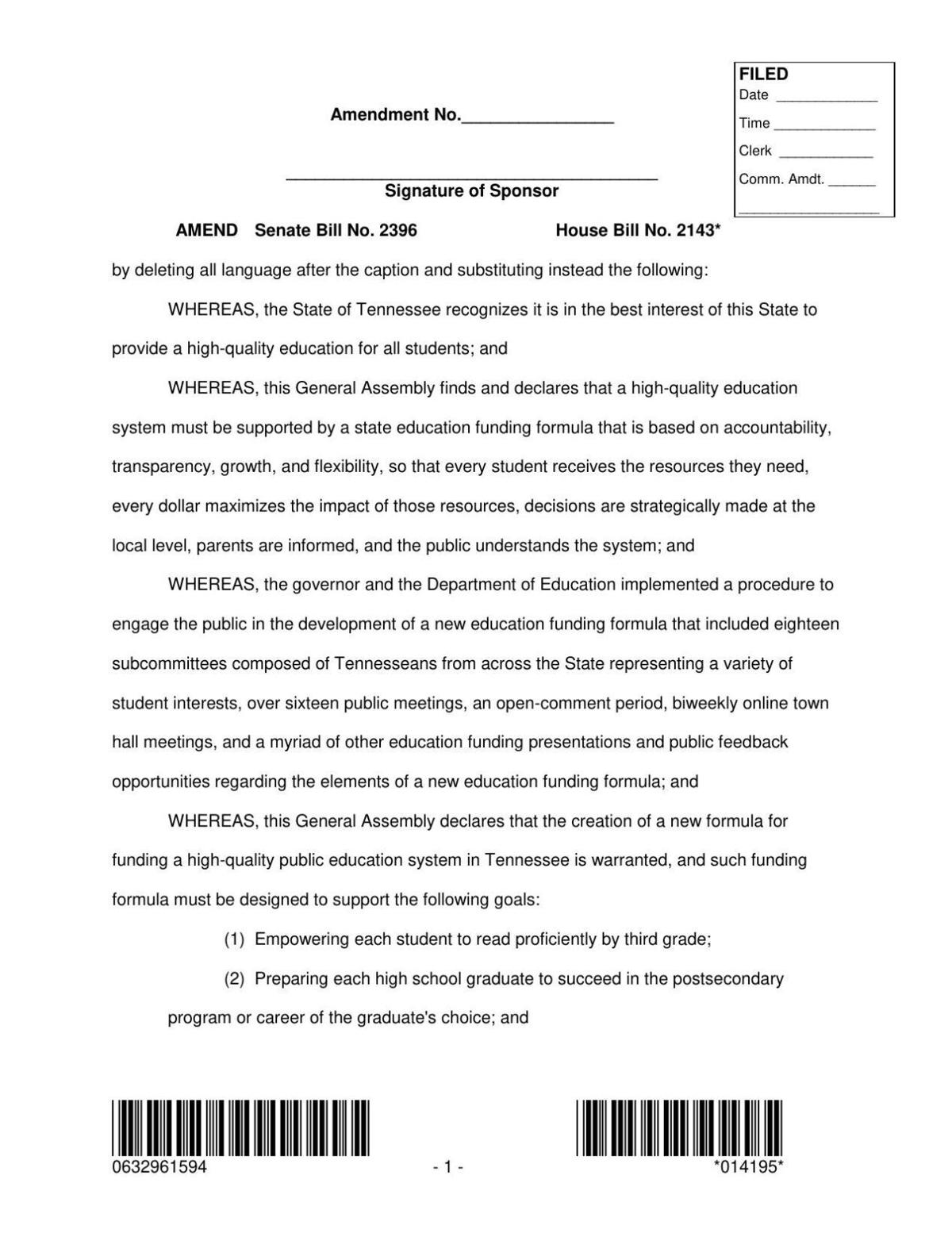