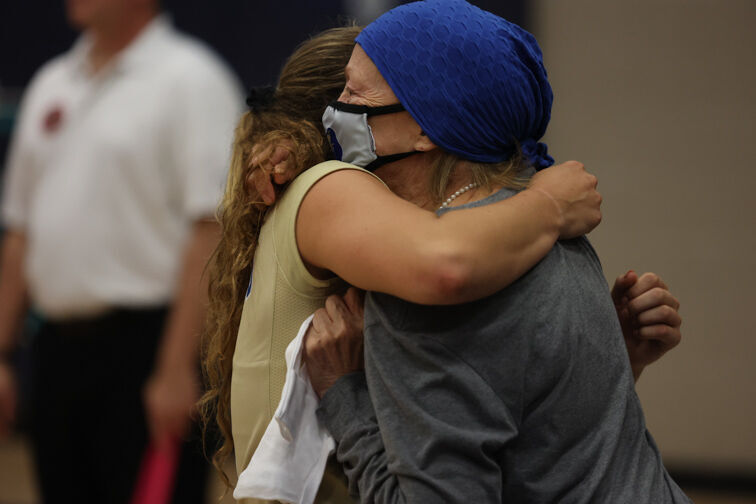 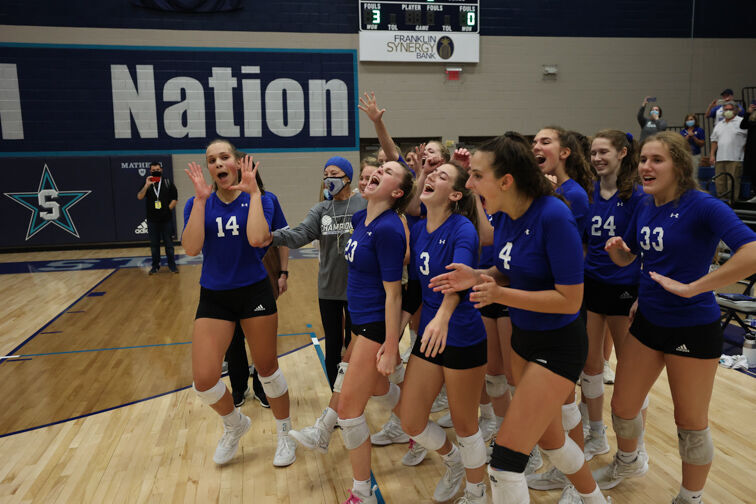 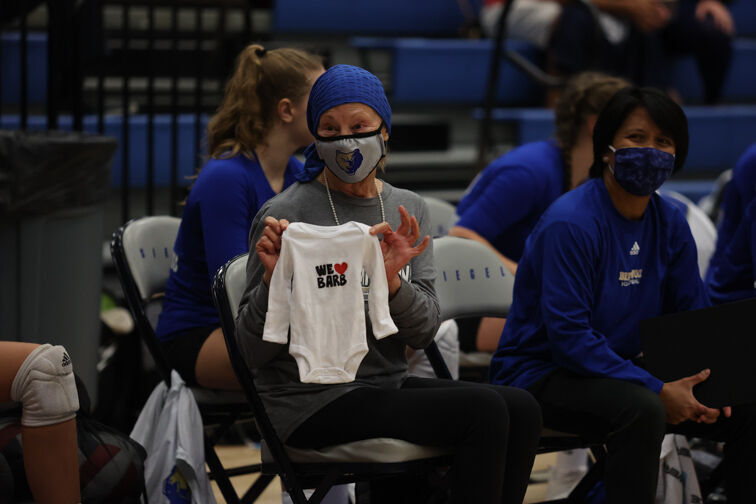 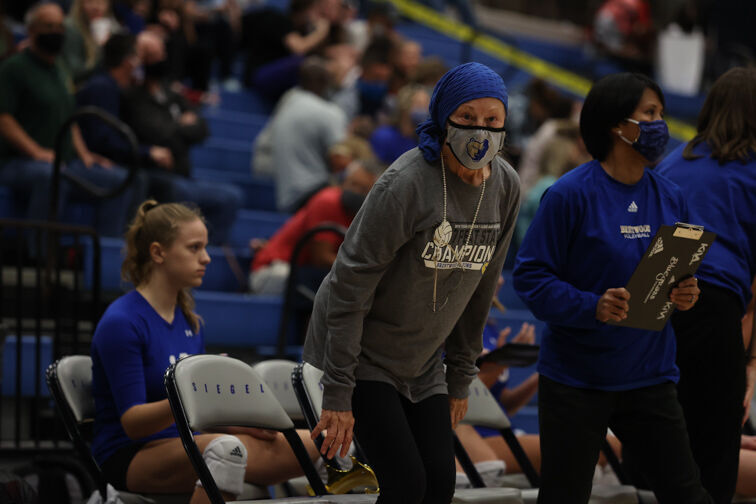 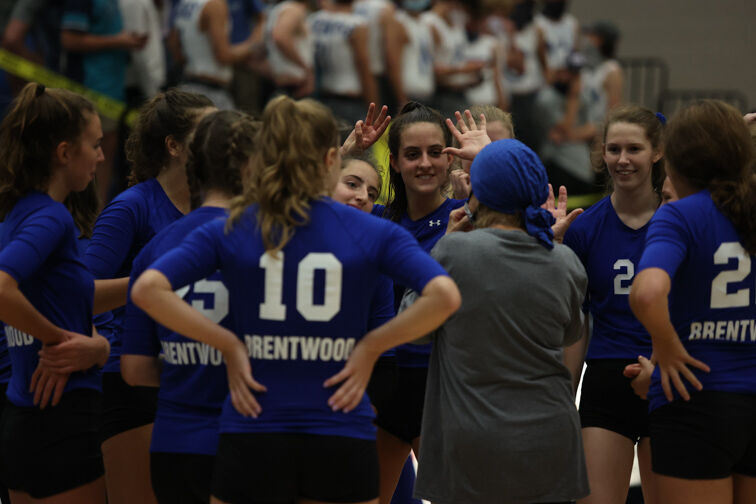 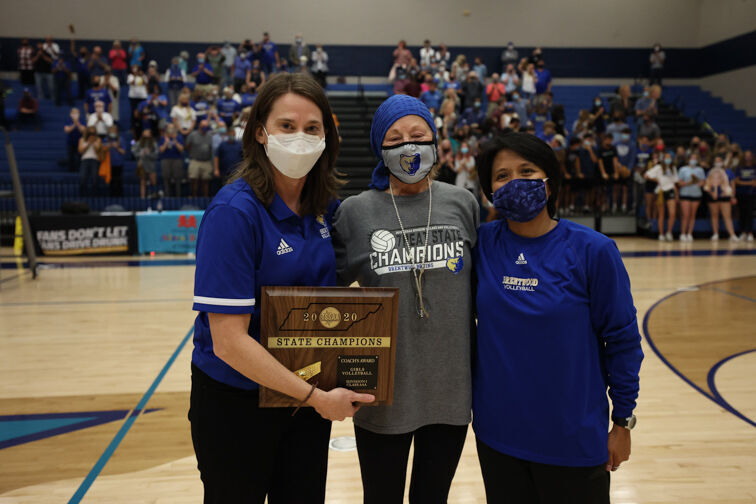 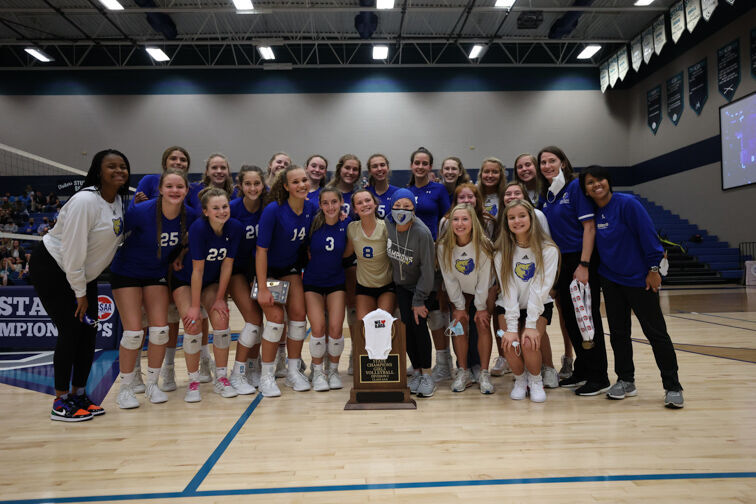 Mike Campbell heard a thud in the bedroom.

His wife, Barbara, had passed out and fallen from the bed to the floor.

“He called the ambulance and they got me to the emergency room and then from there I was flown to Vanderbilt,” said Barbara, the Brentwood volleyball coach. “I think he saved my life. And then I spent two weeks in Vanderbilt (Medical Center).”

Just as her tradition-rich team, one favored for an eighth-straight title, was nearing the postseason, Campbell suffered a stroke on Sept. 29.

“(The doctors) felt like it was a blood vessel that burst and I had bleeding in my brain,” Campbell said. “But it was a best-case scenario because I’m not paralyzed, I don’t have problems with my speech or my movement. So I’m very, very lucky there.”

Campbell, 69, called the stroke a rude awakening because previously she never had high blood pressure, which is a warning sign.

“Three weeks before it all happened, I had a really bad headache and even my teeth hurt,” Campbell said. “I kept thinking it was sinus.”

So she went to an urgent-care clinic and the practitioner gave her medicine and antibiotics to treat a sinus infection.

The medicine didn’t help and Campbell got a substitute teacher the next day.

She went to the emergency room that night around 7 or 8 and her blood pressure shot up to over 200, way above normal.

“They actually had to put a drain in my head that was there for several days,” Campbell said. “And then my recovery was really good with no complications.”

She didn’t have a blood clot like many stroke victims do, so she was lucky.

“And if my husband wouldn’t have found me and heard me fall and acted so quickly, I mean we might be going to a funeral instead of the state tournament,” Campbell said. “It was crazy, so he did good.”

Although she didn’t know it at the time, Campbell got another warning sign the day before the stroke.

No one in her family had ever suffered a stroke.

After a week in the hospital, she was allowed to get up and walk.

“And boy, as I went through those hospital halls and looked in those rooms at other people who had had strokes and oh, my gosh, I knew that I was a lucky girl,” Campbell said.

She didn’t want to become a distraction to her team, which made it to the Class AAA state championship at Siegel one month later. But she decided to attend the game.

“When I walked through that door, I knew immediately, this is where I need to be,” Campbell said. “Those kids played so hard and it was a happy, happy day.”

“It was kind of a whirlwind, wasn’t it,” Noble said. “When it first happened there were just so many unknowns. We didn’t really know what was happening with her.”

Brentwood had a match against Summit the night after her stroke and the coaches weren’t sure if the team should play or postpone.

“We met with our seniors and they decided that Coach Campbell would want them to play no matter what because she’s always said that she wants to win more than she wants to breathe,” Noble said. “I think that was really the right thing to do.”

Campbell is the state’s winningest coach with 1,765 victories during her 33-year career. She was inducted into the TSSAA Hall of Fame in 2018.

She coaches her players to have a sense or urgency on every point.

It was an emotional moment when Campbell walked into the Siegel gym for the state final.

“I was facing the other direction, but I could tell by the crowd reaction that she had arrived,” said Noble, an assistant for the past eight seasons. “As they identified who it was or what was happening, it was like this wave of cheers that came across the gym. It was really cool.”

“I tried not to get emotional because I look ugly when I cry,” Cram said. “I was worried about how the girls were going to take it, but it was amazing to see her here. She has done a lot for Brentwood volleyball and she deserved that honor.”

Cram was worried that the state-tournament tension would raise Campbell’s blood pressure, but she made it through the matches fine.

There were probably some people who thought the Lady Bruins would crumble without their longtime coach.

“Everybody wants to see if we’re going to fail, but we just kept winning and winning,” Cram said “I would say it was a little stressful because you have to step up and make sure we’re doing the right thing.”

Cram, a sixth-year assistant, also coaches for the Alliance Volleyball Club in Franklin. Many of the Lady Bruins played for Alliance.

Noble and Cram kept in contact with Campbell on the phone and with text messages during her absence.

Outside hitter Shaye Eggleston led Brentwood with 21 kills in the win over Siegel. The Alabama commit was named the tournament’s Most Valuable Player.

She said it was stunning when her coach went to the hospital.

“It was definitely just like a big hit for all of us,” Eggleston said. “In all my four years, she has literally never missed a game ever so it was such a big change for us and a big adjustment that we had to make.”

“I’m pretty sure she got out of surgery and was, like, 'what’s the score?'” Eggleston said. “We were still in our district games.”

Her absence turned into motivation for the players.

“Honestly, it just gave us another reason to fight for it,” Eggleston said. “It honestly fueled us because we wanted to win it for her and win every game for her.”

Campbell’s “I want to win more than I want to breathe” quote has almost become the team motto.

“That’s her favorite quote,” Eggleston said. “That quote is what sums her up. Every single year, I probably hear that quote about 20 times. Honestly, before every game almost.”

Eggleston’s older sister, Logan, is a junior outside hitter for top-ranked Texas.

Campbell was devastated when her illness sidelined her with the postseason tournaments just two games away.

“I was extremely grateful and proud of my assistant coaches for holding the fort down and keeping things running smoothly,” Campbell said. “And I was also very proud of my girls for keeping their drive alive.”

There was uncertainty throughout the season due to the coronavirus pandemic.

Preseason scrimmages and out-of-state matches were canceled due to the pandemic.

Campbell’s three daughters and parents gave her plenty of support throughout her illness.

“I’m starting all over again late in life,” Campbell said.

She’s on blood pressure medication and goes in for a CT scan on Nov. 17 to make sure her body is healing well.

Campbell hasn’t decided if she will return to coaching next season.

“I really haven’t made up my mind what I’m doing,” Campbell said. “I am on medical leave the rest of this semester and then I do plan to go back next semester, and then we’ll just see.”

Her youngest daughter, Courtney, just had a baby, Nora Rain.

“That does change your perspective a bit,” Campbell said. “I will be 70 this month. I have a great bunch coming back, the cupboard is full, young kids ready to step in. So all is good in Bruinland.”