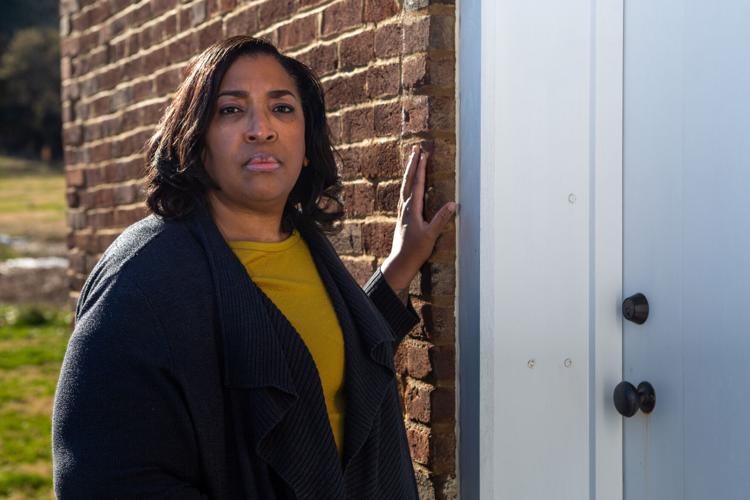 Leah Williams stands outside of the two remaining slave cabins at Brentwood's Ravenswood Mansion, where her ancestors lived and were enslaved. 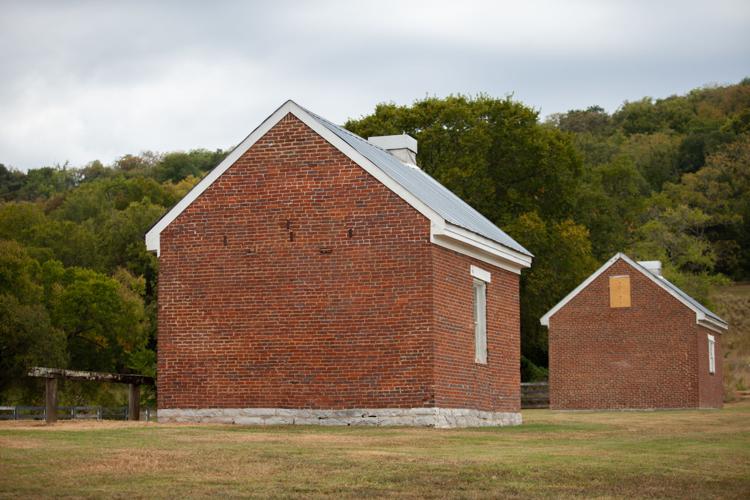 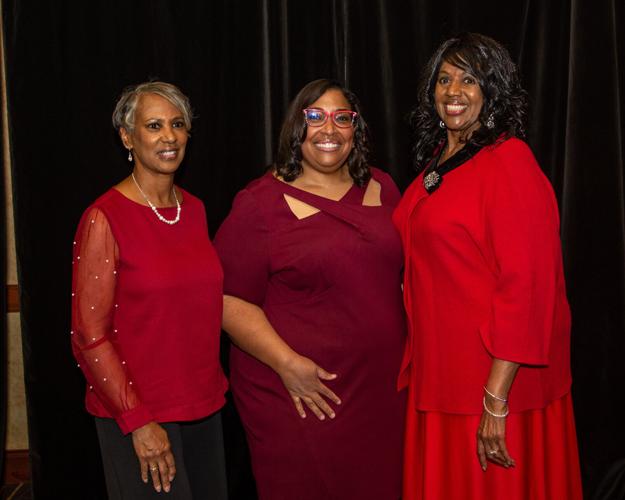 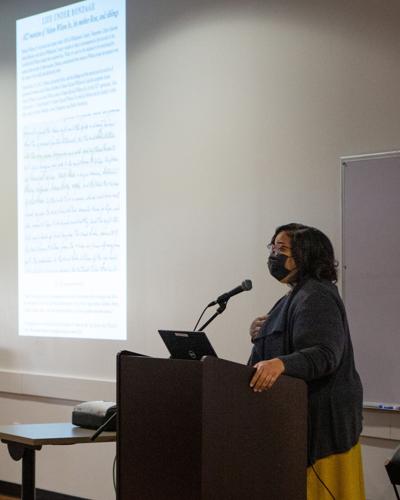 Leah Williams gives a presentation on her genealogy research at the Williamson County Public Library's main branch in Franklin on Sunday, March 13, 2022. 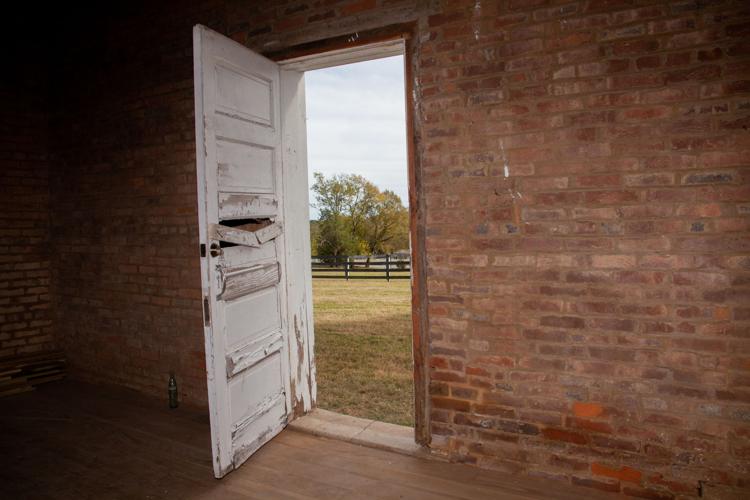 Interior of the West Ravenswood slave cabin looking out onto the Ravenswood Mansion grounds in 2019 prior to the door being replaced as part of the renovation of the two historic structures.

Leah Williams, an Ohio educator, has spent the last two years researching and discovering her roots.

This path led her to Williamson County where her lineage is traced back to the enslaved people of Ravenswood Mansion.

Williams has been working on the genealogy project throughout the ongoing COVID-19 pandemic with the help, resources and support of the Brentwood Historic Commission, the African American Heritage Society of Williamson County and the Williamson County Public Library’s Special Collections department.

“We were all so shook with the initial stuff with the pandemic, there was just so much uncertainty, I think it helped to keep me busy,” Williams said. “It really helped to open up doors within the family and outside.”

Williams was first introduced to genealogy when her then high school-aged sister completed a project interviewing her grandparents.

In college, Williams enrolled in a genealogy course and completed her first project that focused on her father’s side of the family.

This led her continuing to explore her family lineage, a process that pre-social media required hours of physical research, pouring over microfiche copies of documents in libraries and cold-calling potential relatives.

That research process has now transformed into utilizing the numerous online resources available including ancestry websites and collecting as much first-hand information as possible.

On Saturday night the AAHS honored Williams with their 2022 Pioneer Family Award, and on Sunday afternoon, the Williamson County Library’s main branch in Franklin hosted a presentation by Williams on her research.

Williams’ presentation detailed records of her, until recently, unknown family, tracing back her roots to her fifth great grandmother, Rose, and an “unknown Wilson male.”

The Ravenswood plantation was first established in 1825 by James Hazard Wilson II and his wife Emeline Wilson. According to Ravenswood Mansion’s online history, by 1840, 19 people were enslaved by the Wilsons in Brentwood. This information had just been updated to Ravenswood website in 2019 when a Google search led Williams to the update in 2020. Then, she spotted a familiar name of one of the enslaved people from her own research: Nelson.

She then contacted Ravenswood Mansion and was connected with the City of Brentwood, which was able to share local research with Williams. It led to the confirmation that this was in fact the same Nelson she had been looking for.

“I did not know my fourth great-grandfather, Nelson Wilson Sr., I did not know his mother, Rose, his siblings or his wife, Lucreasey, or their four children, one of whom is my third great-grandfather, Nelson Jr.,” Williams told the crowd of attendees during Saturday night’s Black Tie Affair. “I did not know him, and I do not know all of the details of his life, but I can imagine what he experienced and endured in his lifetime, and deep in my soul I know he imagined me and all of his descendants living a very different reality than his own.”

Williams had coincidently been in Brentwood before even knowing of her connection to the enslaved people at Ravenswood. She first saw the two existing slave cabins, which were renovated by the city in 2019, just days before her attendance at the Black Tie Affair.

“When I stood outside the slave cabins at Ravenswood Plantation this week, I listened to the birds sing and I gazed up at the moon and the light of day and I asked God in that moment if Nelson had ever stood there in that same spot and gazed up at that same moon,” Williams continued. “And if he had, what did he think about himself and his world? I wonder what made him lament, what brought him joy, what consumed his dreams at night and his hopes in the morning.”

Records indicate that 13 slave cabins existed on the property with the majority of the cabins stretching up the hill behind the main house, property which is now a part of the City of Brentwood’s Marcella Vivrette Smith Park.

Some of those cabins are believed by the city to have been wooden structures but the exact locations and the construction of the cabins have been lost to history.

“I just feel rooted and grounded in myself in a different way than last week,” Williams told the Home Page. “It’s different to read it in a book or see it in a document, but to come here and touch the bricks and to go in there and walk on the same floors that are still there that possibly my ancestors walked on, it’s just a different thing that gives you appreciation for something that I think that we will not ever really understand.”

As slavery was obviously not a consensual relationship, likely neither were the intimate relationships or instances of children between the enslaved people and their enslavers, this added to the complicated history and family lineage.

Despite the complications, Williams called the cabins and the land of Ravenswood a sacred place that invokes both pain but also gratitude for the strength of her ancestors and those who fought to end the institution of slavery.

“For me it was like coming home,” Williams said. “Echoes of your past that you feel in your soul.”

As genealogy and ancestry work has become more prevalent and accessible in the digital age, Williams said that the work allows people to help find themselves. It reveals the connections that can be made with both the past and the present, confronting the truths and telling the full story of who we collectively were and are through the individuals.

“It informs your humanity and hopefully helps you to be more compassionate towards others,” Williams said. “That’s why I’m passionate about this work and I think it’s important for organizations, like the City of Brentwood, who had the foresight to buy and preserve this property. It's a hard history, but it’s necessary, and it’s our history.”

“In my opinion, even in growing, there’s always things that are uncomfortable and painful, but they make you who you are and they make you better, and I think that when we confront those parts of our history that can be uncomfortable and can be painful,” Williams continued. “It’s not blaming anybody, it’s just what was, then we can hopefully not have those things happen again and again and this helps us to be better and stronger people.”

Now Williams, who spent nearly two decades in education from teaching music to serving as a principal, is hoping that, by uncovering and connecting the past in all its truth, it will help to better understand the present and shape the future.

“While I’ll never know the answer to those questions about Nelson, I do know that he persevered along an arduous journey through bondage and into freedom,” Williamson said on Saturday night.

“And for that, I say thank you to Nelson Sr., thank you to Rose, Lucreasey and all of the known and unknown Wilson ancestors who persevered against tremendous odds to push my family and this community forward into a different day, and I hope and pray that all of us in this room have the endurance and awareness to do the same for the next generation.”