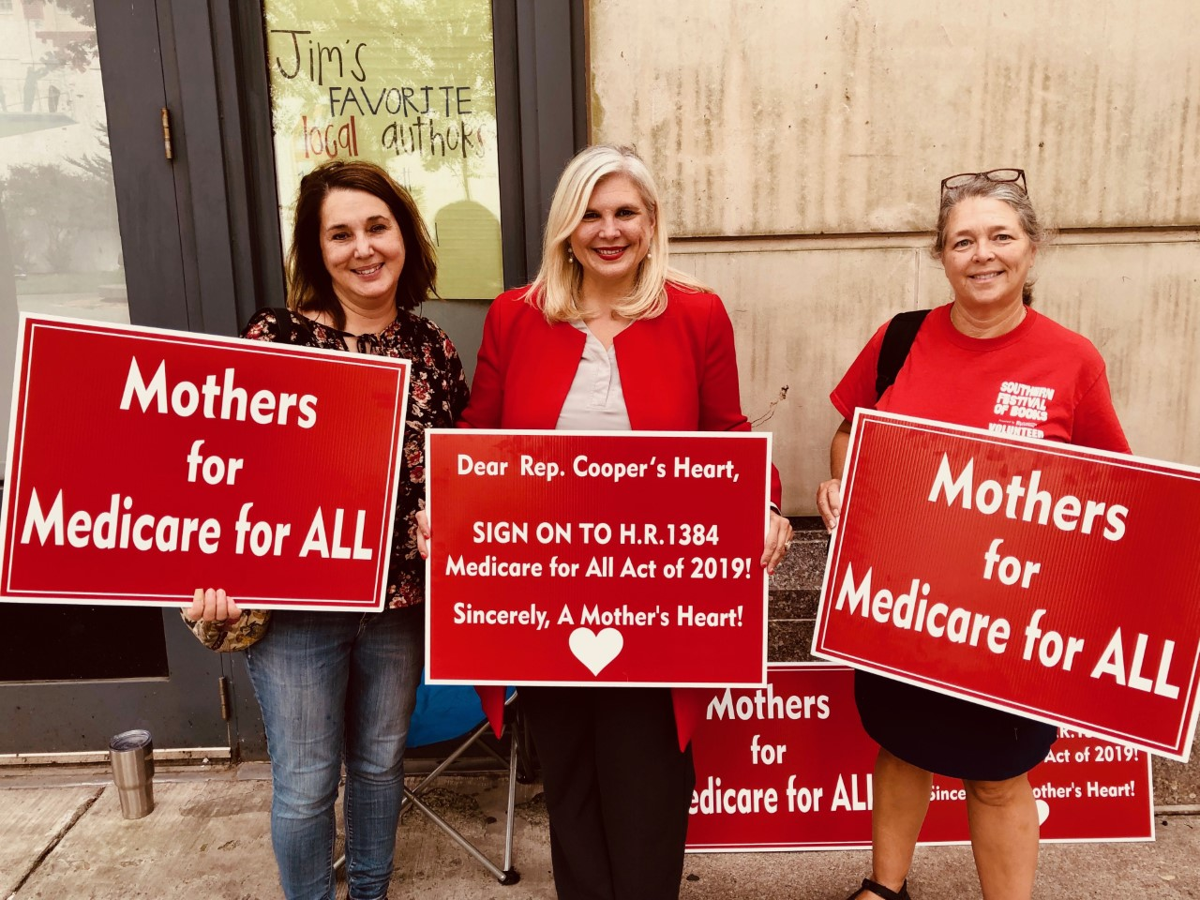 Kristen Grimm (center) stands in front of Congressman Jim Cooper's office in Nashville in the hopes of rallying his support of the 2019 "Medicare for All" bill. 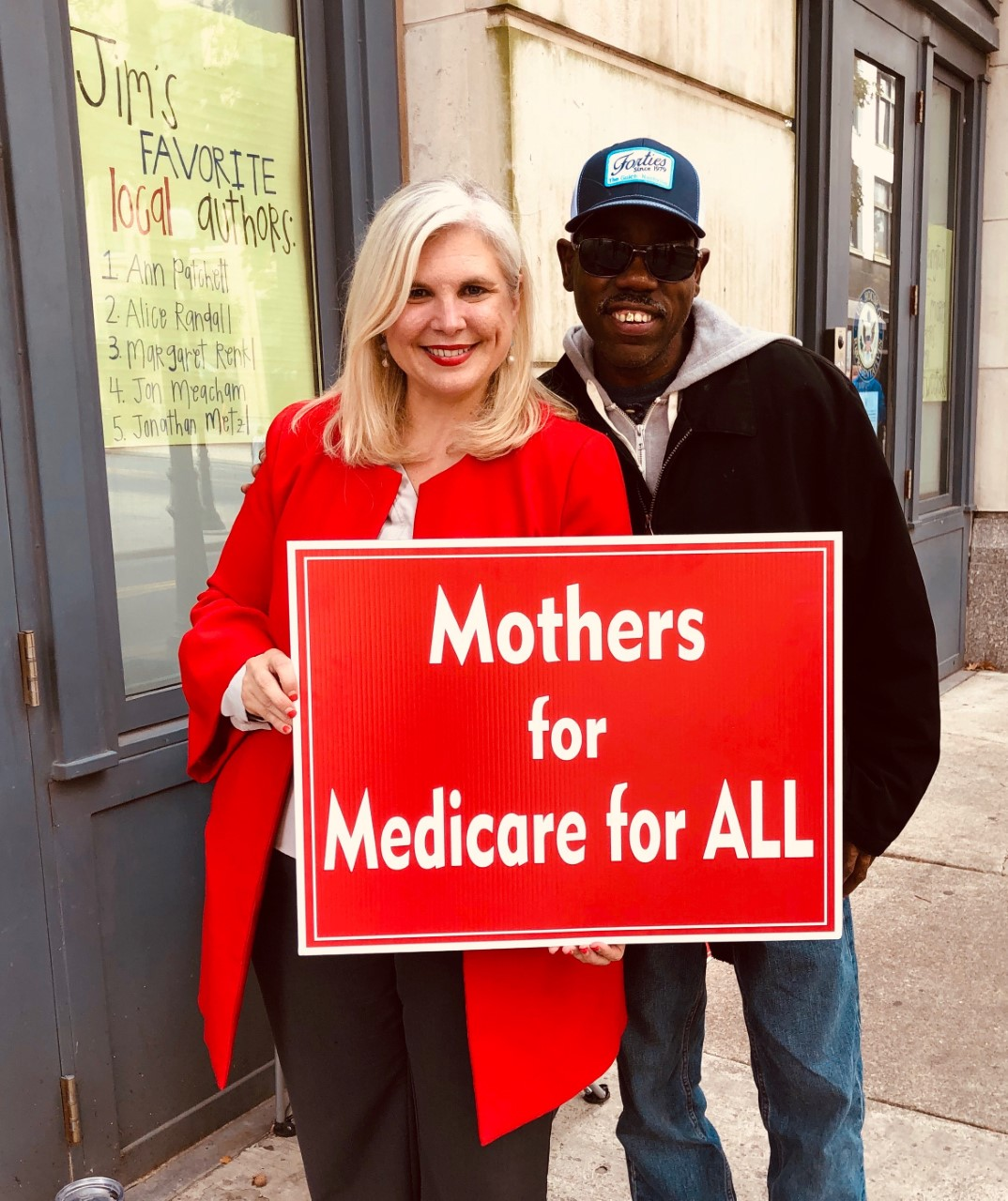 This story was edited on 10/17/19 to correct an error in which the Home Page incorrectly wrote Grimm had campaigned on a single-payer healthcare system during her 2018 State Senate campaign. Grimm instead ran on expanding Medicaid.

When Kristen Grimm challenged Republican Jack Johnson for the State Senate seat in 2018, there were many motivators for the political outsider to enter politics for the first time in her life; to make housing more affordable, to more adequately fund schools, and to help fight poverty. By far the strongest motivator for Grimm, however, was to ensure that no Tennessean went without healthcare coverage by way of expanding Medicaid.

While Johnson would go on to claim victory in that race, Grimm’s goal of expanding Medicaid in the state would eventually transform into a desire to see the implementation of a single-payer healthcare system on a federal level. So enters Mothers for Medicare for All - a new nonprofit organization launched earlier in October that aims to reach 20 million mothers in the year 2020 towards its cause.

The mission of Mothers for Medicare for All

“I want change,” Grimm said. “I want this nation to change [its] opinion on the way we do healthcare. People are dying and people are suffering - I'm not willing to wait 20 years for this to happen. We've already waited decades, and there are people who are suffering all over this nation because we have leaders who just won't do the hard things.”

Grimm explained that she would like to see her nonprofit eventually have a volunteer advocate in every state. That advocate would then be tasked with educating as many people as possible on how to press for healthcare reform in their respective state and community.

“I just know that there are very few forces in the world that can go up against a mother's love,” Grimm said. “We are a force, and I wanted to start a movement of mothers that will bring about comprehensive change - not just for our kids, but for all of us.”

While the idea of any individual not having access to medical care - whether it be preventative or urgent - was severely troubling to Grimm, she explicitly singled out children without healthcare coverage as perhaps the most troubling aspect of the current healthcare system in the United States. Calling it “normalizing suffering,” Grimm cited the tens of thousands of annual deaths that could have potentially been prevented with universal access to preventative care.

“I believe it's 5.5 [percent of] children who don't have health insurance in this country right now - there should not be one child in this country who does not have comprehensive healthcare,” Grimm said. “We are seeing the insured rates of our children in this nation going in the opposite direction. How many parents are delaying treatment, delaying taking their children to the doctor because they don't have the money to go?”

Recent data from the United States Census Bureau affirms Grimm’s claim that 5.5 percent of Americans under the age of 19 are uninsured, coming out to a total of 4.3 million uninsured children and teens. The number of uninsured youth has also increased over the previous year by nearly half a million, or .6 percent, and counting.

“We lead the nation in medical debt, rural hospital closures per capita, and this state just proves on a daily basis that we need federal intervention and a federal solution,” Grimm said. “I've come to the conclusion that the states are not worthy of managing healthcare for anyone, especially the state of Tennessee, [which] proves that on an annual basis - almost on a daily basis.”

Years of fighting for her own son’s well-being

While stories of Americans going into crippling debt after medical emergencies were certainly strong motivators for Grimm in starting this venture, perhaps the strongest motivator of all has been her son Thomas.

While only 19 years-old, Thomas has already undergone 24 separate surgeries in his lifetime due to a chronic vascular condition. During the recession of 2008, Grimm’s family faced an economic downturn, and thus were unable to afford health insurance for a period of time.

Grimm recounted a moment during her son’s 12th surgery where she had a glimmer of hope for the future, thinking that perhaps it might be her son’s final surgery. After speaking with doctors after the procedure, Grimm was told that her son would likely need regular surgeries for the rest of his life.

Grimm recounted another moment where her son was having severe difficulties breathing, and rushed him to the emergency room. Following the visit, Grimm was given a prescription for several antibiotics.

“I remember going to a pharmacy right here in Franklin [to get my son’s medication],” Grimm recalled. “I went to the drive thru and I got my debit card declined - the prescriptions were almost $400. I had to drive away without medication for my son that was going to help him breath that night. Those moments stay with you forever.”

While Grimm has a bevy of ways she’d like to see her goal of implementing a single-payer healthcare system achieved, one of the more immediate actions she’s taken has been to push for Democratic Congressman Jim Cooper to sign onto Bill H.R. 1384.

Known as the Medicare for All Act of 2019, the bill has been reintroduced into Congress every year since 2003, and would establish a single-payer healthcare system similar to that of Canada’s Medicare. In addition to requesting an interview with the congressman for weeks to no avail, Grimm and her supporters have been standing outside of Cooper’s Nashville office every Friday, hoping to persuade him to support H.R. 1384.

“I strategically chose to do the action in front of his office because I feel like we should not have leaders who waffle on healthcare, and it appears to me that he's waffling and going back and forth,” Grimm said. “There's too much at stake.”

So far, only one congressman from Tennessee has signed onto H.R. 1384, that being Congressman Steve Cohen representing parts of Memphis. Cooper had cosponsored a nearly identical bill back in 2017, but has yet to support its most recent iteration for unspecified reasons.

“I believe Representative Cooper is a kind man, and I believe that he's very well respected - not only in Nashville and the state of Tennessee, but in Washington,” Grimm said. “I'm standing there to call on him to be a leader like he was in 2017, and I believe he can be a force for change in the House of Representatives, and maybe lean into the colleagues that are also refraining from signing onto this legislation.”

To learn more about Mothers for Medicare for All, click here to visit the organization’s Facebook page. The nonprofit has also set up an online fundraising page which can be reached by clicking here.