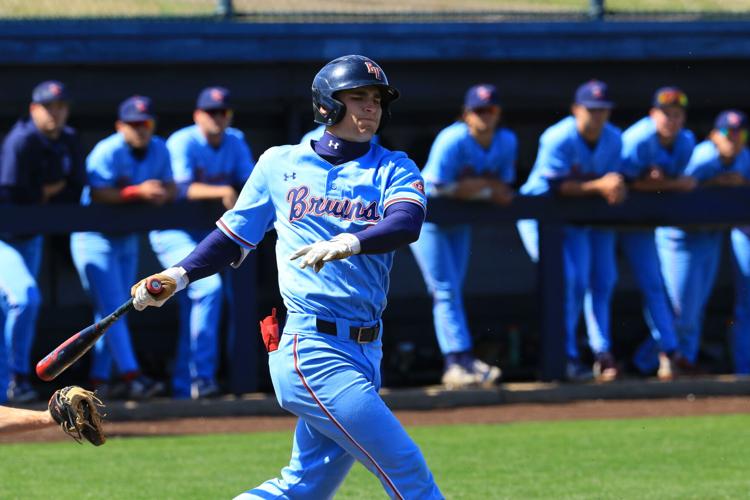 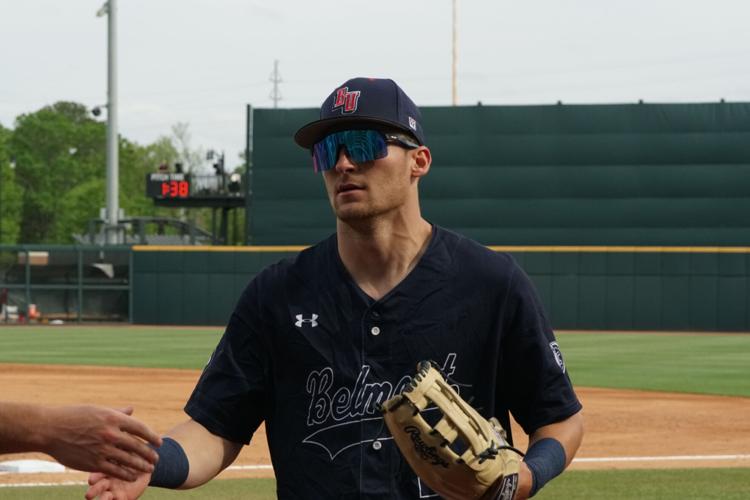 Judging by his last name, Guy Lipscomb should have wound up on Granny White Pike.

But Belmont was the only school to offer the former Franklin star a baseball scholarship so that’s where he is.

Lipscomb is frequently asked if he’s related to David Lipscomb, the founder of Belmont’s archrival, Lipscomb University, but he is not.

“A lot of people always ask me, ‘How did you recruit a Guy named Lipscomb,’ ’’ Jarvis said. “It’s just something we have some fun with.”

Lipscomb is having lots of fun at Belmont.

The sophomore leads the Ohio Valley Conference in stolen bases, ranks among the league’s best hitters and is playing like a Gold Glover in center field.

Lipscomb homered in his first at-bat of the season.

First swing, second pitch. Right down the middle, a little in. Over the fence in right field at ES Rose Park.

“That kind of gave me some confidence,” Lipscomb said. “It was kind of funny because just immediately I knew it was a homer, so I was pointing at the dugout. Yeah, it was really awesome.”

Belmont lost its opener to Toledo 3-2 before rattling off 10 straight wins.

Lipscomb has stolen 28 bases, twice as many as the No. 2 base stealer, teammate John Behrends with 14.

“Getting to Belmont, we worked on it every day in practice, working on just the timing of it and everything like that so it’s become a lot easier and I’m getting more comfortable as we go along,” Lipscomb said.

Last fall, Lipscomb ran a 6.4 in the 60-yard dash, a measurement of a base runner’s speed.

He said anything below a 6.9 is considered a good time.

Lipscomb’s quick acceleration makes him a dangerous base runner.

“He gets to top speed in just a short amount of distance, which is always very effective for the greatest base stealers,” Jarvis said. “You see that when you look through history at guys like Rickey Henderson or Lou Brock.”

“There has to be a natural gift involved, but (Guy) has worked really hard through strength and conditioning programs and sprint work and things like that to develop that,” Jarvis said.

Lipscomb believes timing and getting in rhythm with the pitcher are two of the biggest keys to being a good base stealer.

“It’s really all about the jump that you get,” Lipscomb said. “I would say that’s pretty much what I try to do is get a really good jump and it usually works out.”

Belmont base runners usually take a 6-feet or a 3-feet leadoff from the bag, depending on the pitcher or situation.

The pitchers’ pickoff moves and quickness to home plate are the main variables.

Left-handed pitchers have the advantage of facing the base runner.

“It’s a way bigger challenge, but also it can be just as easy,” Lipscomb said. “They all kind of have a different tell-tale sign of when they’re going to the plate, so I think it’s just trying to see it early in the game and using it to your advantage later when you’re on the bases.”

“His head kind of twists back and forth and you can’t really tell from first base when he’s coming at you and when he’s going to the plate, so it’s really tough,” Lipscomb said of the 6-7 sophomore.

Lipscomb believes another teammate, Jackson Campbell, is the most difficult catcher to steal against.

“He’s a fifth-year (senior), a beast,” Lipscomb said. “He’s got a cannon on him. We intersquad all fall and all the beginning of spring, so I’ve gone against him every day and he’s definitely one of the best in the country.”

Lipscomb’s favorite steals were two he got as a freshman in an 11-2 loss before a big crowd at then No. 4 Tennessee.

He stole five bases for Dubois County (Ind.) in an Ohio Valley wooden bat summer league game against Owensboro in 2021.

Belmont’s coaches encourage Lipscomb to be fearless on the basepaths, so he tries to adopt that mindset.

“All of our kids have a green light in our system and the only thing that we typically have is red lights in certain situations depending on the score or circumstances,” Jarvis said.

Lipscomb ranks among the best base stealers Jarvis has coached in his 25 years at Belmont.

Base stealing is an important weapon in the Bruins’ offensive scheme.

“It can become a distraction for pitchers,” Jarvis said. “It can move runners into scoring position. There’s a lot of debate in baseball about the sacrifice bunt not being a worthwhile out if you’re playing the game according to sabermetrics.”

Stealing a bag allows a team to put a runner in scoring position without giving up an out on a sacrifice bunt or a hit and run.

Several of Lipscomb’s steals came when opponents knew he was about to go.

“To me, that’s just a real high compliment to him that even when they know he’s getting ready to do it and they’re trying to do everything they can to disrupt it and prevent him from doing it, there have been a number of situations where he went ahead and took a bag, both second and third,” Jarvis said. “Ánd that really gets frustrating for a defense.”

Lipscomb is also one of the OVC’s top hitters with a .378 batting average and 23 RBIs.

He began the year as the leadoff hitter before moving to third in the batting order.

Lipscomb is the 13th toughest batter to strike out in NCAA Division I, averaging one strikeout every 17.1 at-bats. He’s only fanned seven times in 120 at-bats.

“He works extremely hard from a technique standpoint on trying to keep his barrel in the (strike) zone,” Jarvis said. “By keeping the barrel in the zone, he increases the amount of contact that he makes and he makes great contact in a lot of two-strike situations.”

Lipscomb doesn’t chase many pitches out of the strike zone, decreasing his strikeouts.

The left-handed hitter was named OVC Player of the Week after going 13 for 19 during one stretch three weeks ago.

“His tool set is really good,” Jarvis said. “To Guy’s credit, he’s got a humble heart and works extremely hard and shows up with a tremendous competitor’s approach.”

Lipscomb hasn’t made any errors and has 75 putouts in center field.

“We practice it every day, just groundballs off the machine, fly balls at the wall,” Lipscomb said. “Our coaches do a really good job of putting us in game-like situations at practice, which definitely helps a lot.”

Lipscomb tries to get to every gap and scouting reports help him know hitters’ tendencies.

He’s ranked as the OVC’s No. 6 major league prospect for July’s draft by the Perfect Game scouting organization.

“Probably 25, 26 major league teams have had scouts come in and evaluate our players,” Jarvis said. “I feel like he’s somebody that all of these scouts that have been in to see us recognize his ability and have interest in him, and I think he’s somebody (that’s) on a lot of different watch lists.”

A hamstring injury and an illness hampered Lipscomb during his freshman season when he hit .259 with 14 stolen bases.

“I think this year’s numbers are reflective of who he really is,” Jarvis said. “Last year he was never able to kind of get it going, dealing with those health issues. We saw the athleticism and gifts that he has last year and we were expecting really big things out of him as a freshman, but as I said it was just a year where he had a little bit of adversity and struggles to get through health-wise.”

Lipscomb was a three-year starter in the outfield for Franklin.

“He was phenomenal, obviously,” said Jon Whipple, who coached him at Franklin. “It’s not really surprising, seeing him do what he’s doing right now.”

Lipscomb made a diving catch at the warning track in center field to preserve a win over LSU-bound pitcher Blake Money with Summit in 2019.

“I thought for sure it was going to be a double in the gap and Guy just came out of nowhere and made probably one of the best catches I’ve ever seen,” Whipple said. “He was just so athletic for us.”

Lipscomb was one of the fastest players Whipple ever coached and he doesn’t remember giving him the red light on the base paths often.

“He was like 24 for 25 (in stealing) as a junior for us,” Whipple said. “His senior year we only got to play three games (due to the pandemic), but if we had played a full season he probably could have stolen close to 40.”

Lipscomb hit about .300 each year for Franklin.

A lack of power in high school may have hurt Lipscomb in recruiting, but he put on 15 pounds of muscle during the COVID-19 shutdown.

Lipscomb played wide receiver, quarterback, running back and safety in football for Franklin.

He rushed for 271 yards and one touchdown in a 42-41 double-overtime win at Centennial as a senior running back in 2019.

His dad, Greg, was an outfielder and his brother, JT, played baseball at Tupelo, Miss. Elvis Presley was born in Tupelo.

“Guy’s a heck of a guy and I’m glad to see him doing well at Belmont,” Whipple said.

There are five other former Williamson County players and another from Ensworth on Belmont’s roster:

“That group from Williamson County, I feel like there’s a lot of really good baseball going on there in those high school programs right now,” Jarvis said.