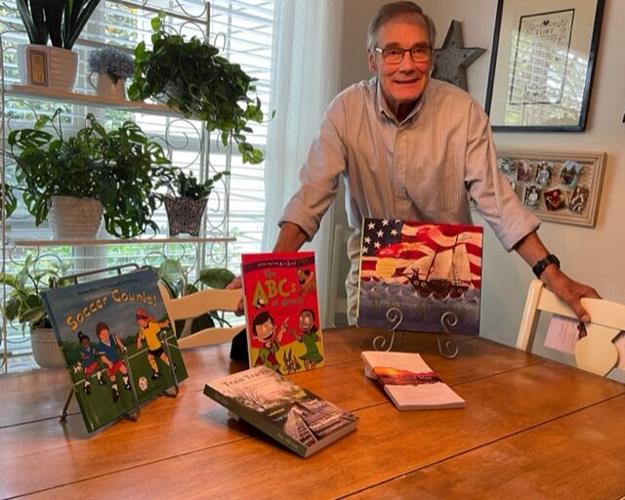 Franklin author Peter Alderman with the five books he has published 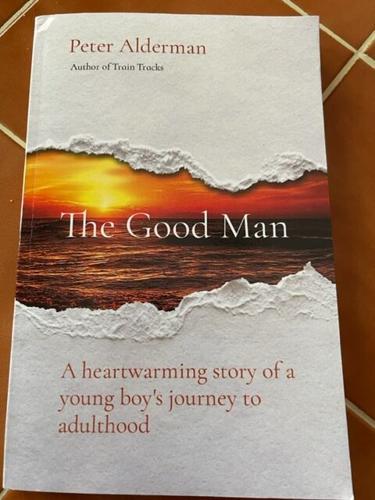 With his recently released novel titled The Good Man, Franklin author Peter Alderman hopes he gives readers both an entertaining story and one that is thought-provoking.

It’s a relatively short tale about a farm boy from Paw Paw, Michigan, who earns a preferred walk-on status to play football at Western Michigan University. After graduation, he ends up getting his master’s degree from Boston College, and along the way encounters and has to overcome some of life’s typical obstacles.

“It’s one I wanted to write because it has a lot of character lessons in it that are in story form,” said Aldermen, who previously wrote three children’s books and his first novel, Train Tracks. “I wrote it that way so when my grandsons get older they can enjoy a read but still learn some lessons about how to treat people and how to be respectful and accepting diversity and not judging people.”

Alderman’s first novel was self-published two years ago and follows the emotional turmoil of two young people who emerge from opposite social structures, according to the book description.

It tackles some tough subjects and is even a bit dark in places, especially with its coming on the heels of children’s books Alderman had previously written —Soccer Counts with prolific children's author Barbara McGrath; The Rocket's Red Glare, a patriotic account of the origin of the national anthem and is accompanied with a CD that features country star JoDee Messina, who sings the national anthem and does a reading of the story; and The ABC's of Health, which was endorsed by three pediatricians and helps children learn about a healthy lifestyle.

Alderman said that when he speaks at book clubs in person or through Zoom, he has often been asked if he planned to write a sequence to Train Tracks. But his thoughts have generally been elsewhere.

“It was uplifting and rewarding at the end. But I thought I would go in a totally different direction, that I would write a love story and a football story, with a lot of lessons and interesting characters. And so I wrote The Good Man.

Alderman was a teacher in Massachusetts for 37 years before retiring and eventually moving to Franklin with his wife, Pam. His experiences as an educator are part of what he has put into The Good Man.

“When I taught school,” he said, “every student that walked into my class was valued. It did not matter what religion they were, what color they were, what socio-economic status they were, or where they were academically. I greeted them with a smile and encouragement and hope. I wanted them to know they could succeed, and every student had something to offer.

“I tried to incorporate that into the book as well.”

The Good Man can be purchased through Amazon and Barnes and Noble.