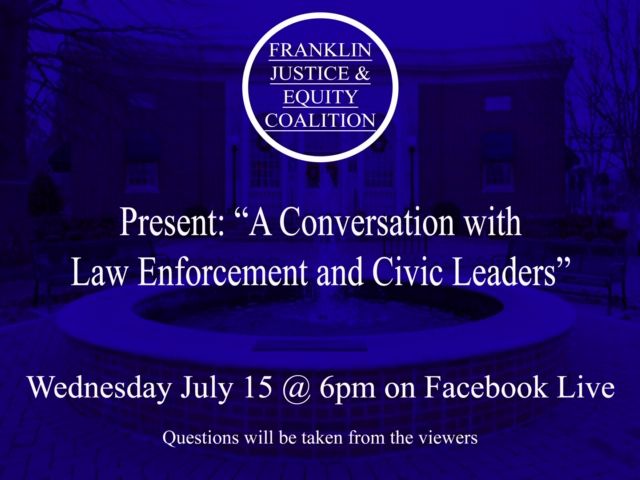 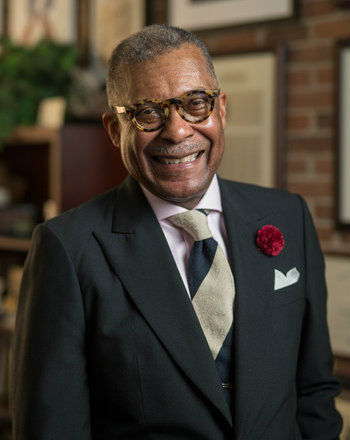 Law enforcement and government officials will be on hand for the next panel discussion presented by the recently formed Franklin Justice and Equity Coalition Wednesday beginning at 6 p.m. on Facebook Live.

“The conversation for Wednesday is a bridge-building opportunity for law enforcement, civic leaders and the community to gain a better understanding of how policies and procedures impact the community, and for the Leaders to speak directly to the concerns of the community,” Simmons said.

Wednesday’s discussion comes less than a week after a discussion the FJEC held last Thursday titled “A Conversation on Christianity and Confederate Monuments,” a Facebook Live event in which more than 1,900 people viewed.

“We expect this one to have a lot more because it is our county and city leaders sitting on the panel,” Simmons said.

The FJEC was formed by Herbert and Simmons on the heels of the Jesus and Justice Candlelight Prayer Vigil that was held June 2 in downtown Franklin in response to the killing of George Floyd in Minnesota. Its first public event was a Juneteenth celebration held June 20 at First Missionary Baptist Church on Natchez Street, followed by Thursday’s Facebook Live event on Christianity and Confederate monuments.

“Our vision is simple,” Simmons said. “The FJEC exists to ensure justice for current and future generations in Franklin and Williamson County.”

Simmons added that the foundation of the group stands on five pillars of impact: education, law enforcement, housing, economics and mentoring.

Click here for more information on the Franklin Justice and Equity Coalition and Wednesday’s event.

Churchwell, a Nashville native and Williamson County resident, is the son of Robert Churchwell Sr., who broke the color barrier at the Nashville Banner as the first full-time African American journalist hired by a major newspaper in the South.

In the FrankTalks lecture, hosted by Franklin Tomorrow, Churchwell discussed the various forms of biases and the importance of shedding those in individuals, in the workplace and in communities.

“Unconscious bias can be very disruptive because it does not allow you to have the kind of diversity that we all need in our institutions, in our offices and in our hospitals — in our communities — that bring different ideas and thoughts into a problem-solving situation,” Churchwell said.

“Data … shows the more diverse your groups and research teams, the more diverse ideas come out of it. But we have to begin to slow our thinking down to mitigate our biases about people who are different from us.”

Churchwell recommends that people keep in check their first impressions of someone they meet, to slow down an initial reaction to someone different and ask if they are really being fair in their judgment.

“But the biggest one is to be more engaged in our lives, in our social strata with people who are different from us,” he said. “The more you have intimate relationships with people who differ from us, that will then mitigate the biases more than anything else.”

He also explained what is known as the five finger rule. A person should consider the five closest people in their life who they turn to for making a decision when the going gets touch.

“If all five of those are from the same race, ethnicity or gender group, you have work to do,” Churchwell said as he concluded his presentation. “And it is difficult to bridge the gap to go meet and engage people that are different from you.

"But in this world where we’re trying to grapple with racism in America, you’re going to have to become comfortable being uncomfortable to go and greet and be with people different from you.”