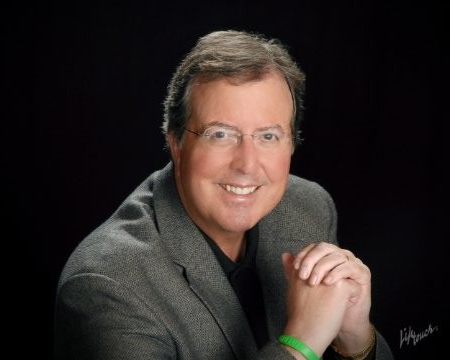 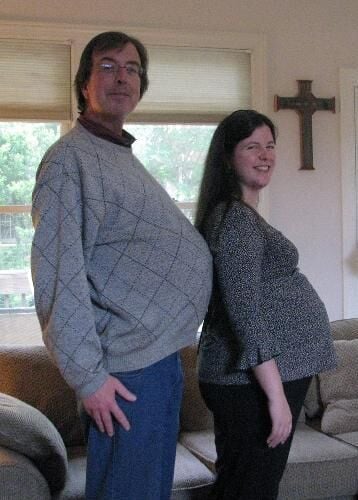 Standing alongside his pregnant daughter, Dr. Rachel Baum Sefton, more than a decade ago, Steve Baum demonstrates how large his liver had grown before he had a transplant Nov. 11, 2009.

Longtime Franklin resident Steve Baum was recently elected to the national board of directors for the American Liver Foundation, 11 years after he had undergone not only a liver transplant but had also received a new kidney in the same surgery.

Suffice it to say, Baum has been an active organ donor advocate ever since the dual transplant occurred Nov. 11, 2009.

“Having a transplant is a rebirth,” said Baum, 65, whose surgery took place at the University of Alabama-Birmingham Hospital. “Afterward you surround yourself with people, recipients and family, who have been through similar things. The people who have had transplants are remarkable in how they go out there and become advocates. It’s ingrained.”

After serving on the local board of the American Liver Foundation since 2013, including as vice-chair since 2018, Baum was asked to serve as a national leader representing organ transplant recipients. In addition, Baum is a volunteer organ donor recruiter and public speaker for Donate Life TN and the PKD Foundation.

He is also a founding member of the Save a Life Society of the American Transplant Foundation, and was a Paul Harris Fellow with the Franklin Noon Rotary.

Baum, who retired in 2018 after working for the U.S. Treasury, IRS, and previously in the restaurant industry and as owner of a local wine shop, was diagnosed with polycystic kidney disease in 1986. He lived with it for years, and in 2008 he was also diagnosed with polycystic liver disease. Baum soon got on a waiting list for both a new liver and a kidney, and good fortune fell his way.

“I was able to get a very good match of a liver and a kidney from the same deceased donor, and was fortunate it happened in one surgery," he said. "I was very, very lucky. We are forever thankful to the donor, and family, whom we do not know.”

Recovery, in effect, was another blessing, especially considering the fact that Baum had had a 30-pound liver and a 9-pound kidney removed and then replaced with new ones. He had always been active, but the strain from an expanding liver had begun taking its toll as Baum reached middle age.

“I had an energy that I hadn’t had in 10 years,” Baum said of what he called his second chance. “I was already in my mid-50s, and I wanted to give back because I knew how lucky I was. I had such an energy that the things I could not do [before the transplant], I was able to after the surgery.

Along with the physical energy Baum had gained after the transplant, his role as an advocate also became much livelier.

“Today, I actively volunteer and recruit people to sign up to be organ and tissue donors,” Baum said in the blog that’s on his website. “Ultimately, I would like to sign 1,000 new donors. I’m somewhere short of 500 now. If my story moved you and you have not registered to be a donor, I hope you will sign up at registerme.org.”

Baum and his wife, Anne, have lived in Franklin since 1986. They have two children and two grandchildren.