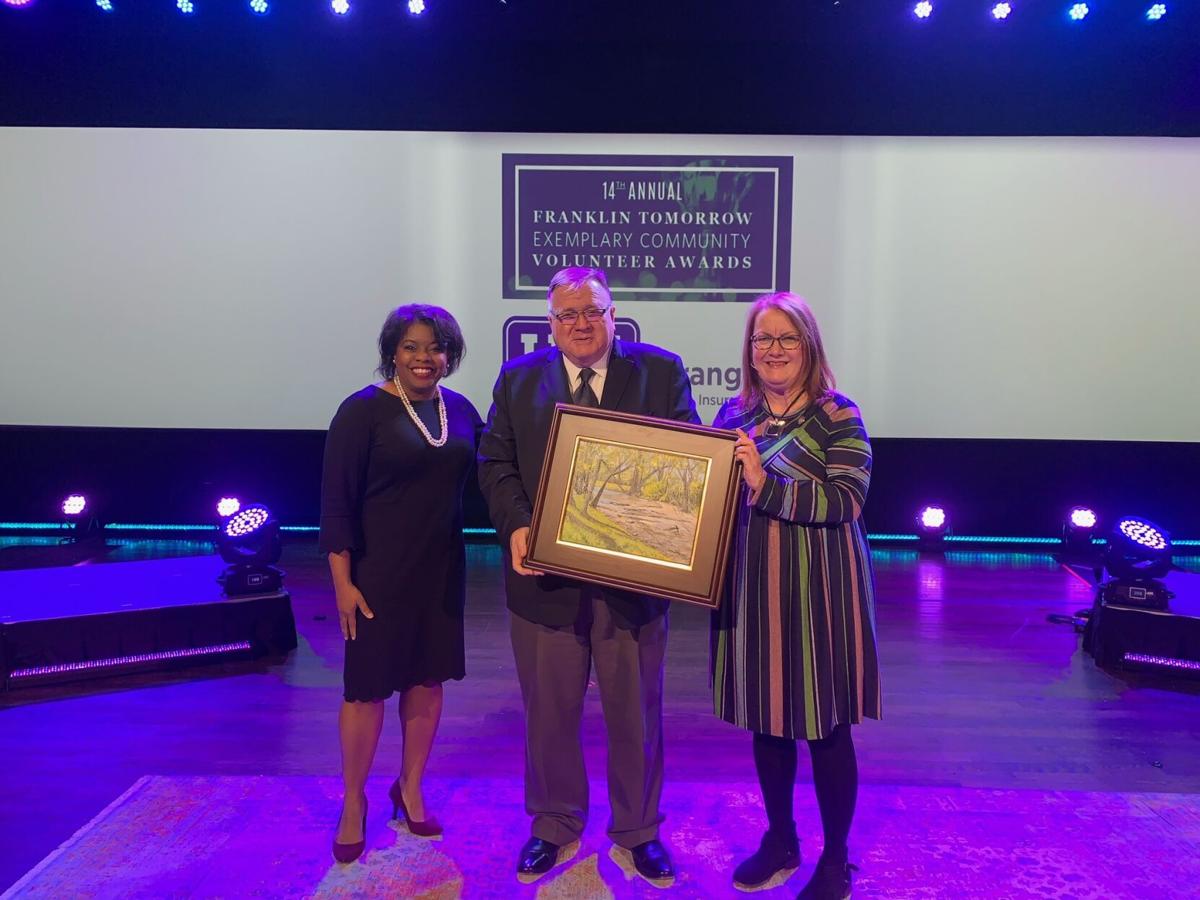 Tom Lawrence, standing with Allena Bell (left) and Mindy Tate from Franklin Tomorrow, holds the painting he received as the recipient of the Charles M. Sargent Legacy Award. 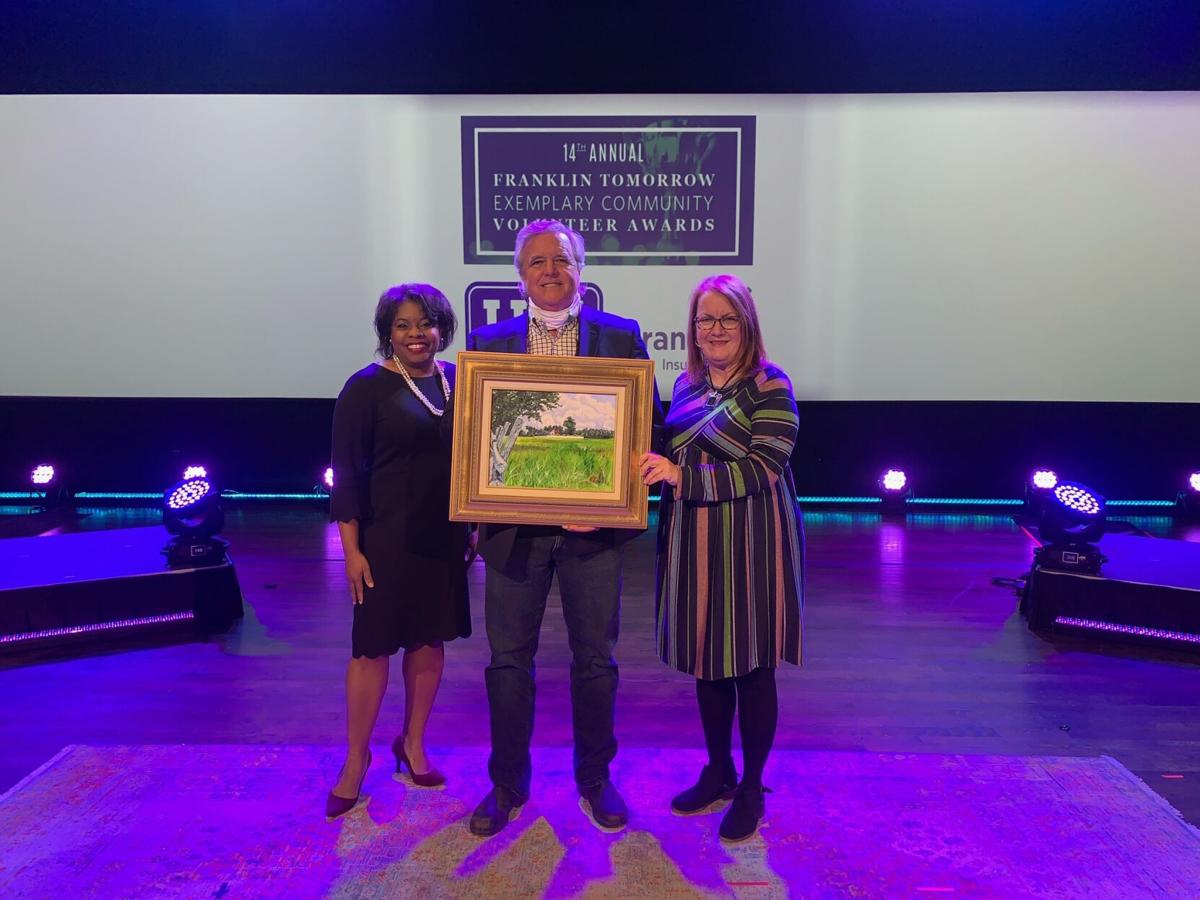 Tom Lawrence, standing with Allena Bell (left) and Mindy Tate from Franklin Tomorrow, holds the painting he received as the recipient of the Charles M. Sargent Legacy Award.

According to a press release sent by Franklin Tomorrow, individuals and groups were also honored in six other categories, including a new award this year for Neighbor to Neighbor. This year’s Volunteer Awards program, which had to be presented remotely because of the impact from the coronavirus pandemic, was presented in partnership with USI and Grange Insurance.

“During Tom Lawrence’s more than 50 years as the Voice of Williamson County on the local airwaves, he’s offered airtime to those with whom he didn’t agree, but in the spirit of kindness and community,” Franklin Tomorrow Executive Director Mindy Tate said, reading from a submission identifying Lawrence for the award. “He has served on countless boards, quietly funded dozens of nonprofit efforts, and most likely, all with a smile on his face.

“Tom Lawrence is an individual who has been and is an agent of positive change and growth and sets an example for others to follow in his footsteps of initiative, imagination, and encouraging energy,” Tate added. “He has not given countless volunteer hours – he has given countless days, weeks and years to his beloved community.”

Sargent died in November 2018 but received the Legacy Award in July 2018 from Franklin Tomorrow, which was renamed in 2019 to the Charles M. Sargent Award following his death.

“It is with community leaders like Dr. McInturff that The Iroquois Steeplechase executes its mission of producing a world class race meet and giving to beneficiaries in the community such as Monroe Carrell Jr. Children’s Hospital and The Friends of Warner Parks,” wrote Autumn Ecklond, director of business development for the Iroquois Steeplechase, in her nomination.

McInturff has served on the Race Committee since 2017, but he has volunteered his services for decades.

“That statement says volumes about Monty, who humbly serves when asked and leads with his heart for community,” Tate said in presenting the Anne T. Rutherford Award to McInturff. “When Franklin Tomorrow created Friends of Franklin Parks in 2011, Dr. Monty McInturff led the organization from its infancy forward to becoming its own successful nonprofit, alongside a great board and a groundswell of community support.”

Goodall Homes was the recipient of the Corporate Volunteerism Award. Goodall Homes was nominated by Habitat for Humanity Williamson-Maury for their work with Habitat in the Williamson County/Maury County area, which estimates their donation is valued at more than $200,000 and represents more than 5,000 service hours.

Franklin Tomorrow Board President Allena Bell presented three awards during the event. The Family Impact Award was given to the Stinson and Baughman families for their work with One Generation Away, and to Dr. Robin and Anna Lapre for their work with the Williamson County Animal Center.

The Board Service Award was given to Cassie Jones, and the Notes of Kindness Award was presented to Ronald S. Ligon.

In the new category of Neighbor To Neighbor, four awards were given. The recipients of the Neighbor to Neighbor Award were Danny Cotton for his work with local Franklin churches; Dr. Dana Hardy for her work with End Slavery Tennessee and The Westhaven Foundation among other organizations; and Catering & Events by Suzettefor her work in the Franklin community during 2020.

In addition, more than 60 individuals who died during the last 18 months were honored during a special in memoriam program during the event for their contributions as volunteers and community leaders. Each person will be further recognized when a paver is installed at the Friends of Franklin Parks’ TSC Arena at the Park at Harlinsdale Farm, through the support of Williamson Memorial Funeral Home & Gardens, Friends of Franklin Parks, Franklin Tomorrow and an anonymous donor.