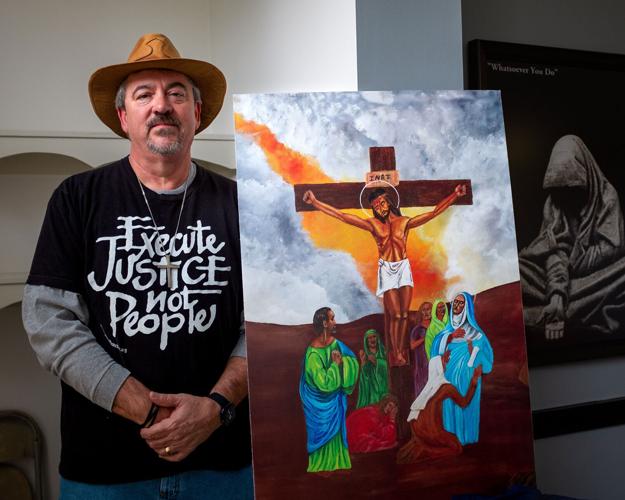 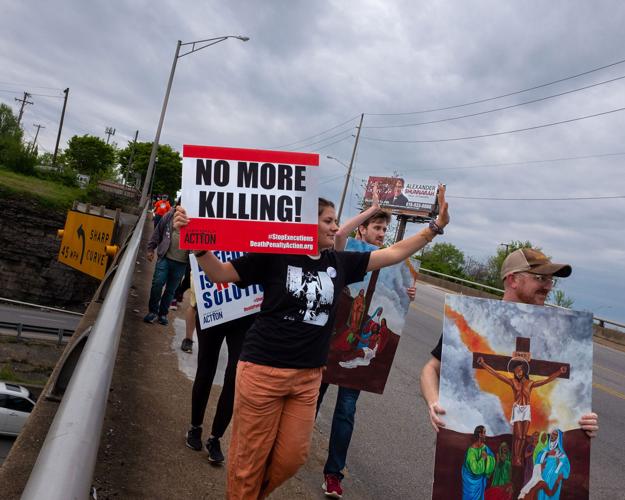 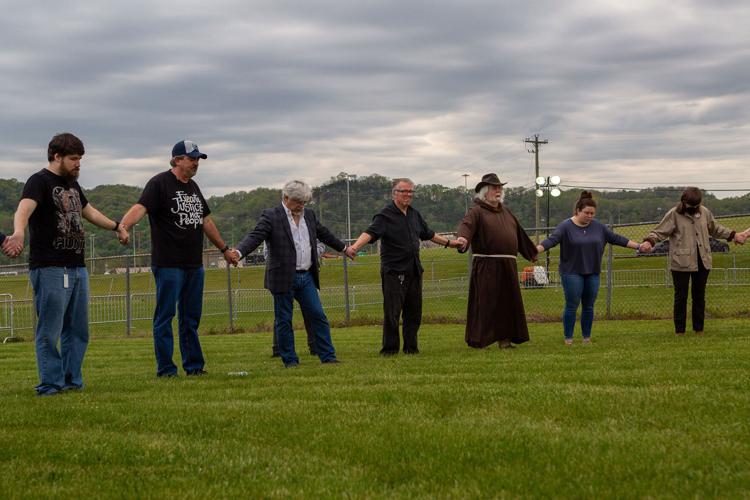 Anti-death-penalty protesters pray outside Riverbend on April 21, moments after the execution of Oscar Franklin Smith is suddenly and temporarily halted

Oscar Franklin “Frank” Smith was scheduled to be executed by the state of Tennessee at 7 p.m. on Thursday, April 21. Today, Smith is still alive.

At 72 years old, Smith is the oldest inmate on Tennessee’s death row. Roughly one hour before his scheduled execution, Gov. Bill Lee granted a “temporary reprieve” following an unspecified “oversight in preparation for lethal injection,” giving at least temporary hope to dozens of anti-death-penalty activists who gathered outside Nashville’s Riverbend Maximum Security Institution for a prayer vigil and protest. No further details on the apparent oversight have been provided.

Smith was sentenced to death in 1990 following his conviction on three counts of first-degree murder in the brutal 1989 killings of his estranged wife Judith Smith and her two sons. More than three decades later, Smith maintains his innocence.

Last week was some protesters’ first experience at such a vigil. For others, it was painfully familiar but especially significant — the state hadn’t performed an execution since the start of the pandemic. In February 2020, Nick Sutton was executed by electrocution before state killings were suspended due to the ongoing pandemic. In 2019, Leroy Hall Jr., Stephen Michael West and Donnie Edward Johnson were all executed during Lee’s administration.

In 2018, under the administration of Gov. Bill Haslam, David Earl Miller, Edmund Zagorski and Billy Ray Irick were all executed. Before that, there hadn’t been a state execution in Tennessee since 2009.

One of the protesters outside Riverbend on April 21 was Franklin Community Church senior pastor Dr. Kevin Riggs, who nearly a week before the scheduled execution helped lead an Easter Sunday protest march from the prison gates to the state Capitol. Marches like these have become a tradition before each execution.

Riggs was joined by more than 40 people from faith groups and activist groups, trekking some nine miles to Legislative Plaza, where an Easter service was held with a larger crowd. The march began and ended with prayers and music from participants holding signs and banners, some with protest T-shirts sticking to their backs on the humid, overcast afternoon. They walked from the industrial areas surrounding the prison through quickly gentrifying neighborhoods, across the Tennessee State University campus and between the office buildings that make up the downtown skyline.

Among the signs carried were 15 large prints of paintings done by death row inmates — depictions of Jesus carrying the cross, others of his limbs being nailed to the killing device, another of his resurrection. A little more than halfway through the march, the protesters suddenly came to a stop on a West Nashville sidewalk where one of the demonstrators placed a cellphone to a microphone, revealing the voice of former death row inmate Pervis Payne.

Payne, a Black man, was sentenced to death for the 1987 murders of a white woman and her young daughter before having his sentence reduced to two life sentences late last year after he was deemed intellectually disabled. Payne has maintained his innocence in the killings.

“I’m there with y’all in thought and spirit,” Payne told the group during the phone call. “It’s so beautiful to turn around, to feel the energy, you know, and the determination and sacrifice that this community family is actually doing. I wish I was there with you — you know, I would be embracing you all with every step for this cause. It’s so good to turn around and spend this moment with y’all.

“Y’all must remember, as y’all have extended y’all’s hand and time out for me, I am a miracle,” Payne continued. “That good things do happen. So on your walk, stay encouraged through your steps.”

Four days later, some of those protesters, along with others, gathered in Nashville between Riverbend and the nearby Lois M. DeBerry Special Needs Facility. They were there to mourn — and there was an obvious change in the spring air, a different tone than the Easter gathering’s energetic camaraderie and passion.

The Tennessee Department of Correction along with many state troopers — some on foot, some on horseback or in vehicles — set up security checkpoints and fenced-in areas. As with past executions, there were separate areas for those protesting the execution, as well as those rallying in support of it. But unlike during some past executions, the latter area remained an empty patch of grass.

“Unfortunately I’ve been through it before,” Riggs told the Scene Thursday. “It’s just a day of reflection and a day of quiet, and of heavy hearts for Oscar Smith, for our government, our society, for the victims, and I’m just reminded again that this doesn’t do anything. This is not justice — it’s revenge, and that Bible is clear about revenge.”

“The thought of this going on every other month until December is a little overwhelming,” Riggs said, adding that this was about the eighth execution vigil he’d attended. “It gets tougher every time, because it’s just the weight of everything.”

“Is this here?” Riggs asked a fellow protester before reading the text over again, cracking a smile that quickly spread wider across his face.

A group of around 50 had gathered at the prison by that time, with more expected before the vigil was cut short. The evening concluded with prayers spoken in a circle of attendees joined hand in hand. It was 6:20 p.m. when they filed out of the designated protest area at the urging of guards who seemed eager to pack up early.

Smith had already lived past his state-determined execution date two times before having the date set for April 21. This latest reprieve is effective until June 1, though a new date has not been officially set. Harold Nichols is currently scheduled to be executed for the 1990 rape and murder of Karen Pully on June 9.

On April 19, a little more than 48 hours before Smith was set to be killed, Gov. Lee issued the following statement:  “After thorough consideration of Oscar Smith’s request for clemency and an extensive review of the case, the State of Tennessee’s sentence will stand, and I will not be intervening.”

“I have to believe since [Gov. Lee is] a person of faith, that this weighs heavy on his conscience,” Riggs said. “And to be honest, I pray that he gets no sleep, that he’s restless, he cannot eat, he cannot function until he does the right thing.”

Riggs, whose own family has been victimized by murder, stressed that his efforts are rooted in his faith and are not meant to minimize the importance of the victims. He says he and his companions also, of course, pray for the victims, but it’s against his Christian faith to support capital punishment.

“For some reason in our society we think that if we kill somebody that that’s somehow or another going to teach that killing is wrong,” Riggs said. “So for me then, it’s a pro-life issue as well — that if you’re pro-life, that it’s inconsistent to be against abortion but for capital punishment.”

Riggs grew up in a faith community but came to his personal views and passion for advocacy later in life.

“I think that after doing my own prayer, my own study and reading books and looking at scripture as a whole from Genesis to Revelations, and especially the teachings of Jesus, I’ve concluded that the totality of scripture teaches against the death penalty,” said Riggs. “Jesus was executed by the state, and his execution should have ended all executions.”

Riggs spent some time with Smith prior to his transfer to death watch. Riggs and his parishioners have formed relationships with multiple inmates over the past near-decade, even ordaining one inmate as a pastor. Those relationships have reinforced for Riggs and his fellow advocates the preciousness of life. These men, he says — people whom he calls friends — are not always the same people who first entered the prison’s gates.

While Riggs and others were relieved that Smith would live to see another day, he argues that it is “cruel and unusual” to continually delay the man’s execution date.

“The drugs are horrible,” Riggs said. “That’s why there’s been lawsuits against it, there’s been botched executions across the country because of the drug protocol. … There’s no good, humane way to kill someone. There’s just not, and it just needs to stop.”