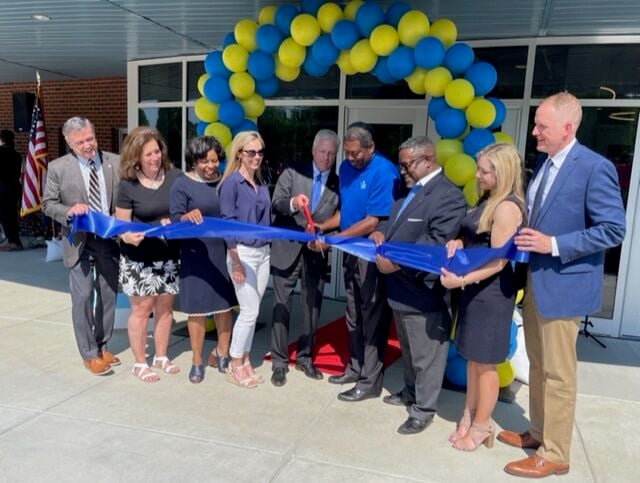 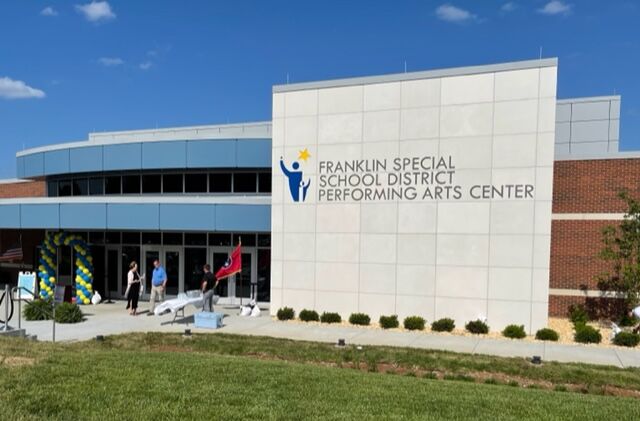 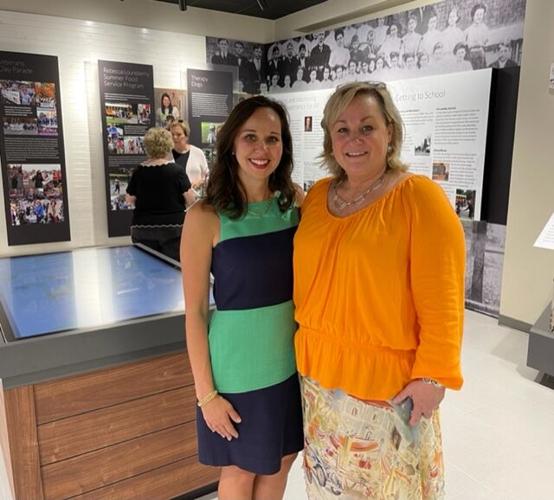 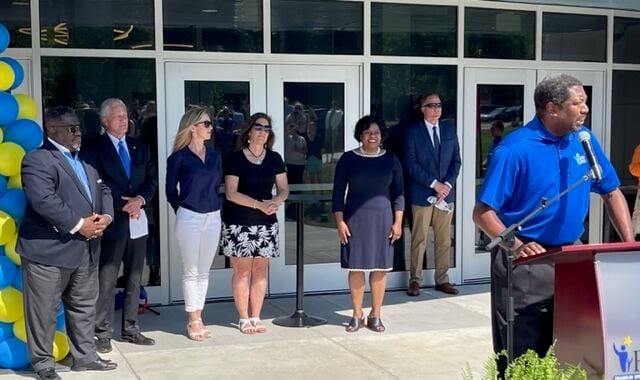 FSSD board chair Robert Blair speaks from the podium as board members (from left) Kevin Townsel, Tim Stillings, Alicia Barker, Robin Newman and Allena Bell, as well as Associate Director of Schools David Esslinger, look on. 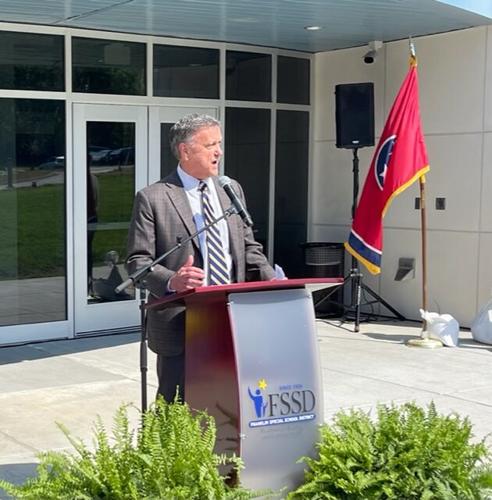 FSSD board chair Robert Blair speaks from the podium as board members (from left) Kevin Townsel, Tim Stillings, Alicia Barker, Robin Newman and Allena Bell, as well as Associate Director of Schools David Esslinger, look on.

With its sights on the future, the Franklin Special School District entered into a whole new dimension Friday.

Make that two dimensions, actually, as the district held a couple of ribbon cuttings for new additions that are now open and operational. Students, staff, Board of Education members and many others were on hand for ceremonies marking the opening of a new gymnasium at Poplar Grove Elementary School Friday morning and a “state-of-the-art” performing arts center later that afternoon.

The opening of the PAC marks a milestone for the district, according to a news release. It’s a 34,400-square-foot facility that seats 490 people. Seating surrounds a thrust stage, which extends into the audience on three sides, with a 120-square-foot proscenium.

The stage is equipped with a full 49-foot fly loft accessible by catwalks. The PAC also features dressing rooms, pre-performance spaces and prop rooms along with a building workshop, concessions stand, ticket booth and the Legacy Gallery.

The PAC was designed to showcase the seasonal school plays, holiday musicals and graduation ceremonies for all eight FSSD schools. Once fully operational and the school event schedule is set, it will also be accessible to the community and can be rented by the public for special events.

The Legacy Gallery, a 650-square-foot curated installation, came through project  leadership from Poplar Grove Elementary Principal Alisha Erickson and FSSD Communications Director Susannah Gentry. They were able to bring in the design team that had created a similar space at the Country Music Hall of Fame and Museum.

“Our new Legacy Gallery includes a history of FSSD since its inception in 1906,” FSSD Director of Schools David Snowden said at Friday afternoon’s event. “We wanted to be able to tell the story of FSSD from a historical perspective and to provide a space to continue the story now and into the future.”

Snowden said the PAC as a whole will benefit not only the teachers and students the district serves, but also the greater community.

“The Franklin Special School District places an intentional focus on educating the whole child,” he said in the release. “That means that we believe the fine arts are not only necessary but are a critical component of student learning.

“The new performing arts center will be open to all students, and its use will expand and enhance the exceptional programs that are a part of every school in the district. We look forward to this state-of-the-art facility providing students and community members with a meaningful way to participate in the arts.”

“This is a great day for the FSSD,” longtime board member Tim Stillings said during ceremonies for the new PAC. "Just this morning we cut the ribbon on this beautiful new gymnasium at Poplar Grove Elementary School.

“It’s been in the works for over 25 years. As a member of the Board of Education 25 years ago, I was on the committee that made a promise that this gymnasium would one day be built. So promise made, promise kept and today is that one day.”