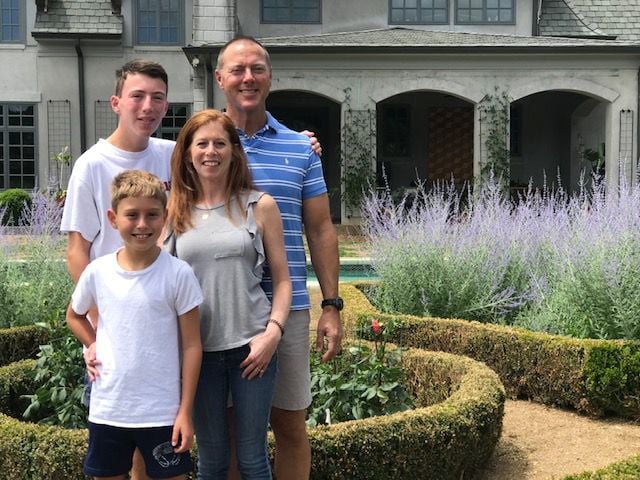 Jim Brackett stands with is wife, Jan, and sons Drew (back left) and Charlie in their parterre garden in the backyard of their Franklin home. 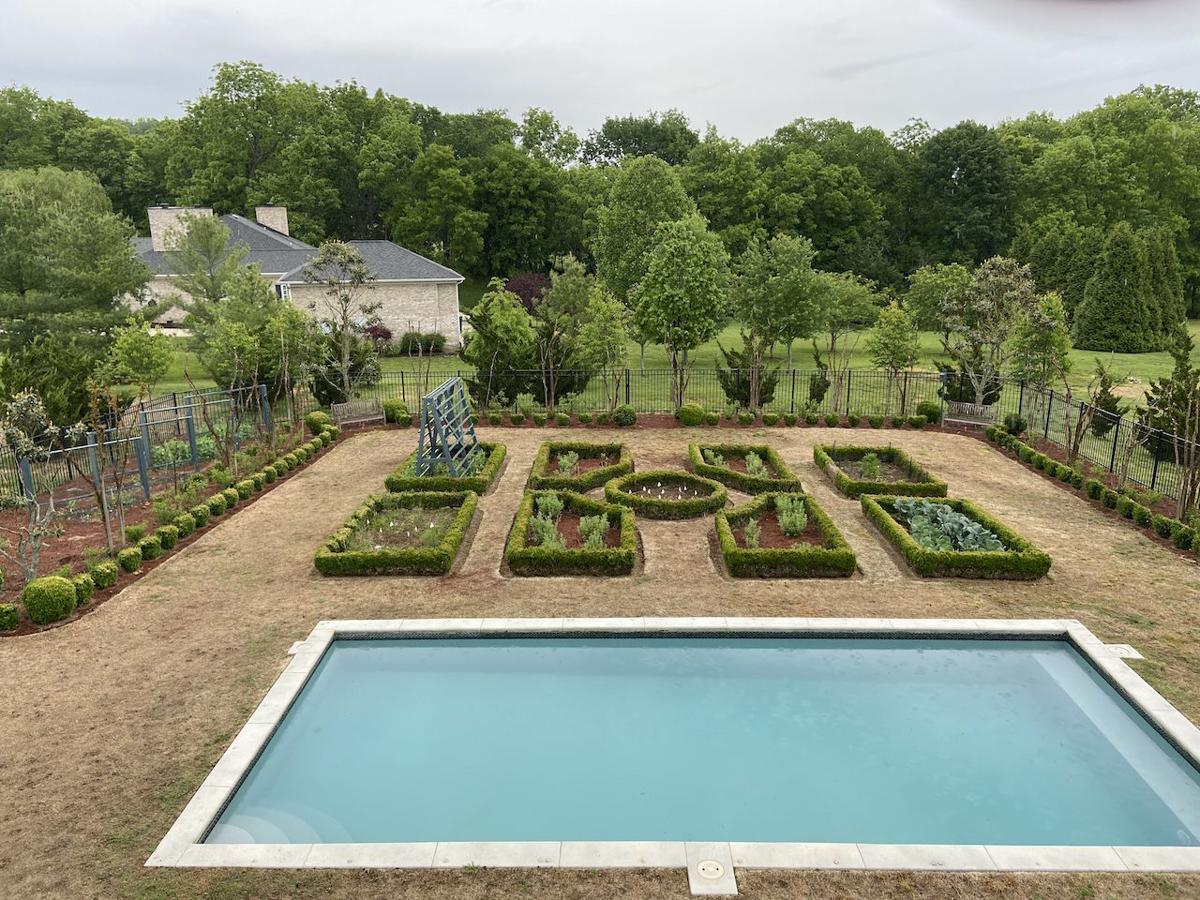 A ground-level pool is included in Jim Brackett's garden. 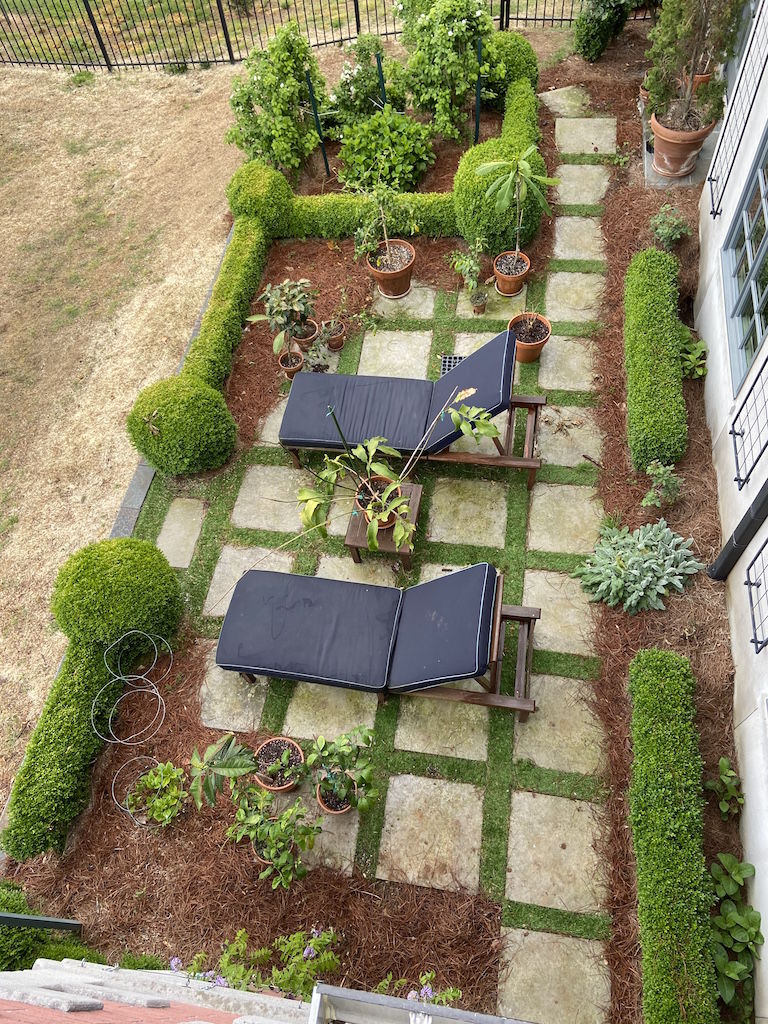 One section of Jim Brackett's is for relaxing in the chaise lounges he built himself.

Jim Brackett stands with is wife, Jan, and sons Drew (back left) and Charlie in their parterre garden in the backyard of their Franklin home.

A ground-level pool is included in Jim Brackett's garden.

One section of Jim Brackett's is for relaxing in the chaise lounges he built himself.

In the garden he began growing well more than a decade ago, Jim Brackett has planted beans, peas, tomatoes, lettuce, corn, squash, okra, onions and just about any other vegetable found in gardens across Williamson County.

But that’s where any similarities to those other gardens end. Brackett, who moved into his Franklin home with his family about 15 years ago, has created something in his backyard more akin to the Palace of Versailles than to a plot in Peytonsville.

“This lot was perfect for what we wanted to do,” Brackett said as he stood in his parterre garden surrounded by finely shaped boxwoods, an assortment of flowering plants and vines, a grass-level pool, and plenty of fresh edibles.

“Mine is Versailles on a budget. I’ve done all this stuff myself, and that’s probably not a lot of peoples’ cup of tea. But I enjoy doing it and I’m still young enough to do the labor.”

It has indeed been labor-intensive, Brackett said. He has had guidance from landscapers, plant experts and an architect, but he has handled the nuts and bolts himself along with help from his wife, Jan, and sons Drew and Charlie.

“It has all taken many, many years because it’s a heck of a lot of landscaping and we just couldn’t spend $100,000 on all this stuff all at once,” said Brackett, who owns his own software company that remotely monitors for toilet leaks in large hotels and assisted living facilities. “So it’s all taken a long time to come together. After you realize you can’t do it all at once, it’s kind of a pleasure to add the pieces. It could be this fall or maybe next spring, and I’ll be completely done. It will have taken 14 or 15 years."

Brackett said the influence for his garden — and, for that matter, his house — actually originated from a visit he and Jan made to a village in France named Chenonceaux not long after they had married. Each had traveled to the country before with friends and had stuck mainly in Paris and done “all the touristy stuff,” Brackett said.

“This time we wanted to go out more [from the crowds of tourists] and take day trips,” he added. “We ended up in this super-quaint village, and it was perfect weather and like one of those dream days. We found this house we loved that had this really neat garden, and it stuck with us.

“We found the house we wanted to build and raise our kids in.”

The Bracketts hired Nashville architect Mitch Barnett to design their home, one that would feature elements to make it livable for the 21st century while paying homage to its 16th century style. The garden followed in that vein.

While the concept of his parterre owes to history, some of his individual plants also hold stories from the past. One in particular is a night-blooming cereous that dates to the 1800s. Brackett said his housekeeper gave him a cutting from the plant that has ties to Adelicia Acklen of Belmont Mansion in Nashville. Acklen had entered her night-blooming cereous in a show in 1876, and around 10 years later the great-grandmother of Brackett’s housekeeper got a cutting from the plant.

“Our housekeeper’s mother still has the original plant bought in the 1880s,” Brackett explained. “It’s a large shrub. It’s pretty neat to have a cutting from a plant that is that old.”

Brackett shared several other stories about the plants and flowers and the general grounds of his garden. It’s easy to understand his passion.

“I’ve been interested in gardening going back to high school [in Harrison County, Kentucky],” Brackett said. “I always liked working outside. In high school I started planting roses and I planted a shade garden in our backyard in Kentucky. That’s where it started.”