From a committee of experts to a letter from the mayor, efforts to find a new location for longtime Williamson County ministry GraceWorks are well underway.

And Valencia Breckenridge, for one, is optimistic the search will be successful.

“I am hopeful because of the impact GraceWorks has had here and the warmth and generosity our community has shown toward us,” said Breckenridge, CEO for the 26-year-old nonprofit for the past five years.

“It has had an amazing impact, and we’re counting on our community to help us remain in this community despite the challenges of space and cost. We all know how expensive Williamson County is, but I also know it to be a very generous county.”

The building in south Franklin where GraceWorks has operated for the past 22 years is being sold, with the ministry’s lease expiring in June 2023. A search is on for space of at least 40,000 square feet that includes or could be retrofitted to include at least two truck bays, warehouse space, offices, conference room, retail space and 300-plus parking spaces, according to a press release from the nonprofit.

GraceWorks, which has a staff of 45 employees and engages with about 250 volunteers each week, is also looking for a permanent home option so it does not face the threat of displacement again. A gift of 6 acres or more would allow GraceWorks to plan to build a permanent home.

The ministry formed a relocation committee that includes board members as well as “concerned members of our community who have a measure of expertise in this area,” Breckenridge said.

And just recently, Franklin Mayor Ken Moore penned an open letter to the community in which he calls on business owners, churches and citizens of Franklin to help GraceWorks stay in its home city. 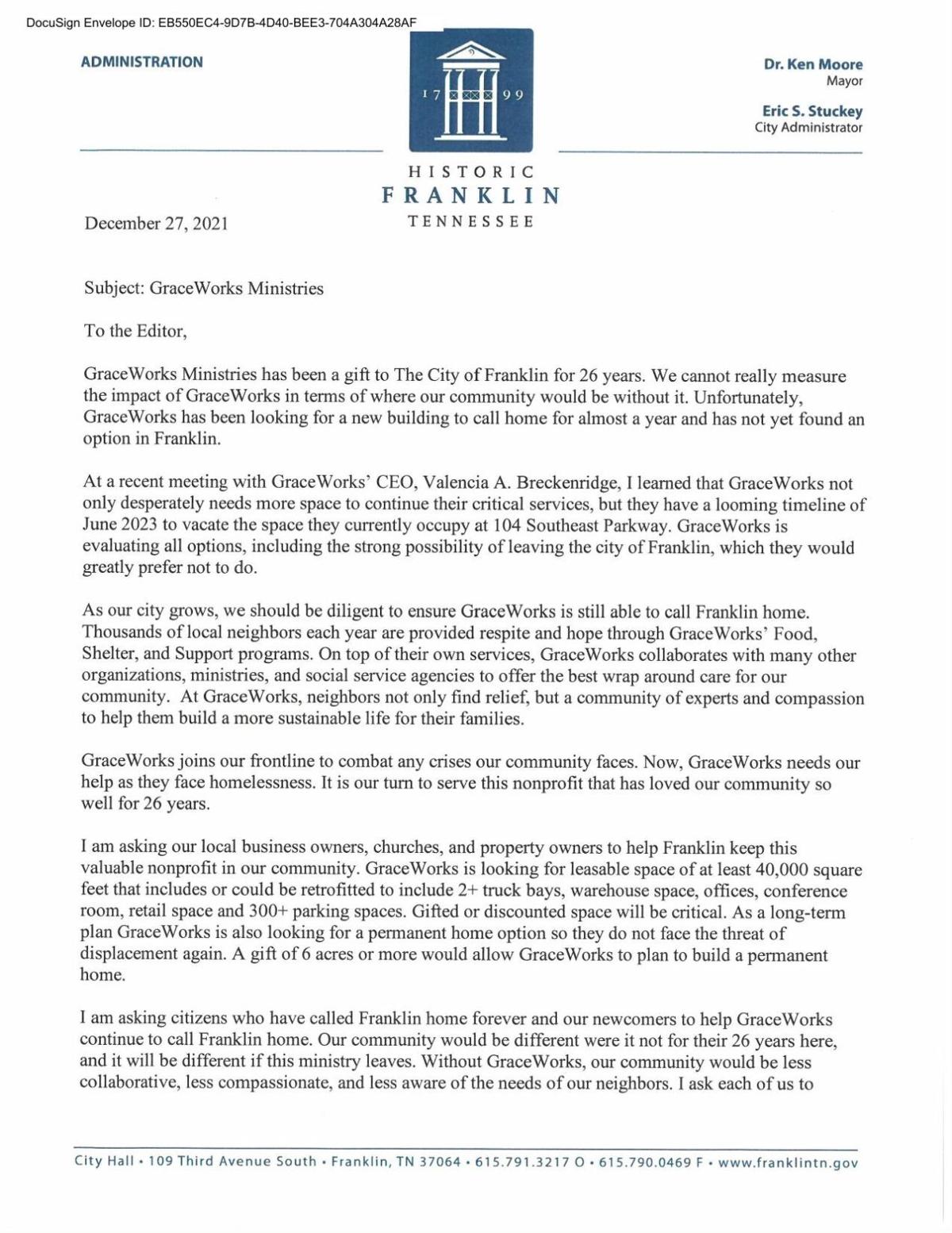 “We should be proud this innovative nonprofit whose concept of collaboration, emphasis on effectiveness and care for the dignity of our neighbors was founded in our own city,” Moore states in his letter. “Even now, their model is ahead of its time, but back when it was founded 26 years ago, it was groundbreaking.

“GraceWorks joins our frontline to combat any crisis our community faces,” Moore continued. “Now, GraceWorks needs our help as they face homelessness.”

Williamson County Mayor Rogers Anderson pointed out that the reach of GraceWorks goes beyond Franklin city limits and throughout the county, where it serves more than 11,000 people in need each year.

“GraceWorks Ministries is where life starts to get better for our citizens living in poverty,” Anderson said. “I am proud to call GraceWorks a Williamson County born-and-raised nonprofit and encourage our lifelong citizens and newcomers to support GraceWorks’ community resource centers.”