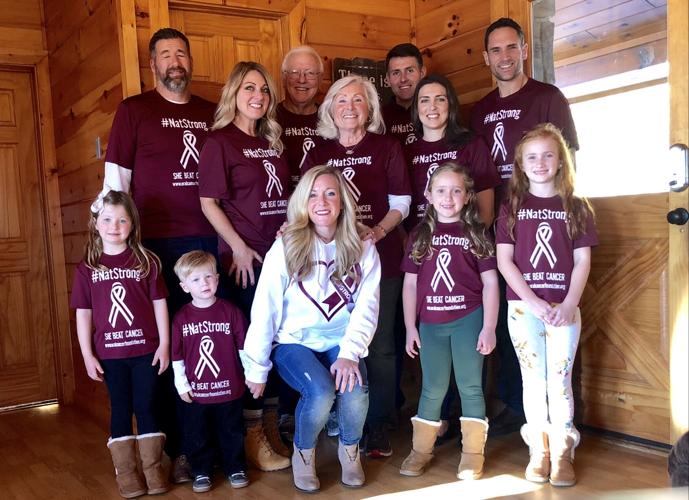 Natalie Hennes has been surrounded by family and friends in her quest to overcome oral cancer. 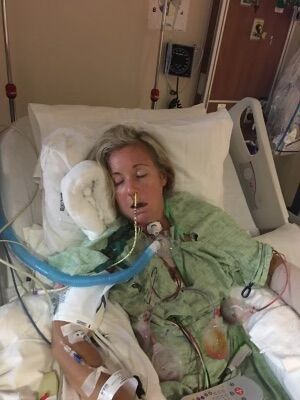 While in recovery from oral cancer surgery, Natalie Hennes had both a feeding and trachael tube.

In December 2020, a little more than three years since undergoing surgery and treatment for oral cancer, Natalie Hennes was sitting in a teachers meeting at Grassland Middle School when she suddenly felt flushed and noticed her heart was beating too rapidly.

She came close to passing out when the school nurse arrived and checked her blood pressure, which was dangerously high. Hennes was taken to the emergency room where she was treated for symptoms related to her heart.

It wasn’t that simple, however, as she found out later when she met with a cardiologist.

“[He] was not convinced that I suddenly had this heart problem, and he thought it might be related to the cancer surgery,” Hennes said recently. “When they did the cancer surgery, it not only removed cancer from my tongue and reconstructed my mouth with tissue from my arm, but they did a radical neck dissection to take out lymph nodes from my ear and throat. And when they did that, it hit part of my nervous system near the carotid artery. …

“I found out I had something called baroreceptor impairment, which sends faulty signals to my heart.”

That episode from a year and a half ago was one of a number of so-called side effects Hennes has experienced since she underwent a grueling surgery at Vanderbilt Medical Center in October 2017, a nine-hour procedure to remove a cancer known as squamous cell carcinoma of the oral cavity. It’s an aggressive cancer that can spread to the lymph nodes.

Hennes is now considered cancer-free, but the phrase doesn’t necessarily ease the physical and emotional trials she still endures. Just recently, for instance, gastronomical issues that be can be traced to her surgery sent her to the ER.

“It’s the stuff you don’t think about when you hear that you might be cancer free,” Hennes said. “With this specific cancer, it’s how it affects the afterlife and how it has affected my family, the fact that I had two really young kids when this happened.

“It’s such a mutilating cancer that affects such a prominent part of our bodies that make us human.”

Not a likely candidate for oral cancer

Hennes first noticed what she thought was a stubborn canker sore in her mouth in July 2017. Her dentist took a look at it and suggested she see an oral surgeon if the sore didn’t go away within a week.

Her surgeon, Dr. Cathleen Coyle in Franklin, did a biopsy, and she and her husband, Rob, were soon in Coyne’s office waiting on the news. Neither could believe at first what they heard.

“I was very confident it was just going to be something else,” Natalie said. “There are many things you can get in your oral cavities that aren’t cancerous. I say that, but then I also had a very deep, intuitive side of me that thought maybe it was cancer. On the surface, with my husband, I was trying to believe it wasn’t anything, but deep, deep down I had this weird feeling, and I don’t know why because I wasn’t a likely candidate for it at all.”

Natalie was 37 years old at the time, and had lived a healthy life. She’s a former Division I college soccer player, has worked as a personal trainer, never smoked and rarely drank alcohol. Her lifestyle led Rob to an optimism that everything would be OK.

“I was one hundred percent convinced that surely this cannot be cancer,” he said, “just based on her lifestyle, her age — everything about Natalie doesn’t fit with this profile. …

“My initial reaction was disbelief. I didn’t really grasp the grim news at the time. But I really think it sunk into me, because when the physician left the room, we did a Facetime call with Natalie’s parents. They took the news really hard.”

The invasive surgery to take out the cancer was performed Oct. 23, 2017, by Dr. Robert Sinard at Vanderbilt Medical Center, where he removed four of Natalie’s teeth, the gum line on the right side, the entire floor of her mouth, and 20 percent of her tongue. She then had reconstructive surgery by Dr. Sarah Rohde, and afterwards spent nine days in the ICU with a nasal feeding tube and a tracheal tube used for breathing.

Natalie came home on Halloween, with months and even years of recovery stretched before her.

Dealing with the after-effects

Natalie’s parents, Dr. Michael and Marsha Cox, came from their home in Maryland to provide care for her in the ensuing months. Dr. Cox is a retired gastroenterologist, and was able to give both professional and fatherly care.

Meanwhile, Rob tried to stay focused on his work in commercial real estate, but he had to balance that with his need to take care of Natalie and their daughters, Samantha and Maggie, now 11 and 9 respectively.

Rob and Natalie have both felt the embrace of other family members, friends, neighbors, teachers and more throughout their journey.

“You learn a lot about yourself when you to through these types of things,” Rob said. “I’m not a guy who likes to ask for help. I don’t want to bother other people even when I probably need it the most. I was forced into a situation where I had to ask for help. I had to accept help and I had to do it really fast.

“What I learned was, this community we live in and the outpouring of support everyone gives was overwhelming. Never in my life have I seen people reach out like that.”

The afterlife of cancer remains with Natalie. Just as she might have physical jolts such as with her heart and her digestive system, she is also emotionally challenged at times.

Her daughters are learning to cope as well.

“My older daughter gets anxious,” she said. “Although she's doing really well, she has opened up about her fear that when Mom gets sick again and goes to the doctor, she won’t come home again. They’re very real fears.

“Maggie is very much a caregiver, very smart and very intuitive. When I get sick, even if it’s just a cold, she’s very caregiving.”

Despite the obstacles she is still facing, Natalie is moving forward. She plans to return to Grassland Middle to teach English and language arts this next school year, and she’s staying active by playing as much tennis as possible and working out in other ways.

She is getting significant help for her ongoing recovery through her involvement in Gilda’s Club Middle Tennessee, a nonprofit dedicated to providing support, education and hope to all people impacted by cancer, including family members and friends of those diagnosed.

As for advice, she would strongly recommend to those who have similar circumstances, especially anyone who happens to notice something abnormal going on around their mouth, that they seek attention immediately.

“Don’t sit on it because this is a fast-growing cancer, and most likely what you have in your mouth is not cancer,” she said. “But if it is something, you want to get checked immediately by a doctor or an oral surgeon. It can be anything from a spot in your mouth to an earache to a throat ache to a tickle that doesn’t go away to a cough.

“The other thing is, be kind to anyone you know who’s going through anything medically. Day to day, I put on a very happy face. I get through my day fine, but I also know what I feel internally a lot, how I go through a day not feeling like myself. You just never know what someone’s going through.”

More information can be found through the Oral Cancer Foundation.