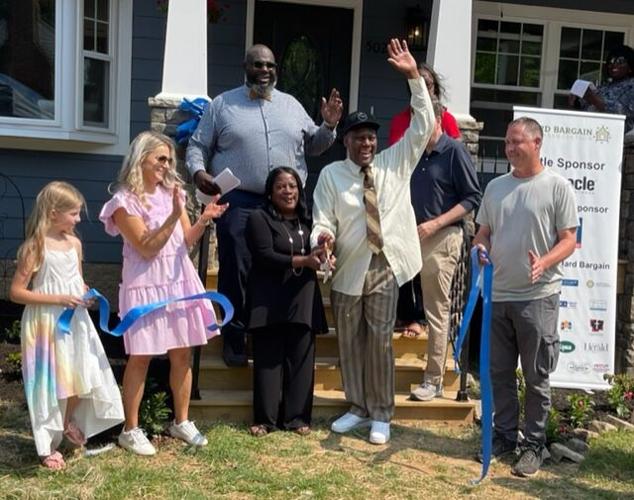 New homeowners Daniel (in tie) and Valerie Steele join others in celebrating at the ribbon cutting Saturday. 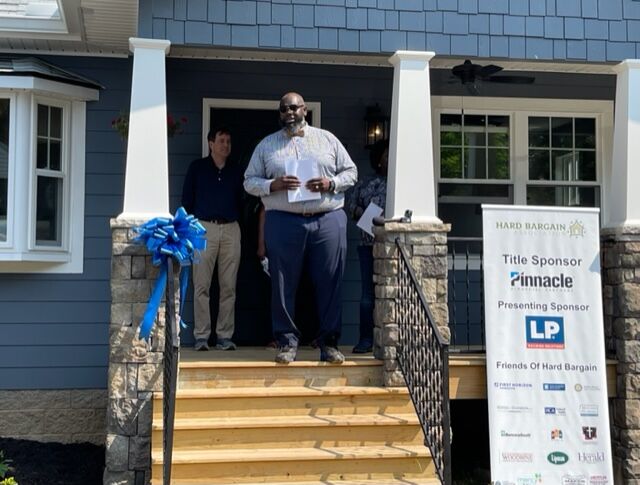 It took a team effort to make the most recent home in the Hard Bargain neighborhood move-in ready, and many from that team were on hand Saturday for the ribbon cutting.

That included, of course, the new owners of the renovated home, Daniel and Valerie Steele. They had applied for ownership about four years ago through the Hard Bargain Association to obtain an affordable loan, and both were beaming with pride as community leaders, ministers, elected officials, sponsors and others from the neighborhood and the Franklin community welcomed them to their new home.

Most of all, Daniel Steele said, the presence of God could be felt throughout the process.

“That’s the first thing that comes to my mind,” he said, “to thank God, because without God none of this would be possible. Everybody just came together to make this happen.

“I’m ready to give back to the community because they have given so much to us.”

Valerie and Daniel both grew up on nearby Natchez Street. They eventually moved away, but kept a desire to one day return to their hometown.

When they did come back to Franklin, they rented a place — and watched as that part of their monthly budget grew and grew.

"Our monthly rent kept increasing, and it seemed like everything in the area was going up except for your income,” Daniel Steele said. “We noticed, when we returned home, there weren’t any more middle-class affordable homes in Franklin.

“We thank the Hard Bargain Association for guiding us through the home ownership process in the midst of the COVID-19 pandemic. Our new home wouldn't have been possible without you."

Derrick Solomon, executive director for the Hard Bargain Association, led Saturday’s celebration. Among the partners in attendance were Jared Meitzler, the builder of the home located at the corner of 11th Avenue and Glass Lane, and Erin Leaverton, a Franklin interior designer who donated her services to the completion of the home.

“I prayed about this,” Leaverton told the audience. “I said, ‘Lord, I want to help people whoever they are, wherever they live, to be a part of preserving the story of community.’ Hard Bargain is one of the most important pieces of this community, and many, many people actually don’t know about it. So I wanted to partner with Derrick and anyone he is working with to help preserve this story because this is part of who we are.”

The Steeles’ new home was the 14th in the Hard Bargain neighborhood to be renovated and sold at an affordable price. David Crane of Crane Builders built the first 13 homes.

The Hard Bargain neighborhood was established in 1875 when Harvey McLemore, a freed slave, subdivided 15 acres which he purchased from his former owner, Judge W.S. McLemore.