Harpeth Hall’s student body is no longer entirely female, forcing the administration to define its 157-year-old commitment to all-girls education.

The elite college prep school enrolls students from fifth to 12th grades and traces its history to 1865. In the past few years, nonbinary students (who do not identify exclusively as male or female) and trans students (who were assigned female at birth but identify as male) have publicly acknowledged their gender identities, prompting calls for a clear policy on gender inclusion from the school.

Harpeth Hall has yet to formalize any public policy or statement about gender diversity. According to the school, gender diversity has been an internal focus for more than six years.

Alums recall a school environment in which breaking the gender mold could invite bullying. Nonbinary and trans youth are at risk for much higher rates of anxiety, depression and suicidal ideation than their cisgender peers. Gender is front and center. So, students say, why not talk about it?

“There was never really any conversation, and it wasn’t even a choice really to have that conversation,” a recent alum, who spoke on a condition of anonymity, said about gender identity at Harpeth Hall. This alum does not identify as female and came out after graduation. “I feel like I would have been ostracized. But I do see that Harpeth Hall can serve as that space. They already have the infrastructure to talk about these kinds of things. The faculty has been really supportive, and the teachers are absolutely amazing. Yet the fact that the school hasn’t said anything is frustrating — they prefer to stay out of it, like they’re afraid of pissing off donors or wading into territory that’s uncomfortable for them.”

Small tweaks indicate that the school is reconsidering traditions that no longer serve students. The school’s yearly George Washington Day, nixed in 2020, included historical reenactments of scenes of colonial America staged by Harpeth Hall middle schoolers. The 2022-2023 dress code will include pants, which the school explains as a “common wardrobe staple for professional women.” Some students see the change as a roundabout concession to students’ pushback against the school’s structural femininity, a stopgap while the school crafts something more explicit.

At the same time, the administration used names on students’ birth certificates at this year’s graduation — a practice known as deadnaming for individuals who have adopted different names accompanying a gender transition.

Gender reckonings of the mid-2010s hit historically women’s educational institutions across the country, leading to admissions changes and formalized gender diversity policies. Every school did it differently. After students precipitated an existential examination at Mount Holyoke, a historically all-women liberal arts college in Massachusetts, the administration organized open houses, town halls, panels and committees, updating policies in 2014. Now it excludes only cisgender men. Barnard, a historically women’s college in New York City, updated its admission policy in 2015 to welcome anyone who identifies as a woman, explicitly including trans women and excluding trans men.

When asked about admissions criteria, Harpeth Hall reiterated, “Any student who identifies as female may apply.”

Students and alums see the school’s lack of clarity as a missed opportunity. Many take the view that school leadership prefers to leave classmates in limbo rather than take a stance on gender that might provoke a donor base that skews more conservative than the student body. Board chair Crissy Wieck — a 1996 alumna whose husband, Matt Wiltshire, is running for mayor — directed questions to director of marketing and communications (and former Tennessean reporter) Jessica Bliss.

“We — like most girls schools in the country — are discussing our philosophy to provide greater clarity and transparency around gender identity,” Bliss said. “We hold true to the fact that an inclusive educational environment for girls is a hallmark of Harpeth Hall’s educational excellence.”

Other Nashville schools could also face similar questions. “We are not going to participate in this particular article,” administrator Sharon Huber said on behalf of St. Cecilia. Montgomery Bell Academy, Harpeth Hall’s historically male counterpart, has not “dealt with that” according to head of school Brad Gioia. “We know that could happen at any time, but it has not happened,” Gioia said.

An email was sent to parents of Harpeth Hall students on Tuesday morning with the subject line "Affirming our girls school mission." In the email, administrators note that "school leaders and trustees began concentrated discussion around gender identity more than six years ago," and that for the past year-and-a-half, "the DEI Committee of Harpeth Hall’s Board of Trustees has worked — at the request of school leadership — to create a philosophy that provides greater clarity and transparency around gender identity at our school."

Also included in the email is a link to Harpeth Hall's "Gender Diversity Philosophy," which outlines the school's commitment to remaining an all-girls school and providing "a safe environment to partner with each student and family to consider the needs and requests of the student on an individual basis." See the statement in full below. 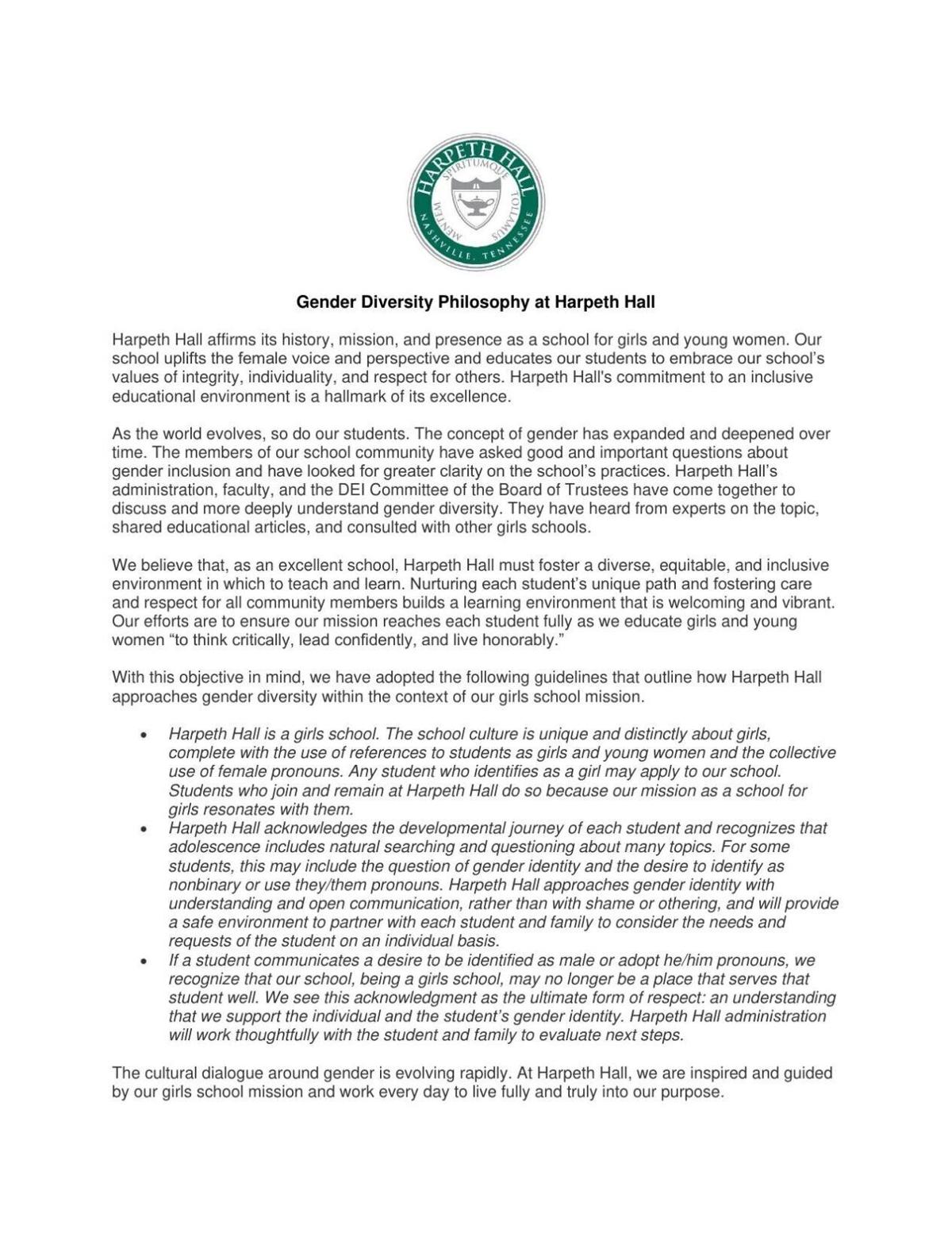